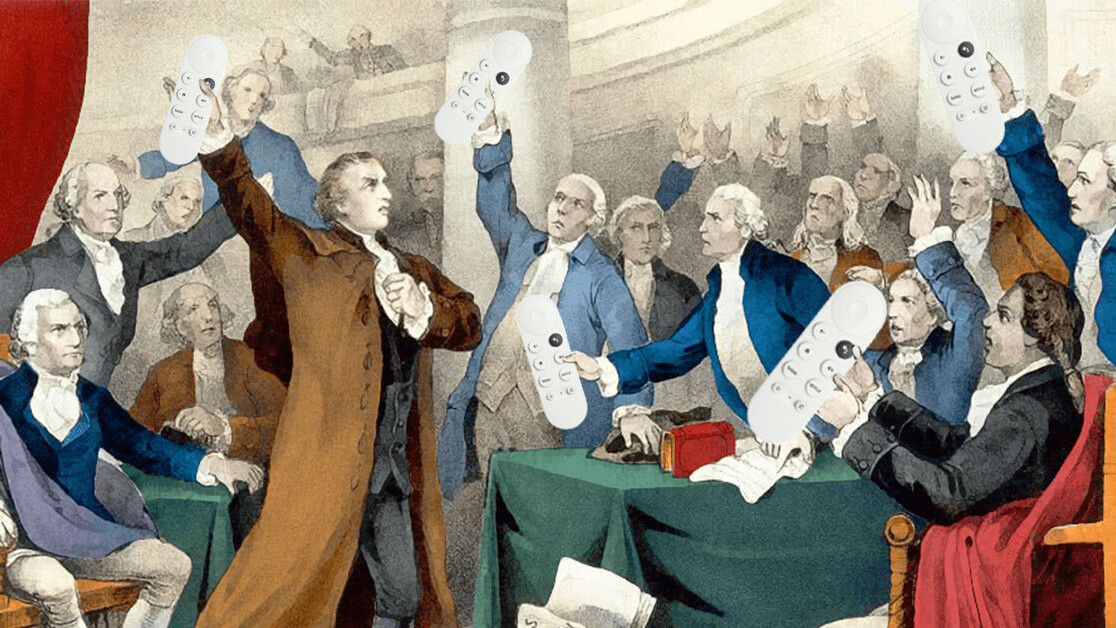 Autumn — the most distinguished of seasons — brings with it predictable trends: steaming pumpkin spiced lattes, slippery leaves layered across pavements, and a deluge of companies announcing new shit in the run up to Christmas.

Last month it was Apple’s event. The other week it was Google’s turn. And the search giant did us proud. Well, as proud as a billion-dollar company that’d sell all of us for animal feed if given half-a-chance can make anyone

In just 30 minutes it announced the Pixel 5, the Pixel 4a 5G, and the Nest Audio. But there was one thing that got me really clammed up (at least more clammed up than usual, I’m what the experts in the medical industry would refer to as a ‘sweaty lad’): the new Chromecast.

Thoughts of the new Chromecast have stalked me endlessly since the announcement. It isn’t just the updates to the streamer itself (4K HDR support for $50? Seriously? Yes-fucking-please; throw my body on a log fire and use its smoking remains as part of the process to choose a new pope who, in honor of my sacrifice, will dedicate their life to thanking the lord for delivering such a righteous device) — it was the fact the new Chromecast now comes with a remote.

Remotes, I feel, have a bad rep. The word brings to mind musty rooms of the aged, their spidery hands with web-like skin grasping tea-stained controllers with increasing sorrow as they fail to set the TV to a reasonable volume. The word brings up images of the 90s, of universal remotes, of separate controllers taped together in a way that screams SOFA MASTURBATORS through snack-stuffed mouths. Effectively, what I’m saying is remotes are of the past.

But this is wrong. Incorrect, in fact, and I will never forgive you for what you’ve said. Long live remotes. May they be granted immortality. Make a 200M tall statue of a remote from pure gold and have it shoot flames of praise across the Earth’s surface. And let me tell you why.

When the Chromecast first dropped it felt revolutionary Using your phone to send ThunderCats clips straight your TV was magical. Who needed a remote? Or a user interface? Phones forever! Apart from literally the opposite of that.

As much as I liked the old school Chromecast, using it as my main TV media driver became as irritating as typing with uncooked meat; yes, it got the job done, but at what cost?

The remote-less Chromecast consistently interrupted my phone use. It made collaborative watching tough, as it’s hard for a group to decide on a movie if only one person is looking at the options (“yeah, weird, Netflix literally only has Jason Statham films now”).

More than anything though, the lack of a remote and a proper user interface made browsing for something to watch feel unnatural.

It was during these “watching TV with my phone” years that I realized I love remotes. May they always exist.

Indeed, forever give me a dedicated bit of plastic with only one purpose. Hell, deliver me multiple remotes for every product I buy. Remove my furniture and fill my house with remotes until it’s overflowing and I’m no longer able to live there so end up sleeping in a bush before getting featured on a reality TV show and spending the appearance fee on even more remotes. Yes, give me precisely that.

Before we wrap this up, let’s get something out of the way: does this gushing mean I love every remote? God no, who do you think I am? There are some truly awful examples of the tech, but that’s a subject for another newsletter. I like to think of remotes like sunsets, yeah you can have an awful time watching one, but it’s actually pretty decent whatever’s going on. Sometimes, things are just Good™.

What I’m saying is this: blessed be Google for finally seeing the light and including a remote with its newest Chromecast. But if it decides to remove it from future models? Well, it’ll have to pry that remote from my cold, dead, and clammy hands.