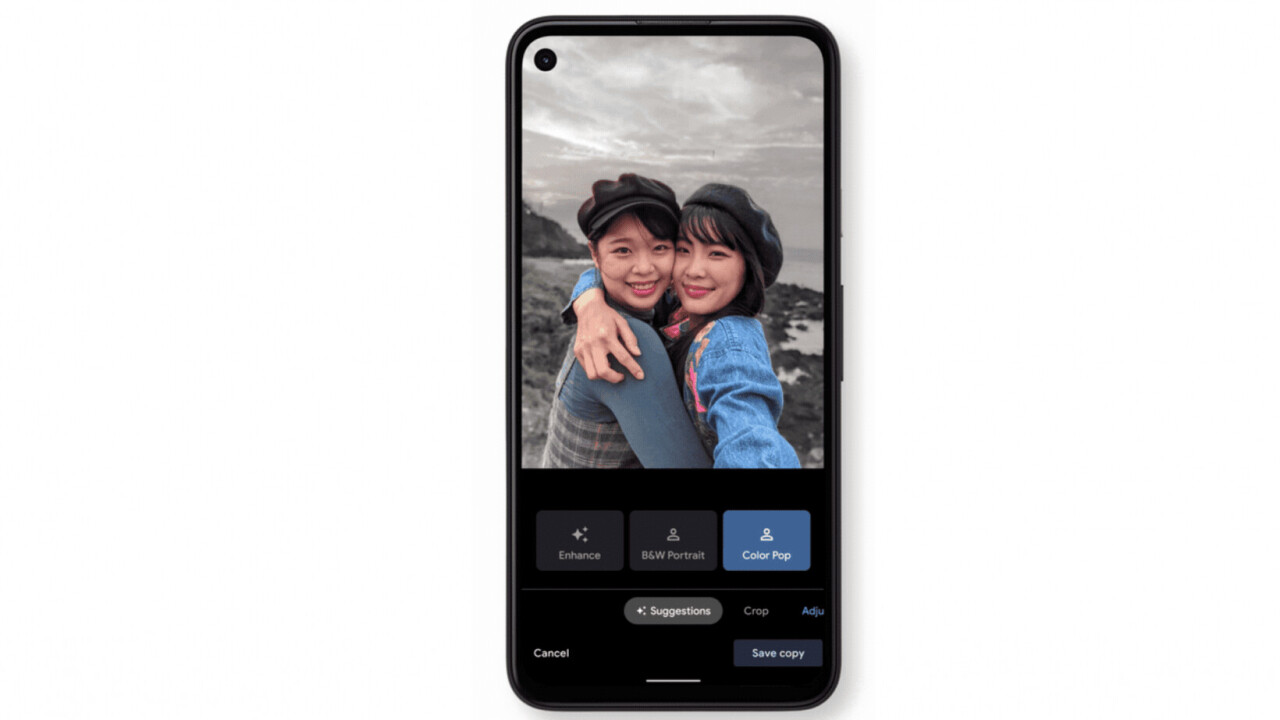 Yesterday might’ve been all about the Pixel 5 and its budget-friendly sibling, the Pixel 4a 5G, but those were certainly not the only new things Google unveiled.

In a blog post, the company explained the app now uses machine learning to offer automatic suggestions tailored to the specific photo you’re editing. The new feature aims to make your photos “pop” more and also comes with a user interface that lets you further tweak the AI‘s suggestions manually.

The bolstered editor, which resides in the Suggestions tab in Google Photos, currently supports only three modes, but the Mountain View giant promises more are coming in the future, including special options for “portraits, landscapes, sunsets.”

For the time being, though, you’ll have to settle for “Enhance” which touches up your pics, the self-explanatory black and white portrait mode, and “Color Pop,” which separates the foreground from by toning down saturation in the background. It’s pretty basic, but hey — I’m willing to give it a go.

Personally, I find the Color Pop effect Google showcased in its blog post a little overdone. It almost sucks out all of the color from the background, which in all fairness could be a style some users prefer. The good thing about the revamped editor is that you can always choose to additionally modify the settings yourself, instead of straight-up committing to the look.

Another new feature is the addition of a dedicated Portrait Light mode, which uses machine learning to let you artificially manipulate the source of light in a photo (this is your cue to smirk condescendingly, iPhone users). The unfortunate bit? It’s only coming to the Pixel 5 and 4a 5G, so unless you’re planning on grabbing one of Google‘s new handsets you’re out of luck.

My colleague Napier already spoke about the new feature here, so I’ll spare my thoughts — other than the fact I wish Google expanded it to more phones.

Anyways, the new Google Photos is already rolling out to Android devices, so you should spot the changes soon enough. What about an iOS update, you might wonder. Welp, no word from Google on that front, but we’ll keep you posted.