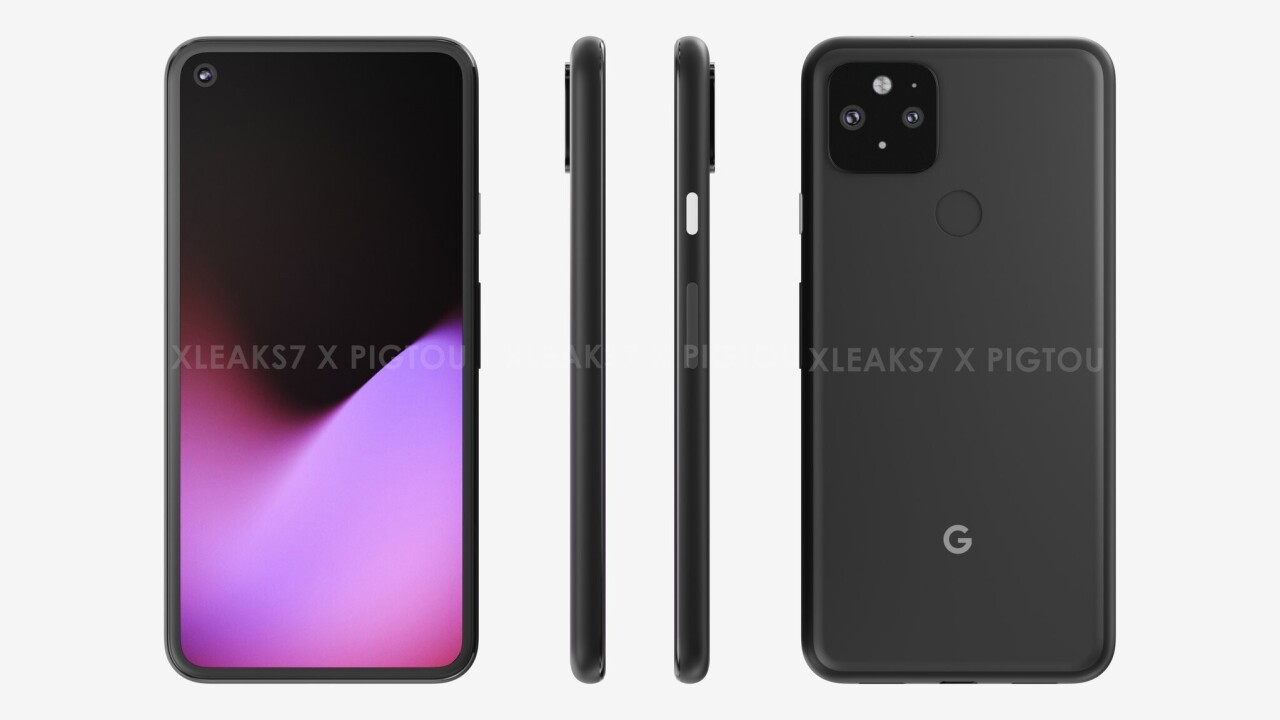 While we’re still waiting for any confirmation of the Pixel 4a’s announcement date, we’re already starting to see alleged leaks of the upcoming Pixel 5. Case in point: today supposed renders of Google‘s upcoming flagship began to make the rounds… and it looks decidedly uninteresting.

The renders are courtesy of Pigtou and leaker @xleaks7, and they display pretty much the most uninteresting phone Google could have possibly come up with: a phone that looks almost exactly like the Pixel 4 that preceded it.

The only notable differences are that Google seems to have abandoned facial recognition biometrics for a tried and trusted fingerprint reader, and as a consequence, the company is able to use an almost bezel-less design. The phone would instead use a hole-punch selfie camera, like just about everyone else.

The renders are supposedly based on CAD files for the Pixel 5, and suggest the device lies somewhere in between the iPhone 11 and iPhone XS in terms of size. Pigtou also clarifies that the renders are of the Pixel 5, as opposed to the supposedly-canceled Pixel 4a XL. And in case you’re wondering: no, Google did not bring back the headphone jack. Unfortunately, the leak isn’t totally unrealistic. Rumor has it that after meager sales of the line and the departure of the camera system’s head honcho, Google was rethinking its approach to the Pixel line.

The company is alleged to stop focusing on flagship-level specs, instead rumored to opt for a mid-high tier Snapdragon 765 chip instead. That system offers largely the same features as its more powerful 865 sibling while, of course, being cheaper. The heart of the pixel system is in the camera and software, and it doesn’t need the most powerful hardware to provide some of the best photos and smooth performance on the market — the company’s phones have already tended to lag behind Android competitors anyhow.

If the company was indeed aiming for a lower price point, it might make sense to not want to change up its design too much. Still, I’d hope for a little more effort than what these leaks seem to show. After all the criticism the company received for omitting an ultra-wide camera, I find it incredibly hard to believe the company would choose to leave it out on the Pixel 5.

Moreover, each generation of the company’s phones has featured a very different design to its predecessor. It seems strange that Google would hardly change anything with the Pixel 5.

On the other hand, I’d take this leak with a very healthy dose of skepticism. @xleaks7 only has a few leaks under his belt, and OnLeaks, an established leaker with an extensive track record of sharing early renders that are pretty close to the final product, says he received the same Pixel 5 leak ‘weeks ago’ but decided against sharing it as it seemed ‘very doubtful:’

Well, I received that alleged #Pixel5 weeks ago but I decided not to share it as it’s seems very doubtful IMO…

Let’s hope those doubts are true.