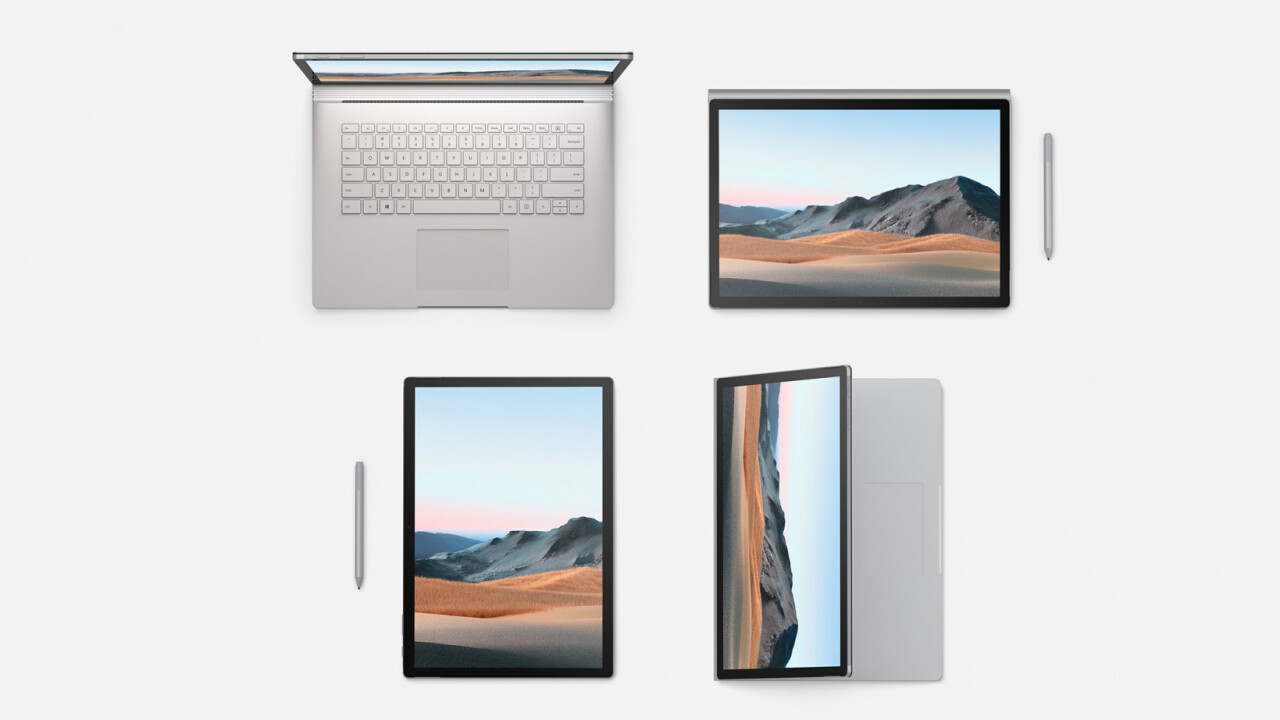 After weeks of rumors and leaks, Microsoft today announced the Surface Book 3. It’s up for pre-order today starting at $1,599, and will be available starting May 21.

Given the current state of the world, Microsoft did not hold a physical event for the launch (the company said it was canceling all gatherings until 2021). We’ll be going hands-on with press samples soon, but in the meantime, there isn’t too much new to go ‘hand-on’ with anyway; the Surface Book 3 is mostly just a spec bump.

But it’s a welcome spec bump. The Surface Book 2 was getting a bit long in the tooth, announced in October of 2017. And though it received a minor spec bump in 2019, it was still behind the curve considering it’s Microsoft‘s premium laptop.

Both the new 13.5 and 15-inch Surface Books feature Intel’s latest 10th-Gen U-series processors, bringing them up to par with competing convertibles. Maximum RAM has been bumped up to 32 GB, and storage configurations go up to 1TB (13.5-inch) or 2TB(15-inch). Microsoft says it’s using the “fastest SSD we have ever shipped,” too.

The choice of processor might disappoint Surface fans who were hoping to see more of the AMD relationship Microsoft started with the Surface Laptop 3. It would have been interesting to see Microsoft leverage the extra cores for workstation duties. And for buyers of the 15-inch model, the 15W U-series chips might also be a sore point considering most premium 15-inch laptops use more powerful 45W H-series processors.

Conversely, going for lower power consumption has long given the Surface Book family an edge in battery life; Microsoft says you can get up to 15.5 or 17.5 hours “of typical device usage” on the 13 and 15-inch models, respectively.

As usual, the Surface Books differentiate themselves by offering relatively powerful graphics cards for their form factor. The 13.5-inch model can be configured with Iris Plus or an Nvidia GTX 1650 Max-Q GPU. The 15-inch model starts out with a GeForce® GTX 1660 Ti, but new to the fray is the option for a Quadro card. Users requiring more computing power from their GPUs or who want ray-tracing capabilities now have the option for a Quadro RTX 3000.

To make that point, Microsoft even rendered its latest promo video on the Surface Book 3:

Raw performance aside, Microsoft also says its enhanced the far-field microphones and that the laptops now feature Dolby Atmos sound. But otherwise, it appears to be the same basic Surface Book design we’ve seen since the 2015 original. It’s still one of the unique pieces of hardware on the market, but I can’t help but feel the design is getting a little long in the tooth. Smaller bezels would be nice, at least.

We’ll be getting some hands-on time with the device soon, so stay tuned for more.