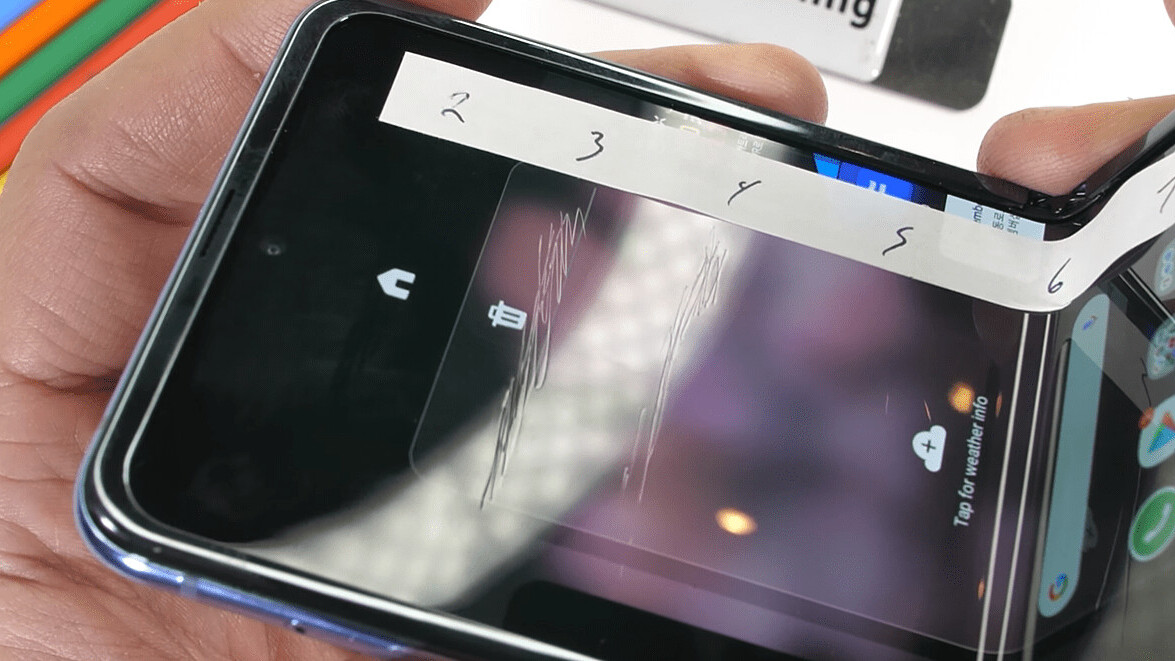 When Samsung announced the Galaxy Z Flip would be the first phone to use “ultra-thin glass,” I had just one big question: would it hold up to JerryRigEverything’s scratch tests? Would it, as with virtually every glass phone ever, “scratch at a level six, with deeper grooves at a level seven?”

Zack Nelson (that’s right, his name isn’t Jerry), put the phone through his usual gamut of durability challenges. These including a bend test, dropping sand into the hinge, and of course, the scratch test. Disappointingly, the phone scratches with literally the same ease as a regular plastic screen, starting at a level two on the Mohs hardness scale. That means you can literally scratch the screen with a fingernail, as Nelson cringe-inducingly shows in the video. It also seems it is rather easy for a sharp object to poke the screen and damage the OLED pixels underneath.

I’m no material scientist, but if it bends like plastic and scratches like plastic, I’m going to go ahead and assume the screen is mostly plastic. As Nelson points out, it’s possible the screen is embedded with glass bits, which might help with the vibrancy of the colors or the texture of the material. More likely it seems Samsung truly is using an ultra-thin layer of glass, with a protective plastic layer on top. We’ve reached out to Samsung for clarification, but the company told The Verge:

Galaxy Z Flip features an Infinity Flex Display with Samsung’s Ultra Thin Glass (UTG) to deliver a sleek, premium look and offer an immersive viewing experience,” a spokesperson said by email. “Samsung’s first-of-its-kind UTG technology is different from other Galaxy flagship devices. While the display does bend, it should be handled with care. Also, Galaxy Z Flip has a protective layer on top of the UTG similar to Galaxy Fold.

The company also offers a one-time screen replacement for $119, and will soon offer an optional-but-free service for installing a screen protector on the device (on top of the existing protective layer). On the plus side, the flexible screen means it shouldn’t shatter too easily, and since it’s usually protected from the elements in its folding form, you shouldn’t have to worry about random objects in your pocket scratching the screen. The company has also seemingly made major improvements to the hinge, as little bristles inside it help to resist and expel dirt.

That’s all great, but whatever the screen is made of – given the lackluster scratch-resistance in practice – it seems disingenuous to market the screen as glass. Glass has become so popular on phones precisely because it is more resistant to scratches than plastic. So Maybe don’t flaunt your phone’s ultra-thin ‘glass’ if it doesn’t actually withstand scratches like glass.