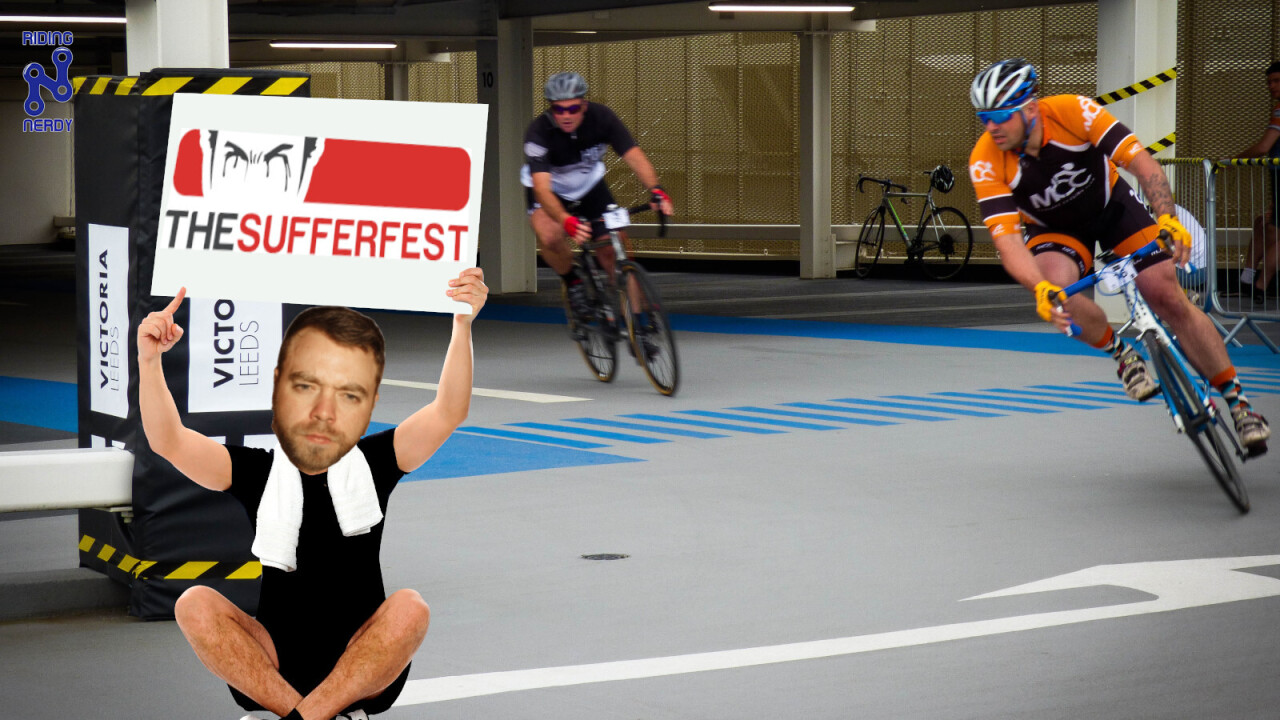 In November last year, I started using Zwift, an online gaming-come-indoor cycle training platform. Whilst still remaining very much in a niche, over the past few years its popularity has exploded in the cycling world. But it’s not the only option, and it certainly wasn’t the first digital tool designed to take the monotony out of cycling indoors.

After finishing a six-week training plan on Zwift, I thought I’d try out “The Sufferfest,” an online training platform that uses real life footage from famous international bike races to motivate users. Like Zwift, it’s $14.99 a month.

Sufferfest has actually been around for quite a while. It first spawned as a collection of exercise videos designed to guide indoor bike trainer workouts. Back in these early versions, the user would have to adjust their bike trainer’s resistance to coincide with the instructions on screen to perform the workout. The instructions, music, and carefully curated video really took the monotony out of training indoors.

The latest incarnation of the Sufferfest, though, builds these videos into an app (Mac, Windows, and iOS compatible) that has a whole host of interactive features, too. When playing a Sufferfest video, the app can control the resistance of a smart bike trainer meaning the rider just has to ride along and do as they’re told, kind of like Zwift.

How does Sufferfest compare to Zwift?

I should point out, despite largely being targeted at the same people and doing fundamentally the same thing, Zwift and Sufferfest are quite different platforms.

Zwift focuses itself on the gamification of training, whereas Sufferfest just wants to make you — as the name suggests — suffer. But this isn’t a bad thing, road cyclists love to suffer. By using iconic race footage and on screen motivational quotes, Sufferfest manages to cultivate an engaging and motivating experience. But it’s more stick, compared to Zwift’s carrot.

While Zwift allows riders to log in and just ride around the virtual world as they please, Sufferfest is built entirely around focused training sessions. There will be no aimless gambling about Sufferlandria! (I should explain, the Sufferfest is a bit of a cult in the cycling world, with its own dedicated community of “Sufferlandrians.” People who love to suffer, by proxy, come from Sufferlandria, the virtual country that plays home to these digital masochists.)

Zwift and Sufferfest, both deliver pre-made workouts which control the session’s duration and intensity. They deliver everything from easy recovery rides to intense, super high-intensity anaerobic interval sessions.

However, at the moment, you can’t make your own workouts on Sufferfest, but you can on Zwift. Last year, Sufferfest said that a workout builder is on the way, though.

Another key difference between Zwift and Sufferfest is how it programs a given workout so that it’s the same respective difficulty for every kind of rider, making sure everyone gets the most out of their training.

Lay your cards on the table

Before starting, Zwift recommends you take either a ramp test or a 20-minute functional threshold power (FTP) test. Both these tests are designed to find out how hard you can ride for one hour, your “aerobic capacity.”

Devised by sports scientist Dr Andrew Coggan, these types of tests have been used by cyclists since power meters became a thing in the 90s, but they’re not necessarily good indicators of a cyclist’s complete ability. FTP tests are only an indicator of an individual’s aerobic capacity, they do little to suggest a rider’s peak power, or their ability to make, and recover from, repeated hard efforts.

The Sufferfest takes a different approach to fitness testing to try to address this. It’s an approach that will have you gagging for air, begging for mercy, and asking for forgiveness, too. Crucially though, it’s one that should deliver a more comprehensive rider profile.

The first thing I did on Sufferfest was this test, and you betcha, it hurts like hell. It’s longer, and obviously tougher than just a single 20-minute power test. But its results, actually made me feel quite good about myself, which is a rare thing when it comes to fitness tests, here’s why:

FTP tests aren’t very useful if your main strength is your anaerobic capacity. Like a sprinter. Most sprinters have muscle composed of fast twitch fibers. This physiology is great for producing explosive power, but it doesn’t lend itself to long hard efforts. For these types of riders, basing training zones on their FTP will lead them to not work hard enough on their sprint, and in some cases, over train their endurance.

As it turns out, Sufferfest profiled me as an out-and-out sprinter. According to the test, I have “exceptional” (not my words) five second power, very good one minute power, and everything else is mediocre at best. This is the first fitness test I’ve ever done where I’ve not been totally embarrassed with the outcome.

It makes me feel less ashamed about all the times I’ve been left behind on long climbs because “I’m not a climber.” But instead it demonstrates that I have some strengths worth working on, and that I should probably be taking a different approach to training than basing everything on FTP.

A sprinter is unlikely to improve themselves, especially their sprint, if they only try to build their FTP. As I mentioned, most training zones set the “sprint power” zone at 150 percent of FTP or higher. So, for a rider whose FTP is 225 watts, sprint training should be conducted at least 330 watts.

Let’s consider my figures, my 20-minute power is somewhere around 225 watts (considering it’s February and that I’m a sprinter, this is ok, trust me) but my peak 5-second power is north of 1,250 watts, (not bad considering I spend eight hours a day sat on my ass).

If I was to aim for a minimum of 330 – 400 watts during sprint intervals, though, I would be doing myself a massive injustice. I wouldn’t be working on my sprint, and the interval wouldn’t be long enough to train my anaerobic capacity to any discernible degree. It would do little more than just make me tired.

Training like this could even lead to a plateau, where, despite hours and hours of training, no improvements are made.

On completing a 4DP test, the rider is presented with their passport to Sufferlandria (get it?) which includes information about their rider characteristics. It also suggests training sessions based on inherent weaknesses and strengths. In other words, it tells you what you should be doing to get the most out of your training.

I’ve done three of these suggested workouts since completing the 4DP test, and I can honestly say, with my hand on my beating heart (thankfully it’s returned to a normal BPM), that the Sufferfest workouts pushed me harder than I’ve pushed myself in a long time. I feel great for it too.

For many years, I’ve battled with the fitness plateau. I would log thousands of miles every summer, but would never really get much faster. According to Sufferfest’s 4DP test, it seems I may have been training all wrong.

According to the Sufferfest, I should focus more on very short, very intense efforts, rather than long, drawn out aerobic intervals. In theory this should improve my sprint, 5 minute power, and FTP by increasing my ability to deal with those demands.

I guess this leaves me with only one option, to carry on doing as Sufferfest tells me and suffer. I’ll see you in a few months to report back, hopefully I’ll make it through.