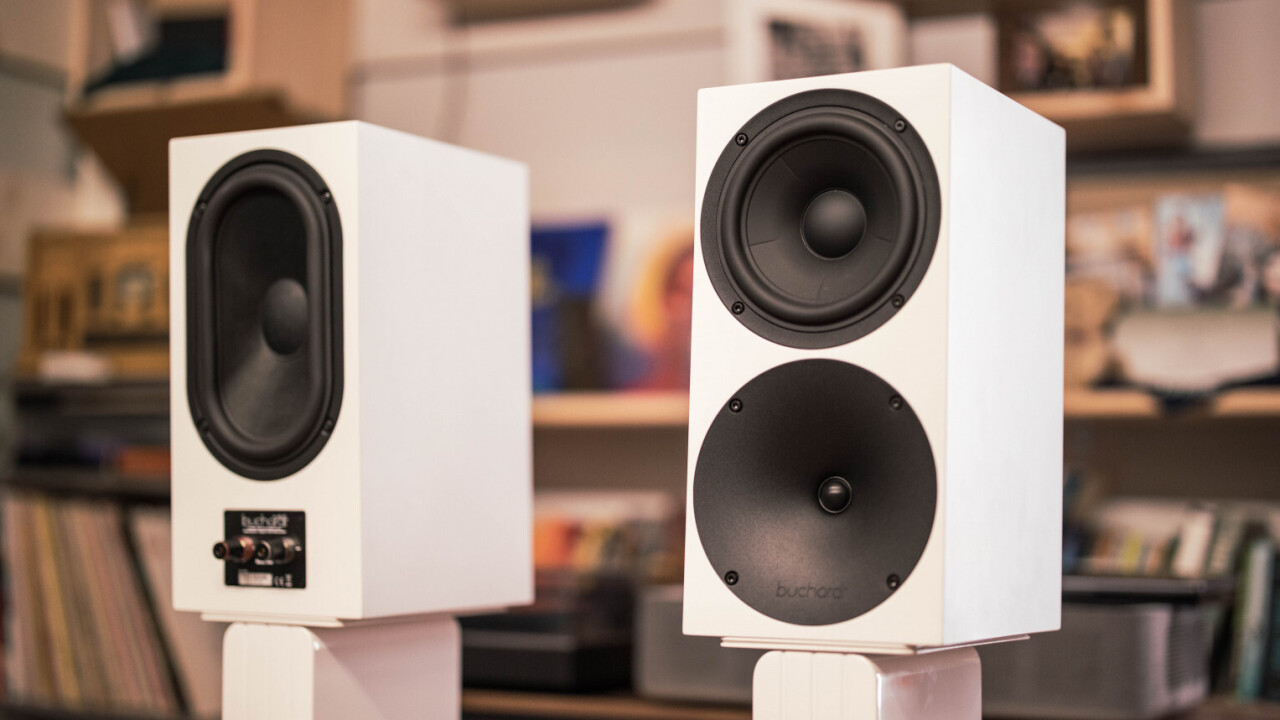 If you’re not particularly invested in high-quality speakers, there’s a good chance you haven’t heard of Buchardt Audio. I think it’s time to fix that.

A fledgling Danish audio firm with a 31-year-old founder, Buchardt has burst into the hi-fi scene with much momentum. Early buzz has lauded its products’ high performance per dollar, and I have no reason to contradict those comments.

After spending some time with the Buchardt S400, I came away impressed with both its sound quality and the measurement data behind it. At €2,000 within Europe or €1610 (~$1,800) elsewhere, the S400 is a remarkable performer that goes toe-to-toe with top options in the price range, like the KEF R3.

At a glance, the S400 is unassuming. It’s a fairly compact unit given its claimed in-room bass extension of 33 Hz with a single 6.5-inch woofer. It comes in matte white, black, and wooden boxes that are tasteful without being showy, while circular grilles optionally protect the drivers. Some might even think the speakers a little plain next to comparably priced models from KEF or Bowers and Wilkins.

Take a closer look though, and you’ll notice careful consideration to acoustics that make the S400 different than your typical box speaker.

Instead of the port(s) you’d find on most other speakers – gaping orifices in the enclosure that help low bass hit with more authority – you’ll see a more expensive passive radiator on the back. Passive radiators aren’t necessarily better than a well-designed port, but they require less space for similar bass extension, allowing the S400 to maintain its svelte dimensions.

Turning to the front, no, the speakers aren’t upside down; the S400 is designed with the tweeter below the woofer and then tilted backward a tiny amount to ensure optimal time alignment between the drivers.

But the real star of the show is the massive waveguide – the conical structure surrounding the tweeter. More than an aesthetic flourish, Buchardt says its waveguide is a meticulously modeled component meant to precisely control the way its small 19mm tweeter radiates sound, helping the speaker both achieve a flat frequency response and radiate sound into a room in a highly controlled manner.

All this preamble is to say that the Buchardt S400 doesn’t need exotic materials, fancy new technologies, or other marketing gimmicks to sound really good. It’s just a bit of impressive engineering.

I was struck by how much bass impact this compact speaker is able to pump out; nearly as much as the KEF R3 in a far smaller body. There’s a good sense of dynamics too; adept at providing an engaging listening experience that belies the speaker‘s size. It sounds as good at low listening levels as well as when blasting music.

Their timbre is well-balanced, without emphasis in any particular region. Highs seemed balanced ‘just right’ – with ample detail without harshness or sibilance. That said, I did feel voices were a bit more recessed than I’d like and I had to mess around with positioning to get voices just right. This is perhaps because I was coming off the mid-forward JBL L100 Classics at the time, but I tend to prefer a little more emphasis in the mids on stereo speakers to help vocals shine through the ‘phantom center.’

Not that these were any slouches in the soundstage department overall. The Buchardts have a rather expansive soundstage with even more impressive imaging, presenting a sense of depth to the sound that made it easy to separate instruments during busy tracks. While I personally tend to gravitate towards an even more expansive soundstage, that tends to come at the expense of some precision. Those who prefer a more focused image will feel right at home with the Buchardt.

My positive impressions were backed up by measured data.

As usual, I performed measurements after forming most of my listening impressions. Measurements help eliminate biases and are highly correlated to user preferences. The wonderful, oh-so-rare thing this time around is that Buchardt actually provides a full suite of measurements right on the S400’s product page.

I can’t emphasize enough how refreshing that is. It shows the company has little to hide.

Good measurements don’t guarantee you’ll like a speaker, but they significantly increase the likelihood of it. Decades of research tells us that, contrary to some audiophile superstition, an overwhelming majority of listeners prefer speakers that measure reasonably ‘flat’  when aimed at the listener, and whose sound radiates smoothly as you move off-axis. (The majority of what we hear in a typical living room setup is not the direct sound, but rather the reflections off of walls and other surfaces).

First up, we have the horizontal response out to 75 degrees and an averaged ‘listening window’ response covering a 30-degree horizontal and 10-degree vertical window. The latter accounts for the fact we don’t sit perfectly still or centered, and is probably the most important individual curve.

This is a seriously admirable performance for a speaker at any price point. Moreover, it’s encouraging to see how closely my results line up with Buchardt’s, even though theirs were captured in a proper anechoic setup and I use a 200-dollar jerry-rigged system. Buchardt’s measurements show slightly more treble energy and less of a dip around 16Khz, but they’re very similar considering the different methodologies. It’s nice to confirm the company isn’t fudging its measurements.

Clearly, that massive waveguide is doing its job, leading to some of the flattest listening window and on-axis responses I’ve measured until that dip at the top of the treble (a region many people can’t hear anyway). The only speaker I’ve measured flatter is the Neumann KH80, which uses digital signal processing to enhance the speaker‘s sound.

Moreover, the off-axis response is remarkably smooth, suggesting an excellent soundstage and even tonal balance. It also means you have some flexibility for angling the speakers. Point them straight out into your room for a more expansive soundstage, or point them right at your listening position for a more focused one. You also don’t have to be seated perfectly in the center for neutral tonality.

Bass response is also impressive for a small speaker, keeping in mind that  my anechoic response doesn’t show the major reinforcement a normal speaker would get from being close to your room’s walls. It should suffice for most acoustic music, and I found Buchardt’s claim of an in-room response down to 33Hz to be realistic. You won’t get the deepest sub-bass, but no compact passive speaker will get you that. A subwoofer is always a good idea.

The S400’s on-axis and horizontal response, at least, slightly outdoes the $2,000 KEF R3 – its direct competitor and one of my favorite speakers on the market. The S400’s measurements are also vastly superior to the $4,000 Bowers & Wilkins Formation Duo (although the Duo is a wireless speaker and has much better deeper bass thanks to DSP).  Its measurements are also nicer than the $4,000 JBL L100 Classic’s, although I found myself preferring that speaker’s wider dispersion and more mid-forward sound, which can counter an inherent midrange dip in all stereo playback.

Next is the S400’s vertical response out to 30 degrees. The vertical response is far less important than the horizontal for impressions of sound quality and soundstage, but it can still affect a speaker‘s tonal balance.

Almost every speaker with vertically aligned drivers – that is to say, the vast majority of them – shows flaws in the vertical response. The S400 is no different. Only coaxial speakers like the KEF R3 or a few exotic designs have a pristine vertical response.

That said, we can see the S400 is particularly finicky about your listening height. Even at just 5-15 degrees above or below the reference point (at the center of the speaker, right between the woofer and waveguide), the sound shows significant variations from the on-axis response.

In other words, you should take care to set up the speaker such that the reference point is at ear level – the cabinet’s 2-degree tilt helps here – especially if you listen from up close. I also would be wary about using these for nearfield listening on a desk, where flaws in the vertical response will be more audible.

But unlike many speakers, the S400 impresses in that the vertical response actually straightens out again as we move to more extreme angles.

That means these flaws should not affect the perceived tonal balance dramatically a typical living room setup. Nonetheless, I suspect the large dips in around 2KHz are why I thought voices sounded a tad recessed; this region is important for speech intelligibility.

All that being said, I have no reservations about recommending the Buchardt S400. It’s a fantastic little speaker with excellent bass extension and impact for a compact unit, impressive dynamics, a crystal clear soundstage, and mostly neutral tonality. It looks nice, feels solidly built, and is smaller than many competing systems.

For many audio enthusiasts, the S400 could be endgame material. You’d have a hard time finding a better pair of passive bookshelf speakers at its price or well above.

The S400 is available from Buchardt’s website with free shipping worldwide and a 30-day return policy (you just pay €25 for return shipping). Within Europe, it’s priced at €2,000, which includes 25 percent VAT. Outside of Europe, you can get it for €1,610, or approximately $1,800. Buchardt also sometimes sells refurbished units for a couple of hundred bucks cheaper.