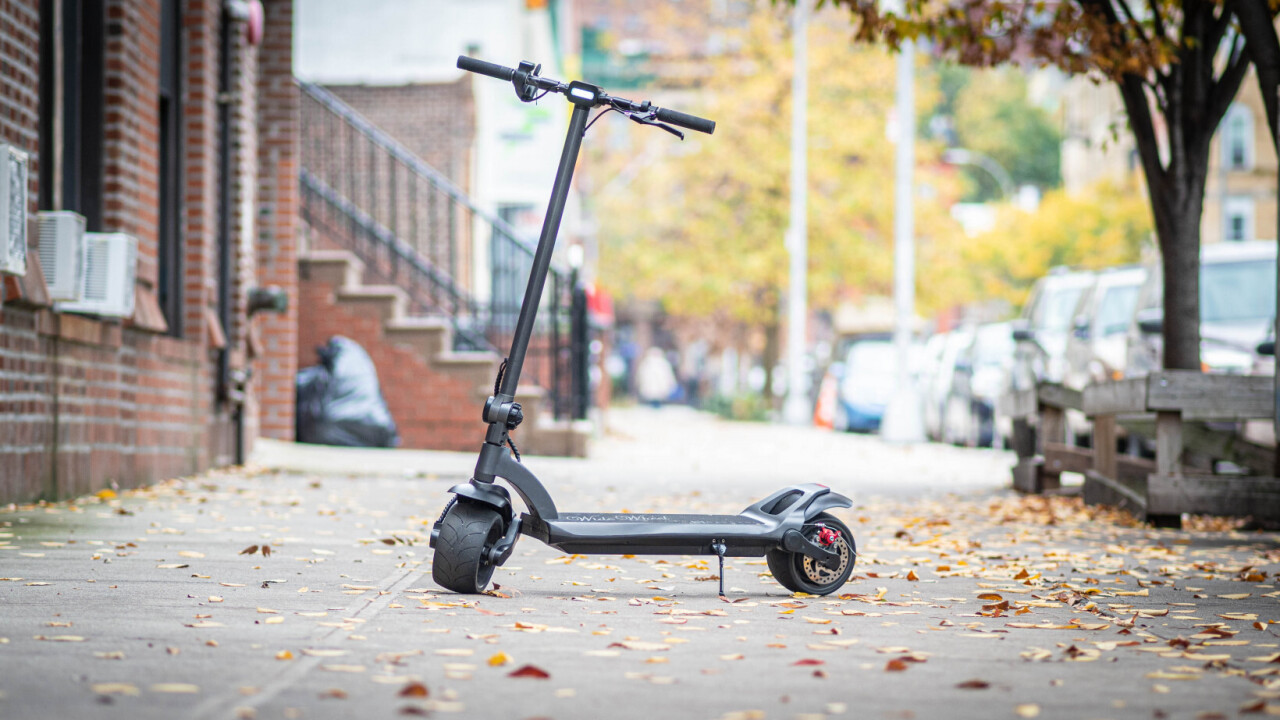 Most people associate electric scooters with the low-end models used by ride-sharing services that have inundated cities throughout the world. Then there are the extreme scooters, hulking vehicles capable of hitting over 40 miles an hour, but too big and heavy for multimodal commuting and out of most buyer’s price range.

But there’s also a middle ground in scooters like the Mercane WideWheel, distributed exclusively by FluidFreeRide in the US. Capable of hitting 25 miles per hour and 20 miles of range, the WideWheel is one of the most well-rounded scooters on the market, with few caveats. It won’t break the bank compared to similarly-powered scooters, coming in at $999 or $1,200 depending on whether you opt for the single (500W) or dual-motor (1000W) configuration, respectively. (Moreover, it’s on sale for $899 at the time of publishing).

The scooter‘s claim to fame is in its name: the extra-wide, 8×4-inch tires that make for a stable ride that feels nothing like your typical scooter ride. The experience in some ways more akin to riding a snowboard or surfboard than your typical scooter, asking you to use more of your body to make tight turns around corners, and making for an engaging ride.

The scooter is also built to a high standard. It’s good looking, for one; sleek without being as ‘techy’ as the Unagi Model One. Strangers would frequently ask me about my ride. The scooter comes in at 50lb (42lb for the single-motor model), and the metal base feels solid and the stem has minimal wobble, although there is some flex in the folding handlebars.

I’ll take it though, as the WideWheels folds small and slim enough to leave in a hallway or bring on the subway without stabbing anyone in the shin. It’s still a big scooter, mind you, at 43 inches long, but in practice is sometimes more practical to tuck away in a corner than something with fixed handlebars, like the Unagi Model One.

While the WideWheel uses airless tires for durability – you never have to worry about a flat – keep in mind the tires do transmit some vibrations from the road. On the other hand, the scooter comes with excellent suspension that is able to absorb bumps and small potholes effectively, helping me feel safer on the road. The fat tires make it a blast to ride, and though I’ve ridden faster, stabler scooters– including FluidFreeRide’s own Mantis – none feels quite as engaging as the WideWheel.

That’s not to say the WideWheel isn’t zippy though. The first thing I when I pressed the throttle was just how quickly the scooter accelerates – nearly as fast as the 40mph Mantis. Despite my being a 270lb rider, it climbs up hills like nobody’s business, and it had no problem getting up to its 25mph top speed once unlocked. That’s fast enough to keep with NYC traffic in a pinch, though I normally hovered closer to 15-18mph.

The scooter delivers on range too. FluidFreeRide claims you can go a “realistic” 20 miles on a charge with the dual-motor version; the company even has a range test video showing it achieving 18 miles at near-maximum power with an 185-pound rider.

I tend to ride slower and found myself regularly achieving 12-15 miles despite a 270lb payload in stop-and-go city traffic. And if you do run out of battery, the WideWheel makes a surprisingly decent kickscooter on flat terrain.

The scooter isn’t without its faults though. The most obvious one is in its interface. Changing settings – such as to switch between power modes or activate cruise control – is needlessly complicated.

The WideWheel’s interface consists of four LEDs and a single button to switch between modes. Unlocking the top speed involves some finger gymnastics to press the throttle, brake, and button all at once with careful timing. You get the hang of it eventually, but it’s not fun.

The LED headlamp is also disappointingly dim. It’ll help you be seen from a distance at night, but won’t help you see anything ahead of you. A separate, brighter light is absolutely necessary for night-time riding. And while the acceleration is zippy, the throttle isn’t nearly as smooth as the one on the Mantis or Unagi Model one.

But the WideWheel’s biggest flaw, as far as I’m concerned, is that it only has one brake. It’s an effective disc brake, but there’s no built-in redundancy should something go amiss, such as on other scooters that may feature electronic braking or a physical foot brake in addition to a disc brake.

This problem came to a head when FluidFreeRide and Mercane issued a recall for the WideWheel after an issue was discovered with the brake caliper a few months ago. The companies handled the issue swiftly and openly, offering free replacements and easy to follow instructions. But it would have been a significantly smaller concern if the WideWheel had some other way to brake. Aside from, you know, just putting your shoe to the asphalt. You’ll want to regularly inspect the brake to make sure everything is in order.

Despite these caveats, I can’t help but feel the WideWheel is one of the best enthusiast purchases in the electric scooter market. It’s fast, stable and relatively compact for its power. It has good range, feels well built, and comes in at a fair price. Most importantly, it’s an absolute blast to ride.

The Mercane WideWheel is available from FluidFreeRide starting at $999, but at the time of writing, the dual-motor version is on sale for $899.