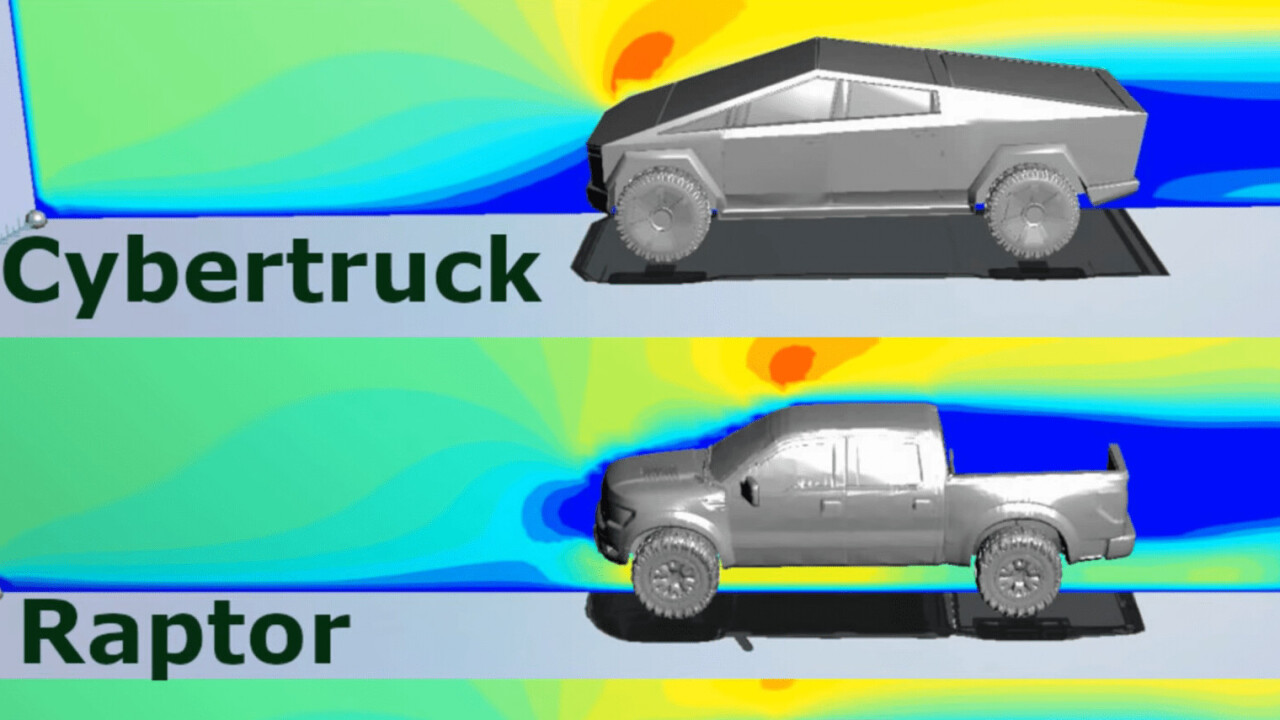 One thing that Elon Musk emphasized about the Cybertruck during its unveil is that its design is about more than just aesthetics. We already know the thick, angular steel plates makes for a stronger frame and theoretically lower build cost, but it likely has another benefit too: aerodynamics.

The faster a car goes, the more it has to fight drag – essentially the air pushing back on a moving object. In general, the lower the vehicle‘s drag coefficient, the easier it is for it to ‘cut’ through the air, and the better its mileage will be (all else being equal). While some worried the Cybertruck‘s angular design would hamper its aerodynamics, the vehicle appears to compare favorably to existing trucks.

He found that while there’s a bit of addition drag at the very peak of the vehicle, it’s an overall surprisingly efficient design. The flat front of the vehicle actually appears to work as an air splitter, smoothly redirecting airflow. The fact the truck comes with an integrated, stiff bed cover doesn’t hurt.

Well, no one else did it so I did. Here is the #CyberTruck in CFD. What intrigues me is how well this works. While it may occur to be happenstance that the aero turns out quite well, I believe this was actually the result of very clever design. Ease of manufacturing in flat panels, significant use of triangulated body parts, etc. I won't quote a drag coefficient, as I dont want to put words in anyone's mouth, but I will place money on it being much lower than most sports cars (due to down force), and nearly any (1/2 ton) truck period. Further, I believe the vortex shed over the bed walls helps act to "seal the bed" when the cover is open. I havent modeled the open bed yet, but it sure seems promising. Further, it appears the front end is designed to almost entirely blank out / shield the wheel well…. The cad file is dimensionally correct, all angles and curves are as close as possible. There are some uncertainties such as fenders and wheel well air-exhaust etc. Lastly, at 65mph the local velocity over the roof "peak" is 88mph. Is this the ultimate Elon Easter Egg? @tesla #Tesla #TeslaTruck #CFD @elon

Boats and Engines acknowledges that his software and model aren’t accurate enough to estimate the vehicle‘s drag coefficient with complete accuracy, but his results nonetheless suggest that some worries over the Cybertruck‘s flat design are unfounded.

Mind you, these differ from official stats. Dodge claims the Ram 1500 drag coefficient is as low as 0.36 on its Quad Cab 4×2 model, making it the most slippery truck on the market. While Tesla hasn’t provided an official drag value yet, Elon Musk has said that “with extreme effort, Cybertruck might hit a 0.30 drag coefficient, which would be insane for a truck.”

With extreme effort, Cybertruck might hit a 0.30 drag coefficient, which would be insane for a truck. Requires tweaking many small details. https://t.co/IMLJbsInmq

For comparison, Tesla‘s Model 3, one of the slipperiest cars out there, has a drag coefficient of just 0.23.

Of course, until the vehicle actually hits the road, this is all speculation. The Cybertruck doesn’t currently have side mirrors, for one, and it’s possible its design may need to change somewhat to meet safety standards (those angular panels don’t look great for pedestrian impacts).

It’s also worth acknowledging that efficiency is likely a bigger deal to Cybetruck owners, who have to worry about range during long trips and/or heavy hauls, while regular truck owners can always stop at the nearest gas station. Lastly, the co-efficient of drag isn’t everything, and other aspects will affect the vehicle‘s efficiency.

Still, the data so far suggests the Cybertruck‘s form follows function; it cuts through the air more easily than its boxy design might have you believe.

Cybertruck vs Ram vs Raptor Aerodynamics on Boats and Engines [YouTube]