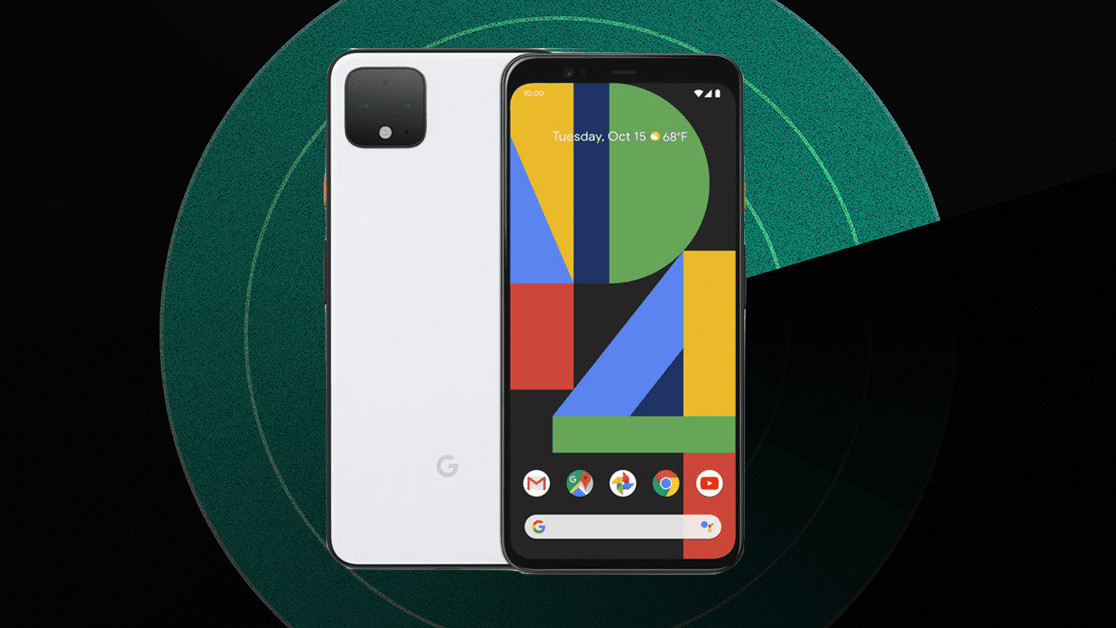 The lack of the notch is one of the big evolutions of the Pixel 4. Last year’s phones (the surprisingly named Pixel 3 range) suffered with one of the worst notches I’ve ever seen on a phone. Honestly, I hated it. When the company released the 3a and 3a XL though (Google’s entry-level Pixel phones), the notch was no longer there, and the phone was so much better to use.

Now Google has removed the notch for a simple reason: to fit a whole load of new technology in.

The bar at the top not only contains a selfie-camera, it also has a near-infrared flood emitter, a dot projector, and — excitingly — the first radar chip in a mobile phone: the Soli sensor. With this, you can use gestures (like a hand wave) to interact with the phone. For example, you can swipe your arm to answer calls, change tracks, and turn off alarms.

Because of this, the Pixel 4 and Pixel 4 XL now has a face unlocking feature that — according to the company — will be the fastest on the market and work in extreme low light conditions. If this holds up in reality, it will be awesome — as it’s one of my main bugbears with the iPhone’s unlocking system.

Another element Google announced was an easier way to manage your personal data on Google hardware. Supposedly this can be done with just a push of a button:

One assumes this is a direct reaction to Apple’s focus on privacy, as well as some recent scandals about how Google is using your data. For Pixel users worried about privacy, this should be a pretty big boon.

Anyway, let’s have a look at the Pixel 4 and Pixel 4 XL’s specs:

The Pixel 4 has a 5.7″ FHD+ flexible OLED display with a 19:9 aspect ratio. The Pixel 4 XL has the same display, but is 6.3″ instead. Using Smart Display technology, the Pixel 4 and Pixel 4 XL can run a 90Hz display, but can also adapt this depending on the environment in order to save battery life.

Both the Pixel 4 and the Pixel 4 XL have the same rear camera set-up, with 16MP and 12MP lenses on the back of the devices, and an 8MP one on the front. The selfie camera also can deliver a 90-degree field of view, meaning more people can fit in your snaps. The phones have a hybrid zoom software that delivers some pretty impressive results.

Software-wise, Google is rolling out Live HDR+. Basically, this will give an image of what the photo will actually look like on the viewfinder of the phone. Honestly, this looks like it’s going to be incredible.

To give you an idea (as these are grabbed from the live stream), this is what a phone screen normally looks like when taking a HDR shot:

And this is what it’ll look like with Live HDR+:

Basically, it should drastically improve mobile photography, as you’ll be able to actually see what you’re taking pictures of.

There are also a range of other features, including the ability to change more camera settings, improve white balancing, night sight (which has some phenomenal astronomical capabilities), and an update that makes the famous “portrait mode” look even better.

Each phone also contains a 2.84/1.78 GHz Octa-Core Qualcomm Snapdragon 855 chipset. Basically, this should deliver a top quality speed comparable to any flagship phone out there.

The Pixel 4 and Pixel 4 XL are both launched with 6GB RAM. These days, that isn’t a crazy amount, but should be more than enough to keep the phone going. The base models of the phones also come with a rather paltry 64GB of storage.

I’d always suggest going for at least 128GB (which is the other storage option you have), but the Pixel might be one of the few phones where this doesn’t matter that much, as Google will store all your photos and videos in the cloud for free.

One difference between the devices is that the Pixel 4 XL has the larger battery, with a 3,700mAh capacity, compared to 2,800mAh on the regular Pixel 4.

You have the pretty standard “Clearly White” (it’s white) and the “Just Black” (it’s black) colors, but there’s also a jazzy surprise in there too: “Oh So Orange” (spoiler, it’s orange).

I… don’t really like this. But hey, everyone’s different!

We’ll be back soon with hands-on articles and reviews of the Pixel 4 and Pixel 4 XL, so make sure you keep an eye trained on Plugged!