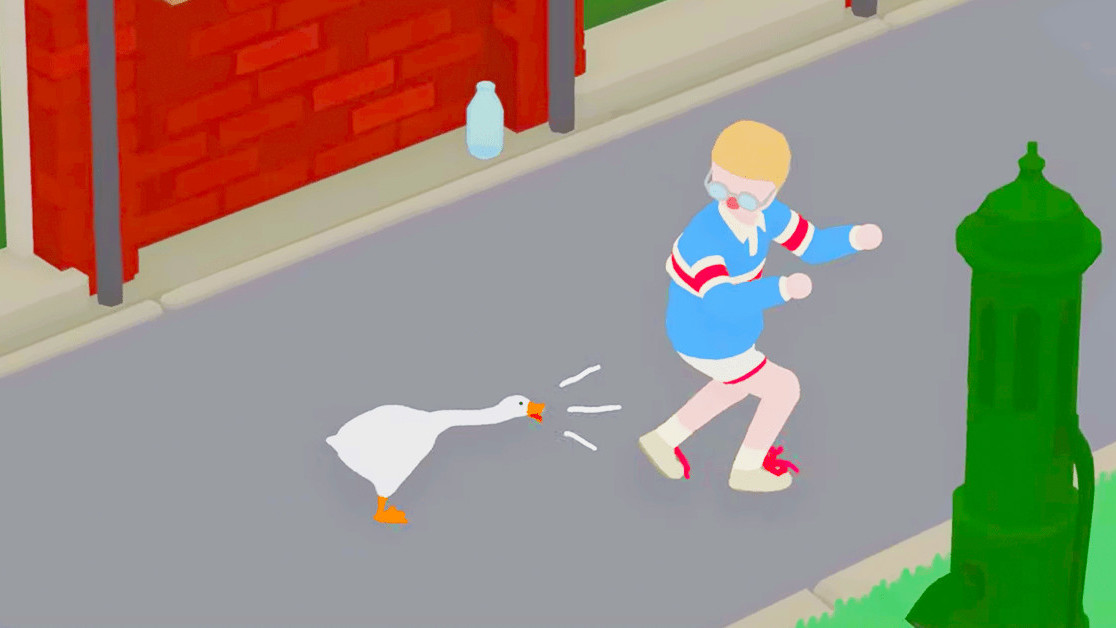 For better or worse, being an asshole is fun. Unfortunately, in the real world this has knock-on effects, like, you know, everyone thinking you’re an asshole. That’s why it’s refreshing to act like a dickhead virtually and actually get rewarded for it. And, friends, therein lies the joy of Untitled Goose Game.

If you’re unfamiliar with this title, it caused an internet storm back in 2017 with its first trailer:

In it, a goose terrorizes a gardener, stealing his keys, hat, and just being a general nuisance. The trailer looked beautiful, funny, and imaginative — everything you could want from an indie game.

Thing is, I’ve been burnt before. One only needs to think of the gap between No Man’s Sky’s promise and its first release to see how easily hype can ruin a title. But, miraculously, Untitled Goose Game lives up to the expectation. It’s everything I could ever want from a game with a goose as a protagonist.

The concept of Untitled Goose Game is simple. You play as a goose (who can honk, pick things up, run, swim, and waggle its wings) who has a list of nefarious tasks to achieve. This includes things like getting a gardener wet, making an appearance on TV, and stealing a fancy red bow by imitating a fake goose. Mmm, it feels good to be an asshole.

Play-wise, Untitled Goose Game is somewhere between a puzzle game, and a goose simulator. Many of the tasks require you to do a combination of honking and stealing, but there are no time limits or races against the clock; you do everything at your own pace.

There are a few minor issues though. One is the occasional bugginess. For example, when I first played the game, the gardener wasn’t there at all. As the majority of your tasks in this opening level revolved around messing with him, this meant I spent 15 minutes running around getting frustrated. Eventually, I reset the level, and all was well. Still, this isn’t a huge issue, as I’m certain future updates will fix these problems.

The other possible issue is value for money. Untitled Goose Game costs about $15, but can be completed in a few hours. If you’re used to games that deliver hundreds of hours of playtime for $50, Untitled Goose Game might feel like it’s lacking depth. Personally, I find incredibly long games frustrating, and the succinct nature of Untitled Goose Game is actually a bonus — but I know plenty of people who’d think otherwise.

Basically, Untitled Goose Game is unlike any game I’ve played. It’s funny, heart-warming, and polished — something that seems like even more of an incredible achievement considering the hype around its release. Plus, I get to act like an asshole and not suffer for it. What more could you want?

You can grab Untitled Goose Game on Steam and the Nintendo Switch. You won’t regret it.