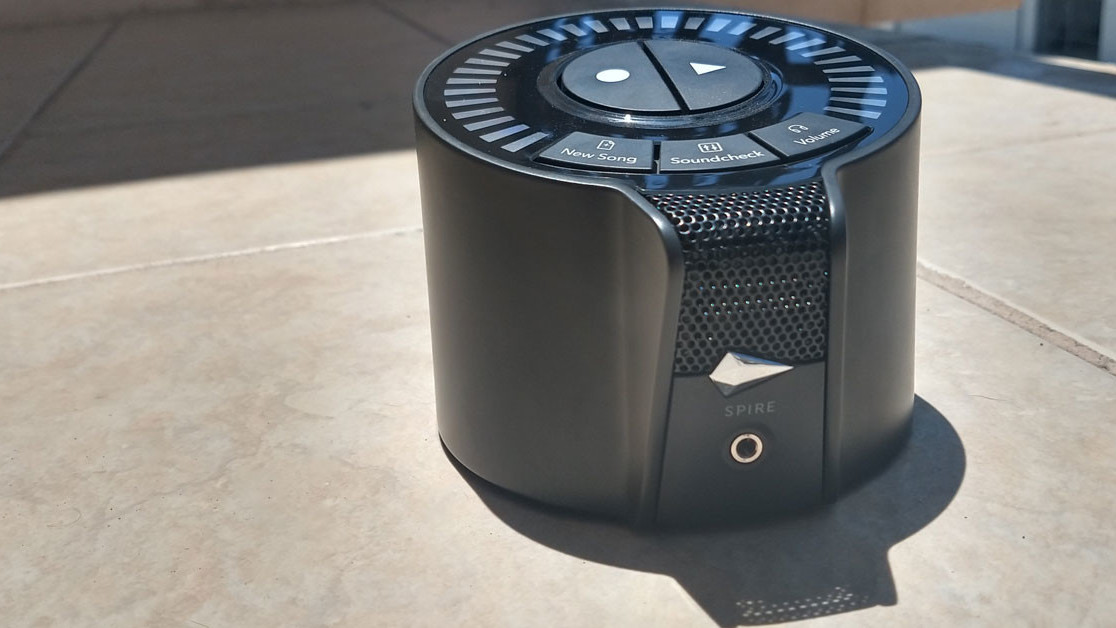 Izotope’s Spire Studio is a portable 8-track all-in-one recording studio. It’s brimming with features and powered by incredibly smart software. It may be the most innovative tool I’ve used in my home recording studio.

I wanted to hate the Spire Studio. It’s a product that takes decades of my hard-learned experience and distills it into a demure cylinder-shaped gadget capable of replacing me in my own home recording studio. But, if I’m being honest, I’m completely impressed with it.

It’s been years since I used a digital multi-track recorder machine. These days I’ve got everything running straight to PC through a USB interface. I’m somewhere between hobbyist and enthusiast – and leagues away from being a pro engineer – but I’ve been fiddling with music tech for decades. On first glance the Spire Studio would be a hard pass from me. Why would I want an 8-track when I can record as many tracks as I want in a digital audio workstation?

The answer’s pretty simple: it’s the closest thing you can get to having an assistant engineer in the studio without actually hiring one or spending thousands on expert-level software solutions.

You can go from unboxing the Spire Studio to laying down, mixing, and exporting individual tracks within about 15 minutes. It requires an iOS or Android device for use – you’ll need your phone or tablet to mix or export your projects – but you can record tracks using just the buttons on the Spire Studio if you prefer that to operating it via the app.

It has a built-in omni-directional microphone that’s capable enough for brainstorming or demoing your song ideas. But it also has two microphone/instrument inputs with phantom power and a pair of monitor-out ports for headphones. The only thing holding this thing back from recording studio-quality tracks is the right microphone. I tested it with a Sennheiser MK4 mic and got some excellent recordings.

It sets up compression and gain for you before you record with a one-button soundcheck. Once you’re ready to record you press the record button. Once you’ve laid down a track, it automatically arms the next one. Selecting recording effects is just as easy as applying an Instagram filter, you simply adjust a slider to get the sound you want and confirm.

When you’re ready to mix, you can either do so by dragging icons around on your phone or tablet to create a virtual soundstage – which is weird, but oddly intuitive – or you can just let the software handle it.

Finally, I’ve never met a device that made it easier to export your work. You can share your mixes, tracks, or projects over instant message, email, or even AirDrop. It’s fast and easy. In fact, everything about the Spire Studio’s hardware and app is drop-dead simple. It’s designed to empower someone with absolutely no clue what they’re doing to make decent music tracks unaided. In that aspect, it’s a home run.

If you’re a musician who doesn’t know a lot about recording or engineering, the Spire Studio can help take your jam session recordings to the next level. With a bit of practice and some modest gear, even a total novice could make tracks worth passing around on social media or uploading to your SoundCloud.

As someone who has a bit of studio experience, I worried that this was a shortcut tool that’d get people in the door but rob them of the experience and skills they’d need to go from creating demos for their friends on social media to putting out radio-worthy tracks.

But I found my skepticism chipped away with every recording. I came to trust the Spire Studio’s soundcheck and mixing pretty quickly. The one caveat here being that the built-in mic simply isn’t good enough for me when it comes to full vocal and instrument tracks. But it’s worth mentioning that the Spire Studio does make a pretty sweet little sampler.

I can see it being used to capture foley sounds for video soundtracks or to sample sounds for music production. I used it to capture my toddler yelling about the ABCs over and over to create an 8-layer cacophony track that sounds like a bunch of little kids playing in a classroom.

The bottom line here is that Izotope makes extraordinary software solutions for expert-level studio engineers and the company’s used that know-how to incredible effect with the Spire Studio. This isn’t a toy – at nearly $350, the price reflects that. It’s a quality, solid piece of gear with everything you need to make some serious music, a brilliant app powered by awe-inspiring software, and the potential to change how musicians create.

This is the one gadget I’d bring with me to record a group of my friends singing and jamming on acoustic guitars at the beach, or to possibly get a decent recording of my kid’s band concerts without being intrusive in any way. It’s also perfect for musical brainstorming sessions or laying down tracks as quickly as possible when you’re having a lightning bolt moment of inspiration.