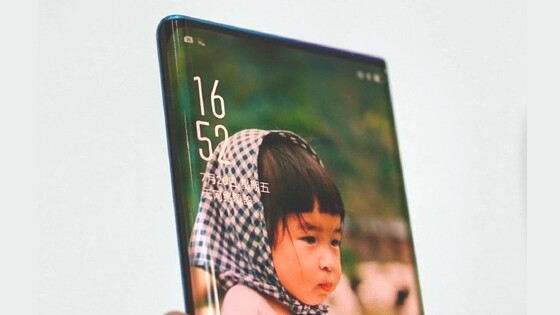 Companies like Samsung and Huawei have been serving up devices with curved edges for a while now, but Oppo’s demo takes this concept to another level by extending the visible area. Naturally, because of these overflowing bezels, there’s no room for hardware buttons on the sides. The Chinese company will have to think of other ways to accommodate power and volume controls.

Oppo‘s VP, Brian Shen, compared the phone with the company’s previous Find X from 2018 on the Chinese social media site, Weibo. Oppo‘s said that the technology will feature in one of its upcoming phones.

While the waterfall screen looks cool, Oppo will have figure out ways to prevent accidental taps and swipes, which seem inevitable given the nearly wraparound screen.

As per the reliable leaker, IceUniverse, Vivo upcoming NEX 3 device might also use a similar design.

The vivo NEX 3 is probably the highest screen-to-body ratio phone in 2019. The Screen-to-body Ratio is over 100% based on the “display area/projected area” calculation method. pic.twitter.com/B0cZ2XgzE7

At this point, it’s hard to say whether there’s any sense in such displays. They might seem more ‘immersive,’ but content that shows up on the sides will be hard to see and interact with. This might just be a passing fad – but I’m happy to be proven wrong.