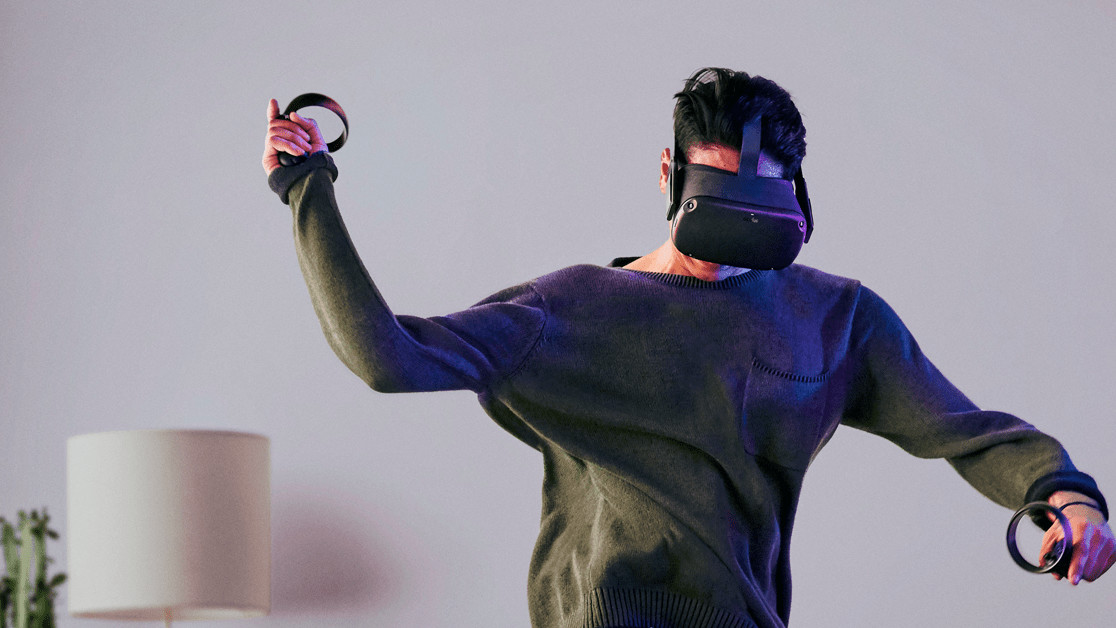 Wanna feel old? It’s been seven years since Doom-creator John Carmack first unveiled his ski-goggles contraption that would eventually become the Oculus Rift. A lot has happened in the years that have since passed, including Oculus’ 2 billion dollar acquisition by Facebook. What was then only a finicky but promising prototype, is now a multi-billion dollar industry.

However, virtual reality still isn’t very accessible or mainstream. Sure you can get a PlayStation VR headset for like 250 bucks, but that still needs to be hooked up to a PlayStation 4. Other solutions are even more expensive and require beefy computers, or are glorified phone cases that allow you to strap your phone to your head, which is obviously far from ideal.

Enter Oculus Quest, a headset that is completely self-contained, affordable and hassle-free. It’s completely wireless, doesn’t require any additional devices (besides your phone) and it’s capable of decent-enough graphics. It even has a decent built-in speaker, though you can plug in your 3.5mm headphones to either side of the Quest. The Quest comes with two Oculus Touch controllers and a long USB-C charger (don’t charge while playing, please), which is all you need to get going.

Specs-wise, the Oculus Quest has the innards of a decent modern smartphone. The full list is as follows:

One thing you won’t find on that spec list, are the two cameras mounted on each side of the Oculus Quest. These sensors track your controllers’ positions from the inside out, as well as the position and rotation of your head. This setup works surprisingly well for the Touch controllers (it gets confused when your hands get too close to your head, but that’s not a real problem) and it enables ‘six degrees of freedom’ tracking. Cheaper headsets like the Oculus Go and Google Daydream only track your movement along three axis (roll, pitch and yaw), while the Quest’s inside-out tracking system allows you more freedom of movement. This GIF is a good explanation as to why that matters.

The setup process is incredibly intuitive and simple. After pairing the headset with your phone, and connecting it to your wifi, you ‘draw’ your playable area on the floor (which you can see thanks to the four outwards-facing cameras) and off you go. No need for external sensors, cameras or calibration; it all just works from inside the headset.

It’s hard to overstate how big of an improvement the Quest is over competing headsets when it comes to ease-of-use. Sure, PC-based VR glasses still have the edge when it comes to graphical prowess, but what the Quest lacks in horsepower, it makes up in usability. Being able to simply pick up the headset and wander around in virtual reality for a couple of hours feels incredibly futuristic.

The Oculus Quest has only been out for less than a month, but it already has plenty of different experiences to play. Ranging from the simple but addictive rhythm game Beat Saber, to the more elaborate, episodic Star Wars title Vader Immortal, and from a cutesy platformer like Moss to free apps for Netflix and YouTube. Some games were a bit too pricey for my liking, Robo Recall is not worth €29.99 and €19.99 for Tilt Brush seems a bit steep, too, but that’s compensated by Vader Immortal only costing a tenner and Rec Room being available for free.

Some VR experiences like Robo Recall are obviously downgraded from their PC-based counterparts, but others like the free Oculus First Contact demo look more impressive. Every title I’ve tried (I got full access to the entire Oculus Store) ran without a hitch, which is incredibly important if you don’t want to get nauseous. Laggy performance becomes uncomfortable fast, but with the Quest I never felt like I needed to put the headset down because I needed to throw up.

The headset seems to be selling well so the library will undoubtedly expand quickly. Oculus demoed some promising titles at this year’s E3, with a weird stealth kayak game, generically titled Phantom: Covert Ops as the standout hit.

If you want to get started with virtual reality, the Oculus Quest is the obvious choice right now. It straddles the line between super expensive PC-based solutions and the cheap glorified phone holders perfectly. Calling the Quest ‘entry-level’ would be selling it short. Graphically, PC-based headsets like the HTC Vive and the Oculus Rift still have the edge, but the difference isn’t that big, and what the Quest lacks in power it compensates with its ease-of-use.

The Quest comes in two versions: 64GB and 128GB. The former has a €449.99 price tag, the 128GB version costs €549.99. There’s no way to expand the internal storage, so going with the 128GB variant is probably smarter in the long term, but I downloaded damn near every item in the Oculus Store and still had 64GB of free space, so you’ll be fine with either model for now.

The Oculus Quest is a huge leap for the widespread adoption of VR. Having everything built into the headset, and being completely wireless, is a huge improvement over other headsets and it’s exactly what VR needs to break into the mainstream. As with any launch the software offering could be bigger, but that’s a problem that will probably fix itself. I, for one, can’t wait to dive back in.