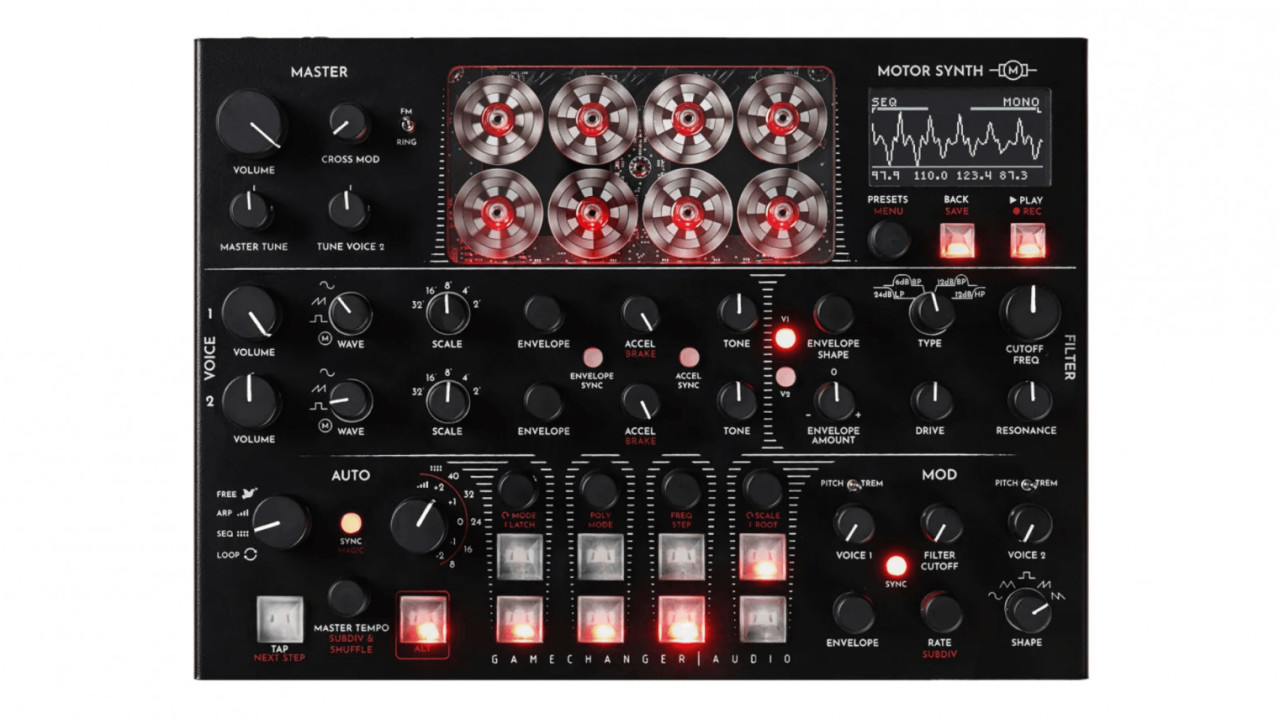 In a time where most musical advancements seem to come in the form of software tricks, it’s refreshing to see a product with a new kind of analog hardware. That’s what Gamechanger Audio delivers with its new Motor Synth, an analog electro-mechanical synthesizer that uses drone motors as oscillators to create unique sounds with a gritty, industrial texture.

Where most modern synths are basically computers digitally modeling waveform, Gamechanger’s synth uses pickups to react to the changing magnetic field of its eight spinning motors. This is where the drone tech comes in; since the sounds are created by the spinning motors, the synth needs to be able to precisely control their speed. And though the motors are controlled digitally, it’s the fact that pickups are reacting to a physical behavior that imparts the synth with its unique sound.

Analog components in the sound chain naturally impart harmonics and imperfections that often sound pleasant and would need to be artificially programmed into a digital synth; it kind of like the difference between CD and vinyl, or solid-state and tube amps.

Some artists feel these imperfections help analog synths feel more like a “real” instrument, and considering nothing else quite works like the Motor Synth, it’s fair to say it sounds unlike quite anything else out there. You can already imagine some of the ways the motors affect the sound, adding a gritty, car-engine like quality to its tones. The motors also need to rev up and down as you make adjustments, further influencing its unique tonality.

In the meantime, you can get an idea of some of what the Motor Synth is capable of with the videos on Gamechanger’s YouTube channel:

Speaking with Gamechanger’s Ilya Krumins, it seems the company’s hope is that the combination of unique analog oscillators, portability, and build quality will inspire artists to create totally new sounds. The company could have just come out with another digital synth with, but Krumins suggests the company’s name is reflective of its design philosophy.

The company has only released three products since its founding in 2015; it wants to make sure to provide something genuinely unique for music creators with each release. It won’t be a sound for everyone, but I expect the simple fact that its different will attract a number of buyers.

Otherwise, it does a lot of what you’d expect from a synth. It supports four-note polyphony with two voices per note. It includes and including analog envelopes and filters, arpeggios, sequencing, LFOs, etc, and allows you to layer loops of rhythm and melodies. You can play it using the built-in keys and knobs or connect it to your MIDI controller. Alternatively, connect a mono input and the device can track pitches and act as a harmonizer.

A screen on the top right shows your waveform, and as you get your funky tunes going, you can see how the spinning discs atop the motors react to your changes. Bonus: at an 11 x 8 footprint, it’s relatively compact for an analog synth with this many features.

The Motor Synth is currently up for pre-order via an already-funded crowdfunding project on Indiegogo. It’ll set you back $899, and will begin to ship around late November.