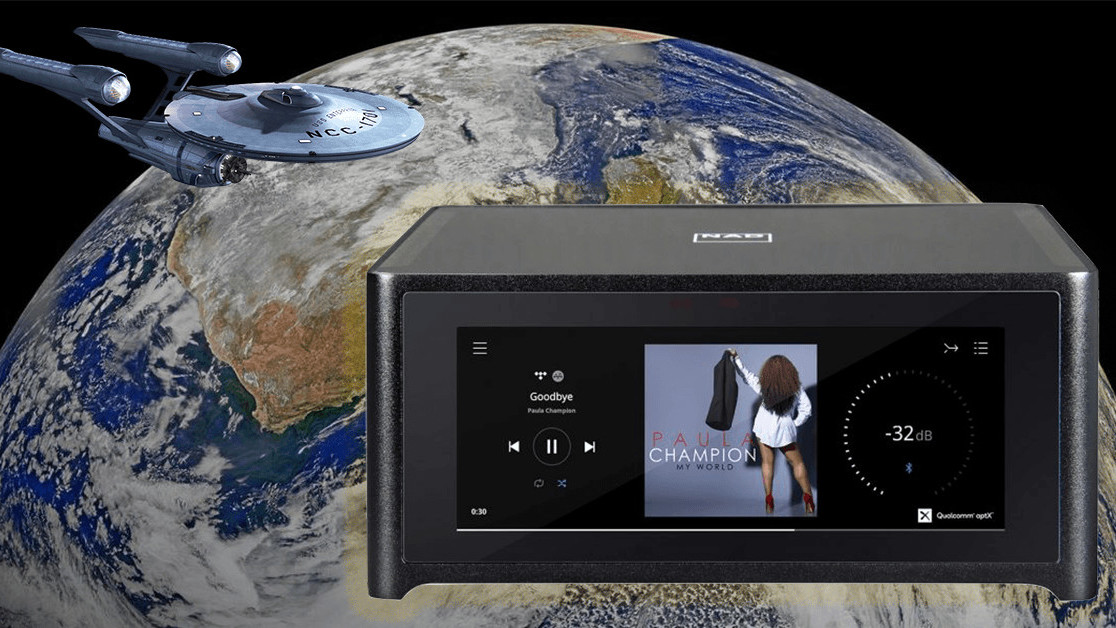 Unless you’re obsessed, keeping up to date with audiophile hi-fi equipment is tough. There’s a never ending supply of generically-named companies combining some random letters and numbers, slapping them on a black cuboid, and then selling it for thousands of dollars. It’s rare I see something I think will make an impact outside of the audiophile space, but the NAD M10 integrated amplifier has a chance to break the mould.

First off, yes, it’s a generically named company releasing a product whose name is a mix of a random letters and numbers. But the NAD M10 (lol) is different. It wants to drag amplifiers into the future. I spent an hour playing with it in London and came away very impressed.

Before we go on though, a note. I’ll put the amplifier’s specs at the base of the piece, so if you’re interested in pure numbers, you can find them down there.

Got it! So what makes the NAD M10 special?

Basically, it’s a streaming-first device with a touchscreen where, on a normal amplifier, you’d find dials and knobs and buttons. It’s designed to not only deliver the same sort of performance as an old-fashioned amplifier, but also work seamlessly with modern methods of music listening.

It’s also tiny (about half the size of a normal amp) and beautiful:

The controls on the touch screen seemed slick and responsive when I used it, but having to get up and walk across a room to control your amplifier would be horrendous. Instead, you can use the BluOS app, which is the software the amp runs.

This control app allows you to select input sources (of which the NAD M10 has quite a few) and play music from streaming services or NAS drives. During my use, BluOS worked fine, but I never entirely trust apps to do basic things like change the volume or change input – it always seems a fiddly and unreliable way of undertaking a basic task.

Luckily, the NAD M10 also has IR functionality. Although it doesn’t come with remote, I was shown you can connect a third-party device to the amplifier and use that to control basic functions. In my mind, this is a must.

To sum it up, the NAD M10 takes a digital approach to amplifiers. It doesn’t feel like an add-on, rather something that sits at the device’s core. Using it not only feels slick, but, well, kinda like the future.

So what about the sound?

A few caveats here. My slot was only an hour, the tracks I played were all on the HD steaming service Tidal, and the NAD M10 was being used in conjunction with a pair of Avant Garde Uno XD speakers (which cost more than $35,000). For a proper review, I’d have to use the amplifier in my own home with equipment I’m more familiar with.

But, in the controlled set-up, the M10 delivered an entertaining, balanced, and versatile sound that I’m a big dan of

At high volumes, lesser amplifiers tend to muddy the jazz-influenced drum work on Mastodon’s ‘Iron Tusk,’ but with the M10 the mind-bending percussion was clear and spacious. Goddamn it sounded good.

Animal Collective’s ‘Brother Sport,’ has a cacophonous and disorientating middle section where it feels like the song’s collapsing. Listening to it with the M10 I heard details I’d previously missed and, despite a little distortion, the amplifier stopped the track from falling into pure white noise.

Another of the M10’s strength is its accurate timing. On Moses Boyd’s nu-jazz track ‘Rye Lane Shuffle,’ the instruments sounded detailed, sitting together in a way that made me feel as though I was in the room during recording. There was a deft realness to the way the M10 deals with songs.

During my time listening, I went through a lot of different genres with the M10 and found it handled them expertly. The bass was balanced, the high-ends sparkled, and the separation was clear. The only downside was that there was a lack of bite on some tracks, making songs exciting, rather than exhilarating. Generally though, I found the M10 to be a brilliantly versatile amplifier.

Well, I previously mentioned my concerns about controlling an audio system using mainly a handheld device like a phone. While this is fine for selecting and playing music, I can see basic things like adjusting the volume or changing input getting annoying. The option of adding a remote is great, but it would be nice to have one included.

My only other concern is how the interface on the NAD M10 ages. People tend to own an amplifier for a long time and there’s a chance that in, say, ten years time, the NAD M10’s OS and hardware might be clunky and outdated. Still, over-the-air updates might help negate this shift.

I also quite like buttons and dials, of which the M10 has none, but I’m probably being too old fashioned and should just embrace the digital age.

At $2,499 the NAD M10 isn’t cheap, but I thoroughly enjoyed my time with it. While I can’t vouch for the amplifier completely, I did feel sad walking away from it. Hopefully I’ll get a chance to play with it again.

So, if you’re an audiophile who’s looking for something different, you should seriously consider the NAD M10, it’s truly the shape of amps to come.

(Some specs for you)

For more specs, head here. If you’d like to buy yourself an NAD M10, go here.