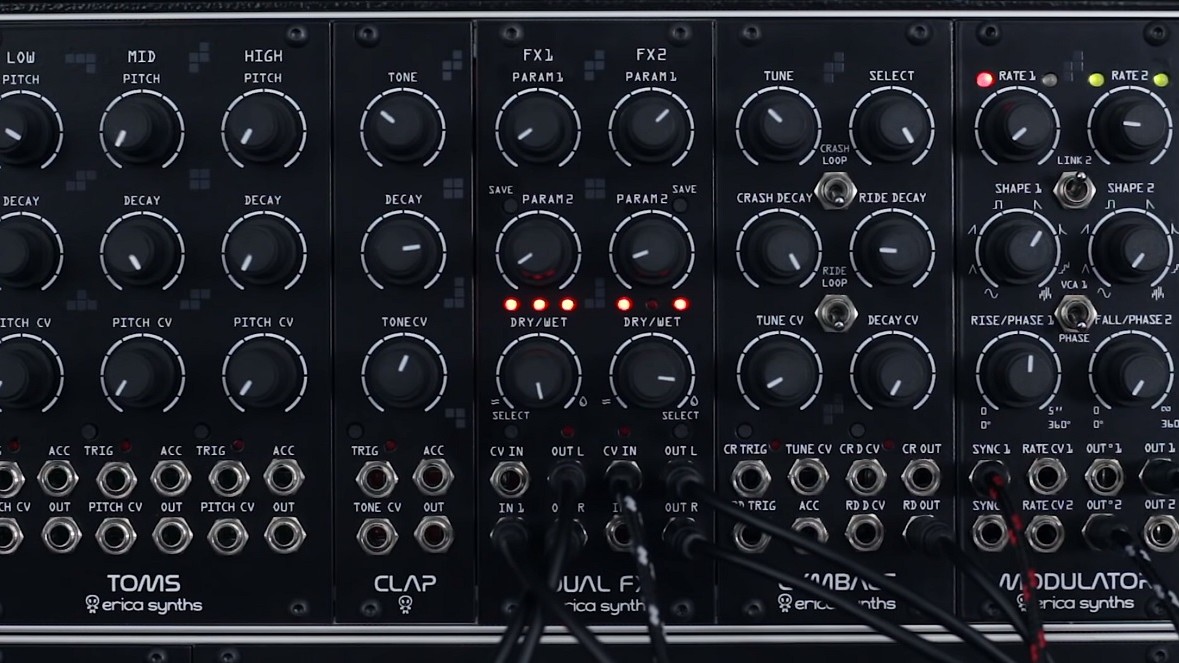 The world of analog synthesizers is a paradise for DIY-types. It doesn’t matter if you can read music: half the fun’s in creating new circuits and twisting knobs just to hear what happens. That’s why we think it might be the perfect instrument for the kind of people who, as kids, got more joy out of taking apart their toys than playing with them.

So what’s an analog hardware synth? Basically, a device that generates analog audio signals that are then modified to make sounds. Synths can recreate the sounds made by other instruments, imitate natural noises, or create something unique.

The enduring popularity of analog synths is attributable to both the hands-on nature of the DIY community, and the (often debated) idea that they have a smoother sound than their digital counterparts.

Software synthesizers are cheaper, and digital synthesizers are usually easier to use. But for those who want to create sounds from scratch using their own two hands: there’s nothing quite like analog synths. These come in hundreds of different varieties. Rather than discuss all of the synths out there, let’s narrow things down to two of the most innovative companies making them.

Perhaps no single company bears more responsibility for the persistence of the analog synthesizer as a musical icon than Moog. The list of bands who’ve used Moog synthesizers spans everyone from The Beatles to The Beastie Boys.

TNW spoke with Moog director of product management Trent Thompson and engineer Chris Howe. They said the motivation to keep exploring analog synthesizers with modern technology was simple: they care about what they do. Howe said “we try to get more people to love this thing we love.” So what do synth enthusiasts love about their gear?

Thompson said one of the reasons people play synths is because they don’t have to “follow the rules,” or make music in a traditional way. He continued:

The user has so much agency with a synthesizer to make the sound that’s in their head.

Many synth enthusiasts are driven by the pursuit of a specific sound, others simply by the desire for exploration. To this end, you don’t have to settle on one machine or another. Sure, you can just buy a synth you like and play it as an instrument, but you can also go the modular route.

Most analog synthesizer hardware is designed to work with other analog synths, such devices are referred to as modular, or individually as modules. And if you’re interested in going even further down the rabbit hole, there’s few more interesting places you could end up in the modular synth world than Eurorack analog synthesizers.

This Latvian company has a seemingly endless catalog of synthesizer modules designed to fit in a specific-sized rack called, you guessed it, a Eurorack. Several companies make gear in this specification, but none of them are quite like Erica Synths. It made headlines earlier this year when it partnered up with Gamechanger Audio to launch a synth that literally uses lightning to make music:

TNW spoke with Erica Synths‘ founder Girts Ozolins. He told us his company was created with a DIY attitude:

When my son was six or something, I wanted to build some educational electronics for him. And this is really what started it all.

Today, Erica Synths makes amazing, elegant synthesizer modules that enthusiasts can piece together to create their own unique sounds. Ozolins told us the company is always tinkering with new ideas and currently has plans to build a standalone device in the future. But for now, Erica Synths’ extensive lineup of relatively inexpensive modules is a veritable treasure trove for Eurorack enthusiasts.

There’s really no wrong place to start if you’re thinking about getting into analog synths. Sure, some of it’s pretty expensive, but there are some (relatively) inexpensive entry points. Here’s a short selection of recommendations:

One final benefit to creating music with an analog synth (or any other instrument for that matter): it’s good for your mental health. We’re not the only ones who think so either. When we asked Ozolins if he agreed, he told us:

I truly believe that if just ten percent of people in the world made music it would be a better place for everyone.

Do you live at the intersection of creativity and technology? Check out our Art of Tech track at TNW2019!