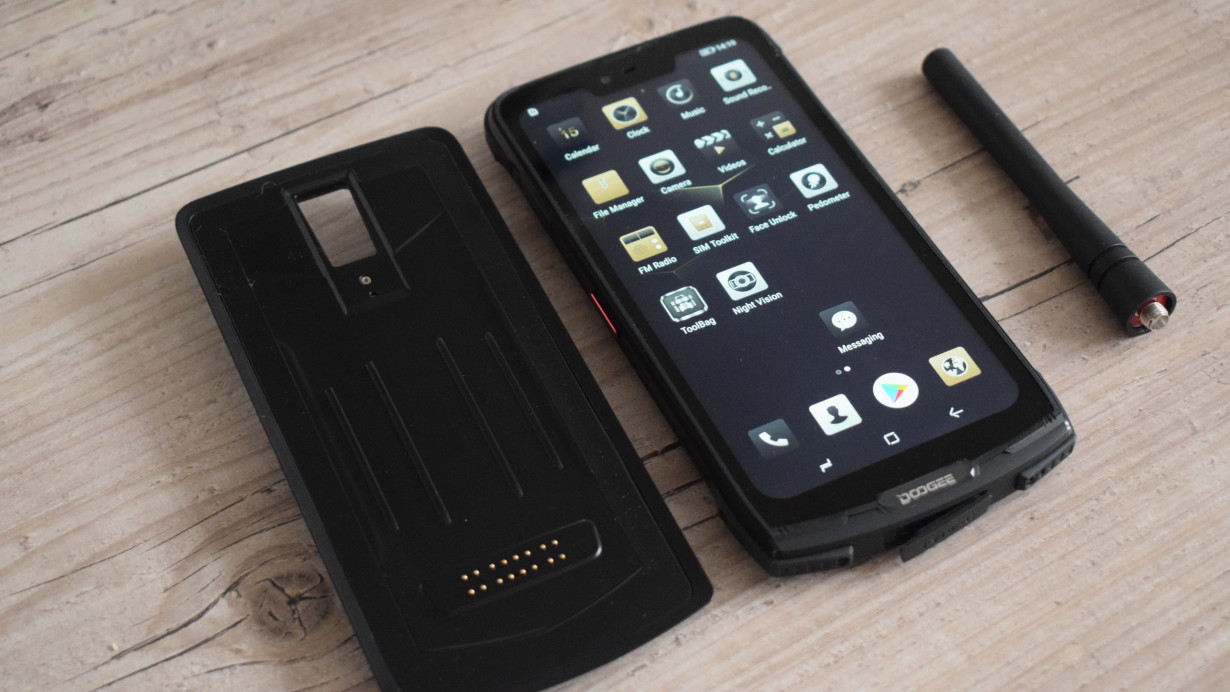 At its core, this is a ruggedized handset, similar to the ones touted by Caterpillar , as well as other Chinese phone manufacturers, like BlackView. But Doogee manages to go far beyond that, and the S90 is extensible in a way that’s hardly ever been seen since… well… the Motorola Atrix, maybe? Or perhaps the Lenovo Moto Z Series, from 2016.

Another add-on doubles the phone’s already impressive battery life by adding an extra 5,000mAh of juice, while another turns the S90 into a walkie-talkie, complete with massive breadstick antenna and everything.

There’s also a gamepad extension pack, which connects to the S90 over Bluetooth, and brings a physical analogue stick, along with actual hardware directional buttons.

We at TNW got our grubby paws on a S90 last week. And while we haven’t quite had the time to do a proper in-depth review, we’re definitely up for sharing our first impressions of what’s easily the weirdest smartphone to hit the market in some time.

Underneath its rubberized chassis, the Doogee S90 has some fairly respectable middle-of-the-road specifications.

The inclusion of a MediaTek SoC chipset isn’t a surprise, as they’ve got a propensity to show up on low-to-mid-range phones — particularly from less well-known Chinese manufacturers.

The Helio P60 is broadly equivalent to Qualcomm’s Snapdragon 660 platform. It differs in having a 12nm production process, rather than the Snapdragon’s 14nm process. While the Snapdragon is a little faster and has a better modem, the MediaTek offering has more sophisticated AI features.

The inclusion of wireless charging is a nice surprise, and isn’t typically found on devices in its price point. Similarly, it’s good to see Doogee wasn’t stingy with storage, particularly since it’s angling this phone at gamers. If you’re going to use the S90 for emulators and Fortnite, you’re going to need all the space you can get.

Aside from the modules, the unit shipped to TNW included a Doogee branded wireless charging pad, a USB-C cable, and a European wall-socket plug.

Like most ruggedized phones, the Doogee S90 isn’t much to look at, prioritizing function over form. The handset comes encased in a thick, heavy plastic, with prominent rubberized corners that protrude.

Did I mention it’s also really heavy? When you hold it in your hand, it feels decidedly weighty, and has a presence seldom see in today’s ultra-svelte smartphone market.

At the top of the screen, you’ll find a small notch. This contains the phone’s solitary front-facing camera, as well as its earpiece. As you’d expect with an ultra-rugged phone, the screen comes with some pretty meaty bezels, which makes you question why Doogee bothered including a notch in the first place.

The S90 has a somewhat prominent chin, which displays the Doogee logo. Below it is a rubber flap, which protects the phone’s USB-C port from any potential water damage.

As you’d expect from a rugged handset, the Doogee S90 is IP68 rated, which means that you could — if you so desired — submerge it in 1.5 meters of water for two weeks, and it should emerge unscathed.

The back of the phone contains the handset’s dual cameras. These are straddled by a pair of LED flashes. Phones typically come with just one flash, so that’s pretty unusual, although certainly not unheard of.

In the same area, you’ll find the phone’s physical fingerprint reader. This is extremely fast and accurate.

Further down the phone’s back, you’ll find the metal connectors that allow the device to communicate with its accessories.

Adorning the edge of the phone are a plethora of physical buttons. These include the usual suspects, like a power button and a volume rocker, but are also accompanied by a camera button, as well as one that’s programmable by the user.

The standout feature of the Doogee S90 is its modules, which allow the user to extend and replace functionality of the device simply by adding a component.

Phone manufacturers like Essential have long ruminated about this, but unbelievably, the scarcely-known Doogee has somehow managed to pull it off. So, how does it work in practice?

Here’s the good part. The modules themselves are ridiculously easy to install, and connect gracefully to the phone thanks to a simple magnetic mechanism. There’s surprisingly little faffing about. It works really well.

The downside is that the magnetic mechanism doesn’t really feel particularly secure. If thrown in a bag, there’s a real chance that the two parts might become separated. I suppose that was a deliberate design consideration, perhaps with the aim of making it easier for users to quickly replace modules on-the-fly, but it’s certainly something to consider.

Doogee provided TNW with the full whack of modules, which we’ve briefly tested in anticipation of publishing a full review. And while I’m intrigued by the concept, I have to admit that my first impression is that they add a ridiculous amount of girth to the unit themselves.

The review unit Doogee provided to TNW came with four separate add-ons. The night-vision camera is arguably the most interesting — even if I struggle to think of a scenario where I’d actually use it. However, it’s worth pointing out that this adds some significant bulk to the phone, making it a lot harder to shove in your pocket.

That’s also true of the walkie-talkie module. Not only does this effectively double the phone’s width, but it also elongates it significantly, thanks to the the inclusion of a truly gargantuan antenna.

Speaking personally, I think I’m more likely to use the battery module and the gamepad. The former is a bit chunky, yes, but not onerously so. Even with it attached, the phone still slipped comfortably into the pocket of my Levi’s.

The battery adds an extra 5,000mAh of juice. That means that, when connected, the phone has access to a total of 10,050mAh of power. That’s incredible, and with moderate use, you can reasonably expect the phone to last for the best part of a week.

As for the gamepad, this clips neatly onto the back of the S90. In addition to the analogue stick, it also comes with a directional pad, as well as a pair of trigger buttons. This connects over Bluetooth and charges via a built-in MicroUSB port.

According to Doogee, the gamepad’s built-in battery is expected to last for 15 days, assuming you limit playtime to just two hours a day. Given the fact that top-tier titles like PUBG Mobile and Fortnite are ridiculously taxing on a phone’s battery life, this sounds about right.

The Doogee S90 runs Android 8.1 Oreo. This comes skinned with Doogee’s custom UI, which is… interesting. It comes with a fairly unusual color scheme, which meshes grey, silver, and gold. It certainly bucks the recent trend for device manufacturers to exercise restraint when customizing the stock Android experience.

The phone comes pre-installed with a fair amount of bundled software, but in its defense, much of this is necessary to use the phone’s various modules. There’s an app for the aforementioned walkie talkie and night-vision features. That’s hardly surprising, considering that Android doesn’t come with these features included by default.

Mercifully, there’s not much bloatware to speak of. The only included app that feels a little bit pointless is called ToolBag, and includes things like an augmented reality spirit level, a compass, and a virtual reality magnifying glass.

The Doogee S90 is a bloody weird phone. Ruggedized phones are already a vanishingly small niche. Is there much of a market for a modular ruggedized mobile?

Apparently so. The quirky handset debuted on Kickstarter yesterday, and already has attracted over $100,000 in backer funds. That’s no small feat for an obscure manufacturer touting an unusual design.

Rugged phones are typically the preserve of those doing physical tasks while basking in the elements. Think soldiers, engineers, and construction workers. This phone, paired with the walkie-talkie and battery modules, would serve this demographic fairly well.

But I can also see the S90 attracting the attention of people who crave a phone that’s fundamentally customizable, yet aren’t really all that concerned about aesthetics. The fact that Doogee is currently working on a 5G module makes this phone an even more attractive proposition, at least in the long-term.

You can back the S90 from today. At the time of writing, the super-early bird pricing is available. Just shy of $400 gets you the phone, plus three modules: the night-vision camera, the battery pack, and the walkie-talkie gear.

If you just want the phone with none of the extra accoutrements, you can grab a handset for under $300. Doogee is also selling the modules separately via its Kickstarter page. These start at just $29 for the gamepad. The most expensive module is, as expected, the night vision camera, which goes for $59.

Of course, it’s worth mentioning that when you back a Kickstarter campaign, you’re not “buying” something per-se. Instead, you’re putting your money and faith in an idea, with the aim of eventually getting a reward. It’s worth remembering that there’s always an element of risk, and you could end up empty-handed. This is true of every crowdfunding campaign.

That said, Doogee is a well-established brand, and the product already exists. In fact, it’s sitting on my desk right this second. As Kickstarter campaigns go, there’s not much to fear from this one. But still, if you’re not willing to tolerate a bit of risk, you’re probably best waiting for when the device hits retail later this year.

In the meantime, keep an eye out for our full review in the coming weeks!