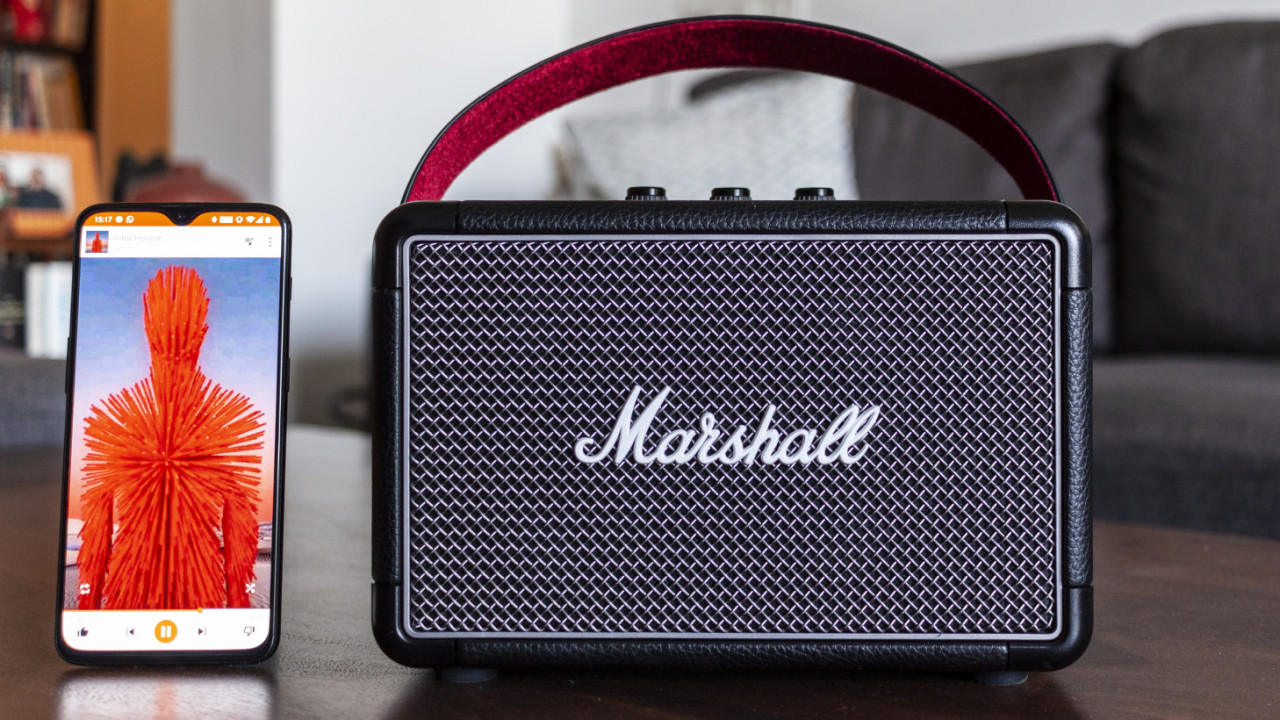 You probably know of the Marshall brand of guitar amplifiers, which have been rocking clubs and arenas since the 60s. With the help of Sweden-based firm Zound Industries, the brand expanded to launch consumer products like headphones and wireless speakers a couple of years ago; its instantly recognizable moniker and stage-ready aesthetic have helped it gain a foothold in the saturated audio gear space.

I recently received the company’s $300 Kilburn II Bluetooth stereo speaker, a chunky piece of kit that delivers satisfying sound, and is designed to travel with you – if you’ve got room in your boot, that is. It’s also a bit expensive, as far as wireless speakers go, but if you dig the whole rock-and-roll vibe, it’s certainly worth a look. Here’s what you get for your money.

The Kilburn II was released around Q3 last year, and shares design elements with Marshall’s extensive catalog of amps and cabinets. Wrapped in black faux leather, it features a metal grille on the front, and knobs at the top for controlling power, volume, bass, and treble. There’s also a nicely finished strap that makes it easy to lug around, and sturdy rubber feet let you place it anywhere without worrying about scuffing the exterior.

The speaker is rated IPX2 for water resistance, which means it’ll survive a few splashes and won’t go kaput if you leave it out during a drizzle.

It’s possibly the largest wireless speaker I’ve tested recently, measuring 243 x 162 x 140 mm (kinda similar to a car battery, if that helps), and weighing 2.5kg. At that size, it won’t fit in your backpack and is probably not ideal to fly with. But if you’re driving to a resort or going camping, this is a great speaker to get the party started outdoors.

As a guitar player and a gear nut, this is right up my alley. I love the design details that hark back to the timeless look of Marshall equipment. I also appreciate how the strap and its buttons mimic those that you’d find on an electric guitar.

This speaker connects wirelessly over Bluetooth 5.0, which means it pairs instantly with your devices once you’ve set it up. It uses Qualcomm’s AptX codec for supposedly superior wireless audio quality than the standard SBC, but you should know that the difference in output is hotly debated and you may not actually be able to tell the difference. Oh, and if you need it, there’s a 3.5mm AUX input on the rear panel.

Marshall claims that the Kilburn II juices up in 2.5 hours to deliver more than 20 hours of playtime, and I found those figures to be fairly accurate. The only bummer is that the speaker uses a mains lead to plug into a wall outlet, instead of a USB cable.

I understand this is to allow for quicker power delivery, but it also means that you’ll need to carry this cable, and won’t be able to simply use a power bank or your phone’s charger with it while on the go. Still, if you’re okay with a speaker of this size, maybe portability isn’t your greatest concern and this isn’t a deal-breaker. I’ll leave that to you to decide.

Unlike most smaller wireless speakers, the Kilburn II is a stereo speaker, and features a 20 Watt Class D amp for its woofer, and two 8 Watt amps for its tweeters. There’s also a bass reflex port on the rear; these typically allow for better response in the low end and greater output.

Testing the speaker with a variety of pop, metal, hip-hop, and jazz records, I found the Kilburn II to be a joy to listen to. It gets loud enough to fill my apartment’s living room and dining area, and there’s enough headroom for bass lines to shine through. From Jordan Rakei’s recent soul/hip-cop cuts, to Minnesota’s driving dubstep record, Voyager, to Jungle’s latest pop album and electro-rock from Birds of Tokyo, this speaker can handle it all without coloring the sound too much.

Ambient and classical tracks work well too, because the speaker allows for a good degree of separation between instruments, and you can pick out ghost notes and other aural embellishments easily. I also liked how, even with the volume cranked up all the way, the Kilburn II’s sound doesn’t distort – so it’s good to go with just about any genre you’re into.

The speaker’s top panel has knobs for adjusting bass and treble. I typically don’t mess with these, but if you do, you’ll find that they only tweak the output slightly when you go from 0 to 10.

The Kilburn II’s large battery does indeed charge up quickly, and I found it to not only last long, but also to hold its charge when not in use over a few days. I also like how it turns off automatically when you’re not playing audio through it for several minutes.

Who’s this speaker for?

I’d recommend this speaker to anyone looking for pristine audio quality around the house, or for road trips. But given how much it costs, you’ll either have to have fallen in love with the Marshall brand or the look of the Kilburn II to justify that $300 price tag.

And unlike other speakers of this size from Marshall, it doesn’t allow for music playback over Wi-Fi, and doesn’t support voice assistants. Those aren’t deal-breakers, but either feature would’ve been nice to have seeing as how the large Kilburn II will likely spend plenty of time indoors.