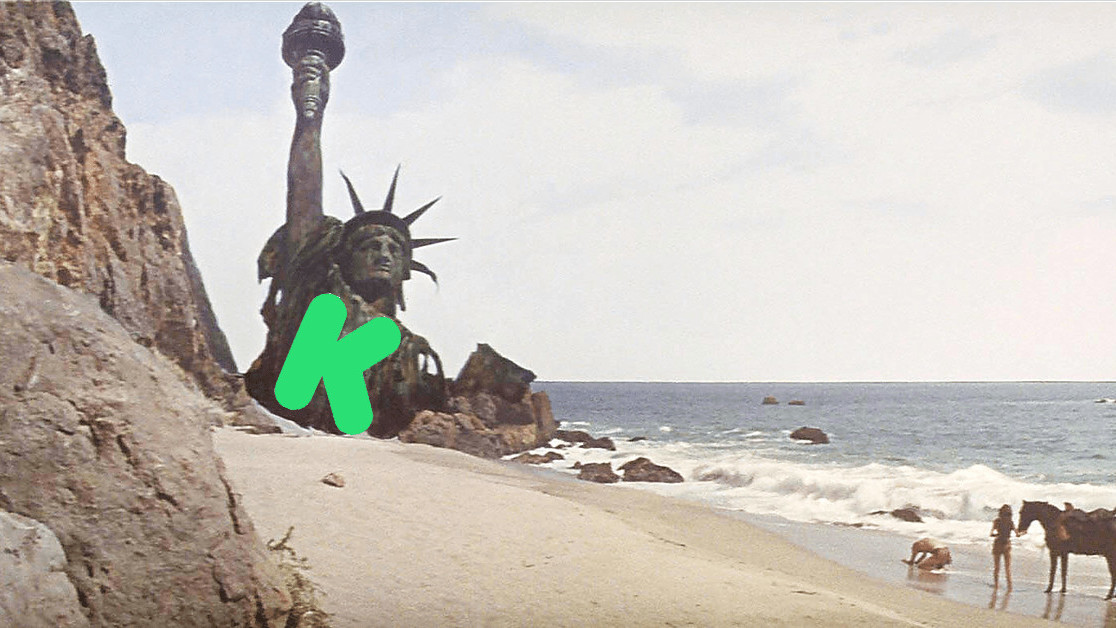 Crowdfunding is cool. Countless number of awesome things started on sites like Kickstarter, hit their funding goal, and then entered the real world.

Unfortunately, there’s a dark side to crowdfunding: projects that never get the required amount of capital and fail. This is heartbreaking enough, but what if the product was truly, deeply, and utterly necessary? What if the item being funded was vital to the future of humanity? What if it fucking and totally rocked?

Well, I’m sorry Leonardo DiCaprio-in-the-movie-Inception, not all dreams become reality and sometimes you don’t get what you want.

What we can do though is to share a selection of the greatest, most brilliant, breathtaking, wondrous, and magnificent products that never quite got funded in 2018.

I don’t own a dog. Yet. One day in the future though, I’m gonna have the most advanced hound you’ve ever seen. And it’s gonna be browsing the internet like I know dogs were meant to do.

This is one of the many, many, many reasons I’m broken up about the failure of Dogeasy. The idea behind the project was simple: to get dogs online. As in, literally to get dogs using the internet.

“But how would that work?” I hear you ask.

Oh ye of little faith. Can I ask something personal: what happened to you? What occurred in your life that made you dead inside? It’d work like this:

Clear enough for you? If you need some more info, here’s what the Kickstarter page has to say:

“Most dog owners are not aware of how great the ability of dogs to see and recognize other dogs even at high distances, what I want to prove is that this ability, if supported by computer tools, may be able to make dogs interact with computers.”

It breaks my goddamn heart that this never got funded. Still, let’s hope this isn’t the end for Dogeasy. My future mutt is going to have to earn its keep, so using the internet is a first step to making it get a job.

Ohhh fuck. Fuck fuck fuck. I needed this so bad in my life. I mean, how could you not empathise with a plight like this:

“I was tired of leaving my clothes in the washing machine. I personally wanted a simple to install device that would send me a text message when my clothes were finished.”

Tell me who amongst us has not put our clothes in the washing machine, heard the cacophonous spin cycle end, and thought “I wish someone sent me a text saying my clothes are now clean.”

The Home Wash Alert failing to meet its funding goals is the very definition of tragedy. Excuse me for one moment, I’m going to go and edit the ending of Romeo and Juliet to reflect what real pain looks like.

The Handy Dipper – a device that holds your sauce

This is getting too much for me. You know the feeling of wasted potential that washes over you when a young sportsperson suffers a career-ending injury? Like the future has had some of the light snuffed out? As though the world will never be warm again?

This is exactly how I’m feeling thinking about society being denied the gift of the Handy Dipper.

For centuries (probably), we’ve been denied the ability to dip foods into sauce without holding the container. For a short time, I believed we’d escaped this nightmare. I thought I’d live in a world where we walked around with plastic knuckle dusters that suspends sauce for us. Friends, that dream is over.

We were so close to utopia, but no one believed in the dream of the Handy Dipper. This shames not only me, not only you, but everyone.

Still, at least we have some solace from the pain: the poetry that the Kickstarter left behind.

ClimXalta can be fully summed up by the formatting of “everywhere” in this description:

I don’t know how a bold font can make me feel so dirty, but here we are. How are you feeling? You imagining the “everywhere” in the image above crawling under your skin, much like that Linkin Park song.

Anyway – back to climXalta. It sounds like poison. A spray that makes your skin “tingle” is not a Good Thing. It’s poison.

You might be wondering why I selected this as a Kickstarter we wish hadn’t failed. Easy. It’s actually pretty hard to get poisons these days.

You can thank the bleeding heart, PC, liberal brigade for that one. Back in the day, you could get some arsenic over the counter at your local pharmacy. Snowflake soy boys didn’t like that, so they stopped it. Pathetic. Sad and pathetic.

I mean, what happens if my partner or kids or dog is annoying me? Currently, all I can do is shout and scream. But if I had the climXalta? I’d just spray a bit into their coffee/cereal/water bowl and all my problems would be solved.

Actually, on further reflection, maybe it’s a good thing this didn’t get funded. NOT.

The Dirt Funnel – a dirt funnel

Any product called ‘Dirt Funnel’ already has my vote. But if that hardware can save me not only time, but also money?

Let me put it this way: the Dirt Funnel has its biggest fan. Me.

If you’re currently sitting there thinking “what on god’s green earth is a dirt funnel,” – firstly, don’t take the Lord’s name in vain you absolute heathen, have you even read the Bible?

But, just in case you were concerned, the Dirt Funnel is a funnel for dirt.

It’s a bit of plastic that holds bags open so you can funnel dirt in those bags. I, for one, am a huge dirt funneller and the thought the world has been denied the Dirt Funnel is so painful I can barely keep on typing.

If there’s one thing in this world that I despise, it’s a sweaty child. We were this close to solving that problem.

The other day, I walked into McDonald’s, ordered myself a Big Mac meal, six chicken nuggets, and a side salad. As they handed me the brown paper bag, I recoiled.

After they asked me to calm down and stop making a scene, I told them the problem: I didn’t want the meal in separate bits. I wanted it blended up into a POWER SHAKE.

“Why else would I have ordered the salad you fools,” I calmly said, standing on the counter.

Unfortunately, I’m not allowed back in that McDonalds. But there’s something even more unfortunate than that tragedy – the fact this whole heart-wrenching saga could’ve been avoided with the Portable Rechargeable Blender.

Yes, that’s its name and it’s the best name you ever heard because it tells you exactly what it is. Maybe McDonald’s should take branding lessons from the Portable Rechargeable Blender.

Just think of the health benefits of blending up every meal.

Imagine it – you’re sitting in a nice French restaurant, wishing you could have a POWER STEAK SHAKE, and, you know what, with the Portable Rechargeable Blender you could! Just jam that meat and fries into the container and mash it all into a delicious goo.

Even though it’s never actually existed, I already miss the Portable Rechargeable Blender.

The Shower Garbage Can

You know how you have different bins, right? Like loads of them. You’ve got your kitchen bin, your suitcase bin, your behind-the-fridge bin, the suitcase-under-the-bed bin, and more different types of bins than you could possibly name.

But – and this is going to weird you out – have you ever thought about why there wasn’t a shower bin? Yeah, there’s a bath bin, and a sink bin, and a mirror bin, but what about the shower bin. Weird, right?

And yet… there’s a darkness to this. The knowledge that my shower will be filled with so much detritus that it’ll eventually cascade out of the room and invade the rest of my house until it’s so rammed and there’s nowhere to sleep and I end up under a bridge.

And just to think, this could’ve been stopped if we had the Shower Garbage Can. You suck, readers, you suck.