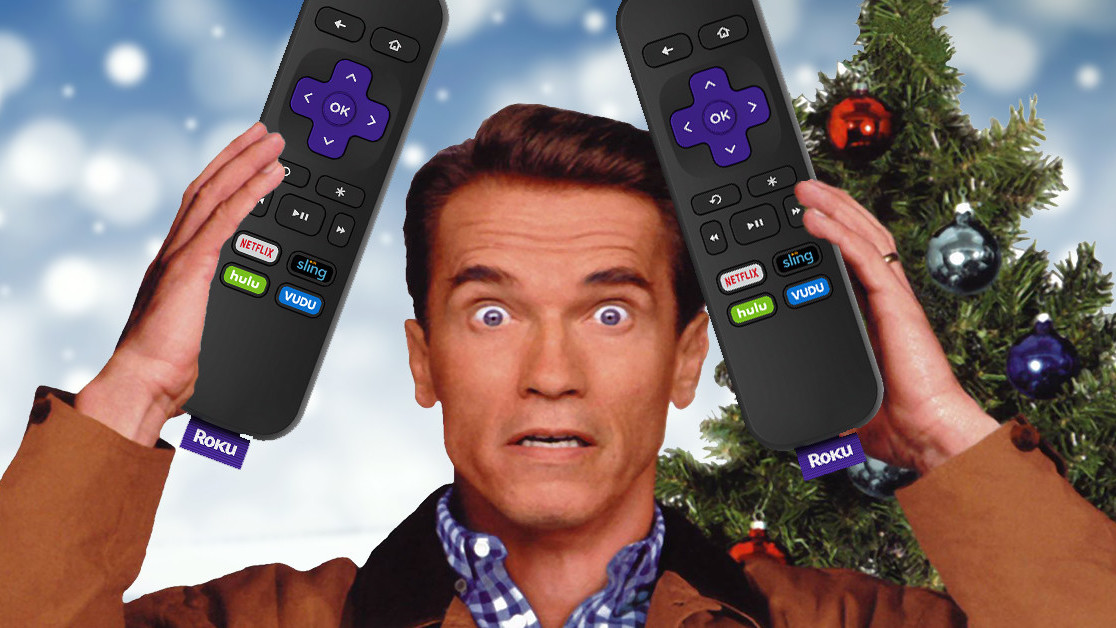 The only thing more stressful than last-minute Christmas shopping is last-minute gift guide writing. Alas, dear reader, we all have our own particular crosses to bear, but in this case, my stress can be your salvation.

On the last Friday before Christmas, I’ve sat down to compile the greatest collection of eleventh-hour gifts anyone has ever compiled. I don’t want to blow my own horn, but trust me, they’re solid.

Like Arnold Schwartzkopf (that’s his name) in Jingle All The Way, we’re here to save your bacon. From smartphones to robot vacuum cleaners, cameras to digital meat thermometers, we’ve got ideas for even the most picky of punters. So sit back, relax, as we walk you through the last frantic days of Christmas shopping.

We’ve got your back, boo.

The Christmas season is largely spent outside the house: at church, visiting friends and family, hitting the sales. While that’s all very good fun, for the hairier, four-legged members of the family, this can be a traumatic and stressful experience. And no, I’m not talking about your nan.

The Petzi Treat Cam lets you keep a watchful eye on your beloved canine companion from afar, thanks to its built-in camera and companion smartphone app. It also lets you dispense treats when your dog truly deserves it, or needs a little comfort.

The pet camera space is increasingly crowded, with dozens of rival offers. The most notable competitor to the Petzi Treat Cam is the now-ubiquitous Furbo, which we’ve reviewed (and loved).

That said, the Petzi Treat Cam stands tall on its own merits. It’s got a nice footprint and is small enough to not really get in the way. The speakers are nice and loud. Also, it looks really good. The Petzi Treat Cam sells for $165 on Amazon US.

Law enforcement tends to look very dimly on those who get behind the wheel when they’re a little bit drunk. That’s a bit weird considering that drink driving is cool (Ed: wrong) and makes you a better driver (Ed: you’re fired).

Fortunately, there are ways to check that you’re below the legal alcohol limit. One such tool is the AlcoSense Excel. This tiny little gadget is about the size of a dictaphone and lets you check your blood alcohol level from anywhere.

Before you get in the car, breathe into this device. The highly accurate tool only needs 1.2 litres of air to check if you are safe to drive. This is extremely helpful if you were drinking the night before, and don’t know if the alcohol has left your system yet.

The AlcoSense Excel comes with an LCD screen to display the results, or let you know if you need to retake the breath test. You can pick one up for £99 on Amazon UK.

Food poisoning is never fun. I once got sick off a bucket of KFC popcorn chicken, and still have nightmares of the horrific experience. I remember the shakes. Worst of all, I remember my stomach trying to purge literally everything I’d consumed that day, until all that came out was just bile.

While it’s unlikely that you’re having KFC for Christmas dinner (however if you are, allow me to extend my warmest congratulations to you for living your best life), you are still at a heightened risk of food poisoning. Why? Because properly cooking a turkey is really bloody hard.

Enter the Weber iGrill Mini. This handy little gadget is a rugged, diminutive meat thermometer which connects to your phone or tablet using Bluetooth. Once you’ve set it up, just shove it into your meat (heh). The iGrill Mini then gives you an accurate reading of the internal temperature of your meat (heh heh), allowing you to see if your food is properly cooked.

This Christmas, kick e-coli off the menu. You can grab the Weber iGrill Mini from Hayes Garden World for under £60. It’s also available on Amazon UK for roughly the same price. On Amazon US, it goes for about $40.

If plants were people, I would be some kind of Jack the Ripper character. I don’t mean to, but I have an unfortunate tendency to kill any organic material that finds its way into my house. An ex-girlfriend once bought me a terrarium that was literally designed to thrive with the minimum of attention and I still killed it.

If only I had the PlantPak Hydro-Pod. This discrete little number automatically waters your plants. You can also control how much photosynthesis it gets up to, thanks to its built-in LED grow light.

You can pick the PlantPak Hydro-Pod with LED Grow Light from Hayes Garden World for under £70, if you’re based in the UK.

It’s nearly 2019, but there’s still a place for the humble point and shoot camera. If you, for example, have a low end smartphone, odds are high that the camera sucks. Don’t get me wrong, there are some budget phones with decent snappers, but they are few and far between.

A dedicated point-and-shoot camera allows you to take better photographs than you otherwise would with your low-end phone. They come in a form factor that’s familiar to most people — especially older people. They don’t require recharging every 24 hours. For more ambitious photographers, they usually offer access to manual features, and come with larger pixel sensors than you otherwise would get on a budget handset.

I’m walking around with a Huawei Mate 20 Pro. Am I about to buy a dedicated point-and-shoot camera? Absolutely not. But does it make sense to buy one for my grandmother? Absolutely.

There are two cameras I’m going to recommend, both from Kodak. The Kodak Pixpro FZ43 is chunkier and designed with ease-of-use in mind. It takes AA batteries, has 4x optical zoom, and comes with built-in face detection.

If you want to take a step up, the Kodak Pixpro FZ53 uses a rechargable battery and can record 720p HD video.

This retails for about £85 on Amazon UK with prime shipping. On Amazon US, it’s roughly $75.

The streaming stick world is packed. Google has the Chromecast. Amazon has a swathe of affordable Fire TV sticks. And then there’s Roku.

I have a Roku Express at home and I am a little bit evangelical about it. It’s just nice and simple. The stick’s UI is intuitive and fluid. I can access a ridiculous amount of streaming services, not just the usual offenders. One example is Hopster, which my baby niece absolutely adores.

“On the fourth day of Christmas, my true love gave to me, some shameless spruiking for the Chinese phone industry.”

Christmas is a good time to renew your phone simply because in the months before, phone manufacturers have launched new products. New models are here, and old units are on sale.

I’m going to recommend four products, because I know that when it comes to phones, a one-size-fits-all approach simply doesn’t work. People are different, and their needs are fundamentally different.

The Honor 8X is the best phone I haven’t got round to reviewing yet (I suck, what can I say?). I mean it. It’s ridiculously good value, and is arguably the best phone around under the £200 price point. It looks amazing (and has a notch that’s tiny), doesn’t feel especially underpowered, and comes with Huawei’s camera AI software — Master AI.

If that doesn’t float your boat, perhaps consider this model from Alcatel — the one-time French smartphone manufacturer that is now owned by TCL, which now produces the Palm and BlackBerry phones.

I like the Alcatel V3 because it represents excellent value for a low end device. Its screen is wide and clear. On the rear you’ll find a 12 megapixel dual camera setup. It also comes with face recognition, which is a bit of a novelty on devices in its price range. That said, it works very well. And if that doesn’t set your world on fire, it also comes with a rear fingerprint scanner.

You can pick up an Alcatel V3 unlocked on Amazon UK for £129.

And then there’s the Nokia 1, which Would make an excellent smartphone for a child or an older relative. I like it because it uses Android One, ensuring that the device isn’t left behind when it comes to security updates and patches.

The Nokia 1 is the cheapest of the bunch, retailing for under £60 unlocked. On Amazon US, it goes for $59.

And hey, if none of those do anything for you, why not the revamped Nokia 3310? I’m only partially kidding. Smartphones aren’t for everyone, and the Nokia 3310 is a no-nonsense offering with a battery that will last until the heat death of the universe (don’t quote me on that).

The Netgem SoundBox HD is one of the more unusual items to land on my desk this year. Is it a soundbar? Is it a streaming device? Is it a cable box? Is it all of those things?

Yes. Yes, it is. And that’s why it’s so bloody strange.

It works though. Kudos to NetGem, they’ve have managed to cram a ridiculous amount of functionality into this one box, without it being rendered clunky or confusing. It looks good too, at least by the standards of soundbars. I mean, it even comes with Alexa integration, in addition to Freeview Play!

If you’ve splurged in getting a relative a new laptop this season, you might as well give them a decent bag to go along with it. Enter Buckle & Seam, a trendy accessories maker with a ethical bent.

Yes, their bags are well made. I’ve got one, and it looks genuinely nice. It’s managed to withstand the beating that a hectic travel schedule inevitable brings. And best of all, every bag sold helps further women’s education in Karachi, Pakistan.

Admittedly, they’re a little expensive, but you can’t put a price on style. You can see their stuff here.

Don’t give crap gifts this Christmas. Being behind the curve isn’t an excuse. Most of the things on this list are either easily available in retail stores, or via Amazon, which offers expedited shipping.

As for the few items that don’t fit in that category, I’ll just say that good things are worth waiting for.