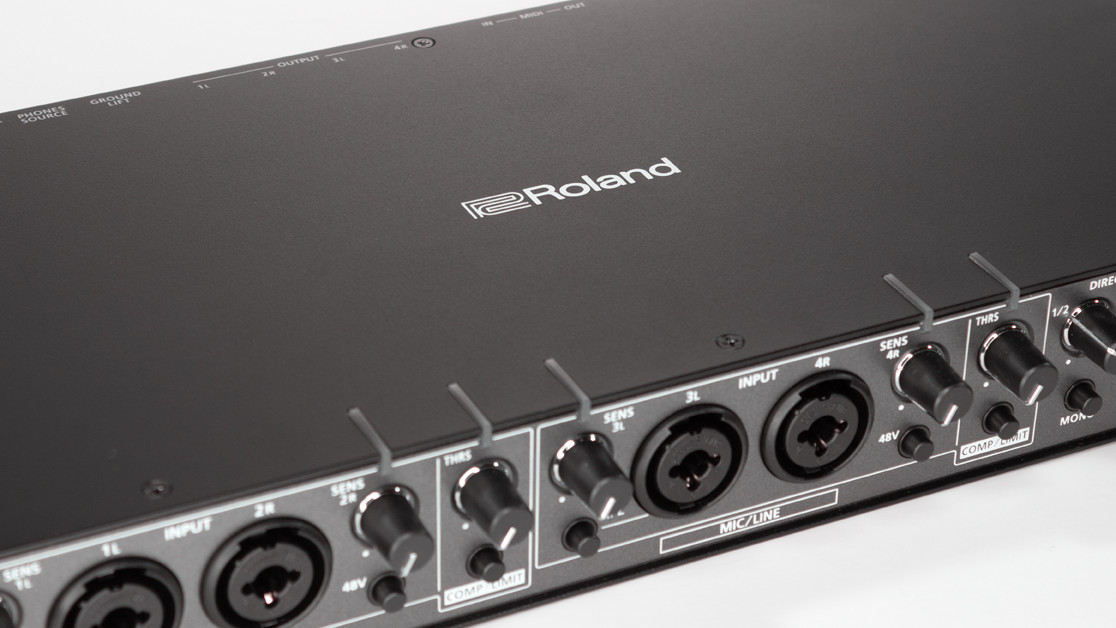 The only things certain in life are death, taxes, and running out of inputs for all the instruments and microphones you want to connect for any given music project.

That may not be everyone’s experience. But if it rings true for you, allow me to introduce you to the solution: Roland’s Rubix 44.

Disclaimer: the Rubix 44 won’t cure death or pay your taxes for you, but it will let you connect your microphones and instruments to your Mac, Windows, or iPad seamlessly via USB.

For those unfamiliar with what an audio interface does, the Rubix 44 is a little box that has all the necessary ports for professional microphones and instruments to plug into, so that you can then connect them to your recording hardware or software via one cable – in this case, USB.

So, for example, if you wanted to record four acoustic instruments live – perhaps you’re recording a jazz quartet – you could use four microphones and connect them to your computer via the Rubix 44.

It can also connect any conceivable combination of other devices compatible with standard instrument or microphone cables. This includes many turn tables, beat machines, electric guitars and basses, microphones, keyboards, and other electronic instruments.

More, the Rubix 44 has four outputs as well. You can connect up to four studio monitors (expensive speakers designed for accurate audio reproduction in a recording studio environment) to the device, instead of relying solely on headphones or stereo monitors.

This makes it a great USB interface for people upgrading their studios. If you currently have a 2X2, or older device, and you’re considering bumping up to something with more inputs, you can also add in some studio monitors at the same time with the 44’s added outputs. In this way, you’re able to appreciate the added channels on both ends.

Before we get into the looks, and ultimately the experience, let’s have a gander at the technical specifications:

Note: Inputs can either be used as XLR or TRS – not both – resulting in a maximum total of 4 inputs no matter what combination of XLR and TRS you use.

Other specifications, including dynamic range information, can be found here at Roland’s website.

The big news above, if you’re not sure what all the specifications mean, is that the Rubix has most sampling rates covered including 192 kHz. In this price range, the Rubix doesn’t have a direct competitor as far as its range and fidelity, at least not that I’ve seen.

Moving on to the device’s aesthetics and design, there’s more than enough to love here. The Rubix 44 is designed for the modern studio – and that means it’s perfectly portable. It also means that Roland understands that studio owners who don’t travel with their gear don’t necessarily conform to traditional norms either. 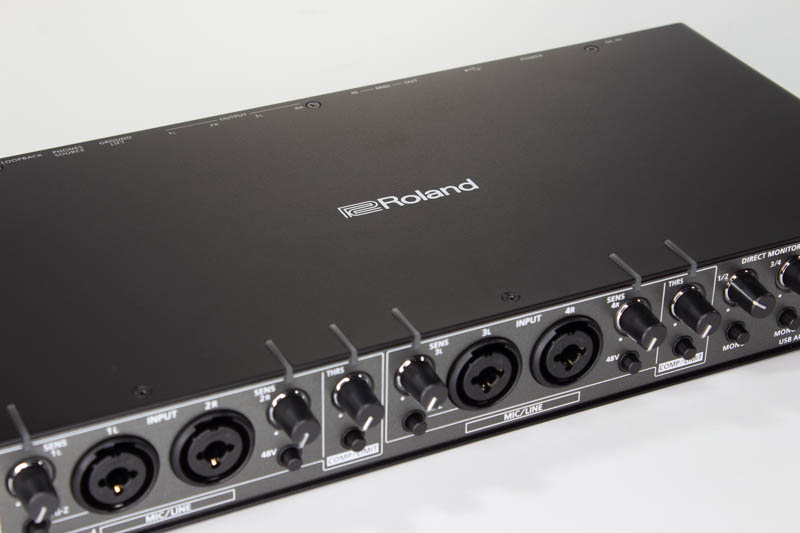 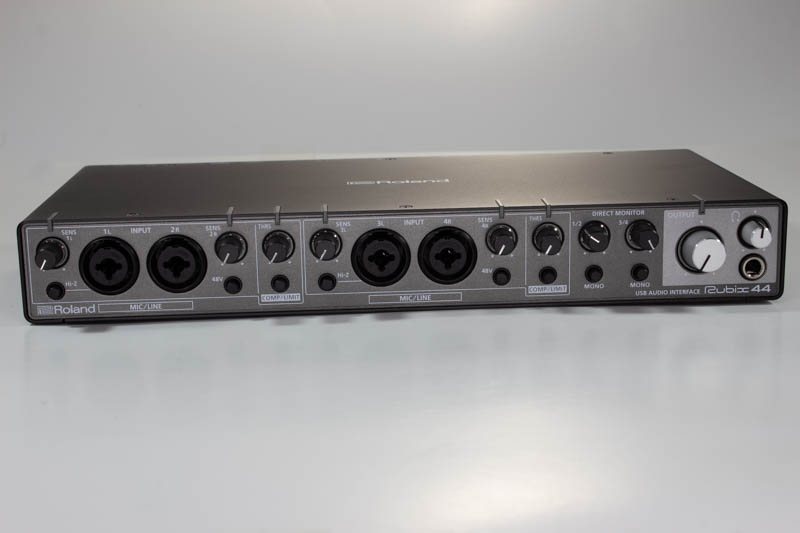 I’ve got the Rubix 44 sitting on top of a desktop that’s tucked into the corner of my studio. In fact, I’ve got gear spread out all over the place thanks to the demure sizes and minimalist cabling solutions of today’s modern music gear.

Not only is this a benefit of its small size, but also clever design as well. The Rubix 44 has notification lights that alert you when you’re blasting over your compression threshold with a red light, or a green one when everything’s properly within acceptable levels.

It’s a small thing, but it means I only have to care about the Rubix 44 when it’s letting me know something’s wrong. No matter where I’ve got it stashed, as long as I can see a flashing light atop it, I can get the information I need from my audio interface.

This is especially useful if you’re playing guitar or keyboards and don’t want to watch your software for peaks – because that’s distracting as hell – but also need to know if you’re getting through the chompy part too hard and redlining.

The Rubix audio interfaces are built inside of metal housings. If you’re considering another device, check and see if the one you’re looking at is made of plastic. Then ask yourself if you’d be better off with gear that can survive falling out of the van, getting stepped on by the drummer, or any number of other tragedies that can befall a piece of equipment.

All of the knobs and switches were stiffer and more tactile than I expected, something I liked very much. The feeling of slight resistance reminds me of an old Marshall vintage floor amp.

In the looks department, all in all, there’s nothing special here – but nothing distracting either. I can’t frown at any of the decisions Roland made with the Rubix series, save the inexplicable placement of the tiny power switch on the back of the machine.

I can’t think of any good reason for it to be there. Roland should have put it on the front and made it a button instead. I don’t want to reach around behind anything in my studio to turn it on: it makes it too easy to accidentally unplug a cable without noticing. And that’s a troubleshooting nightmare.

Luckily, it’s one of the few problems this device has. In execution, it’s excellent.

Aside from the tiniest bit of expected hum when using the built-in microphone preamps, there’s no buzz whatsoever. I’m sensitive to hisses and pops when I’m plugging or unplugging instruments into gear. Roland’s Rubix doesn’t have any, and it’s impossible for me to overstate how wonderfully non-distracting that is.

I did notice a bit of sound-shaping coming out of the Rubix 44, though. Its outputs seem to squeeze the mids a touch, which serves to make snares and guitars sound a bit more ‘rock’ than they should. I should point out that most mixers and interfaces have their own effect on sound, so it’s not so much a problem as it is a preference.

Overall, the Rubix 44 is a delight. Usually, with a product as well-received as this one, it has a premium price tag to match. But Roland sells the Rubix 44 for $299.99, which makes one of the best values among 4X4 USB audio interfaces you’re likely to find.

I highly recommend this for anyone who is ready to step up to professional quality audio gear in their home recording studio or gig setup.