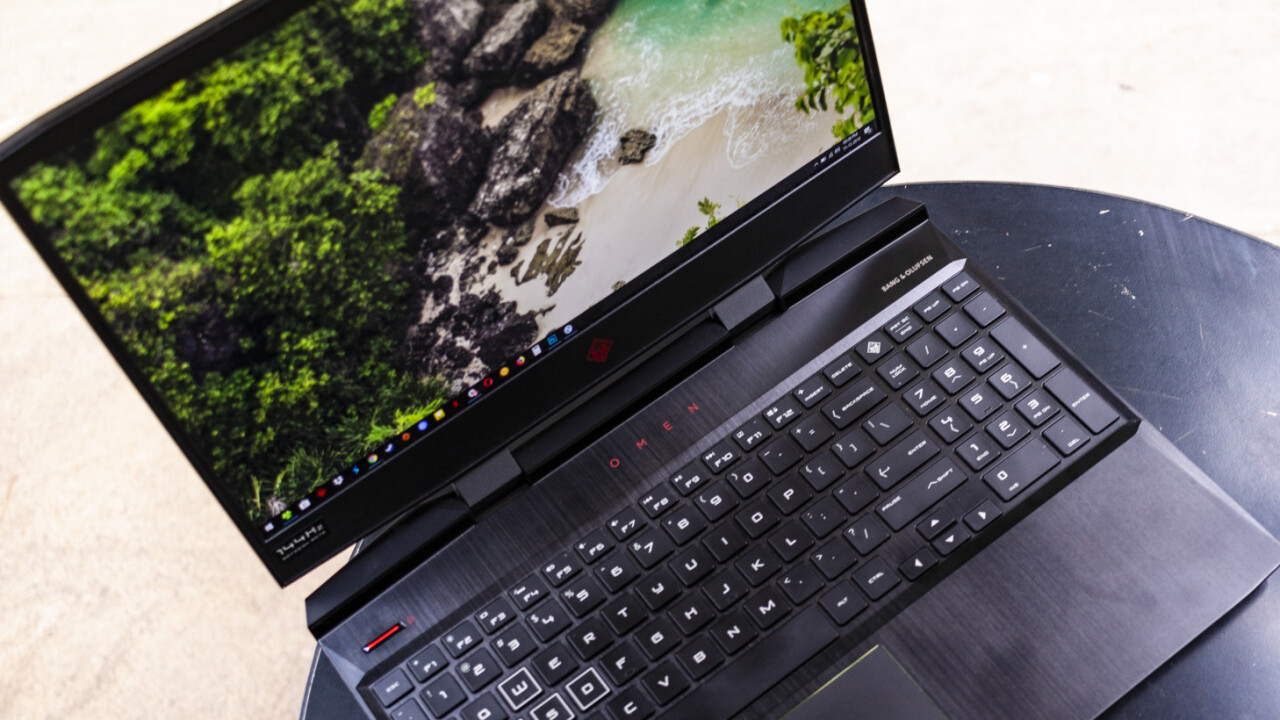 Update (December 14, 2018): The Verge notes that you can get hundreds of dollars off this laptop if you order via HP’s site, configure it with an 8th-gen Intel i7 chip, a 144Hz display, and, an Nvidia GTX 1070 GPU, and use the coupon code 20GAMERHOL at checkout. The deal expires on December 15.

Talk about good timing: it just so happened I was in the market for a new laptop, when HP sent over one of its new Omen gaming machines a couple of weeks ago. And while it’s an excellent performer, it’s not the one I want to buy for myself.

My job involves researching stories, writing, and editing images. It may not sound like much, but I usually have between 30 and 50 browser tabs open, as well as Adobe Photoshop CC, Slack, and a text editor. And I need to be able to flit between these quickly if I want to avoid going insane. Additionally, I’d also like to be able to play some games.

The Omen is intended to delight serious gamers without costing the earth, and it gets a lot of things right. Its only drawback is that it taps out after a couple of hours, so it’s not ideal for working anywhere you can’t stay plugged into a power outlet. But if that’s not your lookout, it’s definitely worth considering.

HP offers the Omen in several configurations internationally; there are both 15-inch and 17-inch models, and you can get them with different hard drives, RAM modules, and displays. I tested the 15-inch dc0085tx, which is currently listed in India at Rs. 165,590 ($2,298) – but you can get a similar configuration in the US at $1,500 with a step down from a GTX 1070 graphics card to a 1060. Let’s take a look at what you get for your money.

The Omen retains most of the design elements from the 2017 version, which is mostly a good thing: a mix of brushed metal, textured plastic, and faux carbon fiber finishes come together nicely, with understated branding, and commendable build quality. I just wish HP would’ve explored more color schemes than the staid black-and-red combination that every other gaming laptop maker opts for with their products.

Look closer, and you’ll see a lot of attention to detail all over the Omen. From the thoughtful placement of ports on the back to allow for hiding your peripherals and cables out of sight, to a sturdy screen hinge that lets you open up the laptop with just one finger, to narrow bezels along the top and sides of the display, this is a well thought-out system. And while the lid flexes just a wee bit, the keyboard is much more solid. Overall, it’s a nicely built machine that looks like it’ll survive a lot of trips to gaming parties over the next couple of years.

Now, a word about its form factor: I researched loads of laptops over the past few weeks, and found that very few of them manage to offer a slim profile while also managing to run recent games at high frame rates. A thinner laptop generally means less room for fans and other things to keep the internals cool, so unless you’re okay spending a lot more money or compromising on horsepower under the hood, be prepared to lug around a slightly larger laptop than what you might use for work.

Coming back to the Omen, it’s over an inch thick, which is to be expected in this category – but that means you might have a bit of a hard time fitting it into some laptop bags meant for 15-inchers. And at 2.32kg, it’s kinda chunky, so you may not want to lug this around all day long. I’d have appreciated a more svelte device myself, but then you simply wouldn’t have as much fun gaming on this machine, what with thermal throttling and capped performance to worry about.

The Omen is nicely kitted for a laptop at this price. The model I tested came with the following internal components:

There’s also a backlit keyboard with four-zoned RBG lighting you can configure with an app, dual Bang & Olufsen-tuned speakers, and an SD card reader.

You also get several ports:

The display is a real treat, in that it offers comfortable viewing angles, gets plenty bright when compared to some other laptops in this price range. and delivers a high contrast ratio. It also has a wide color range for a gaming display, which makes games look vibrant – but it may not be ideal for tasks that require more accurate color reproduction, like photo and video editing. The kicker here is that you get a 144Hz screen, which means it’s got a fast response time and makes games look buttery smooth at high frame rates.

The webcam isn’t very good; you’ll need to be in a well lit room to get decent picture quality for video calls, and you probably won’t want to use it for streaming at all. Thankfully, it’s placed above the screen, so you don’t have to worry about an awkward camera angle that highlights your nostrils.

The speakers sound alright as far as laptop speakers go, and you can play games with them. Just don’t expect to know exactly where your enemy is coming from, or really enjoy your favorite music on these. You’ll want to carry a decent set of headphones instead.

The Omen I tested is an absolute beast. Between its 8th-gen Core i7 processor and the Nvidia GTX 1070 Max-Q GPU, it easily delivered stellar performance across the board. I got frame rates between 90 and 110 fps on Middle Earth: Shadow of War and Redout, while open-world racing sim The Crew topped out at 60fps – all on maximum settings.

For Honor’s medieval swordplay looked and felt gripping, and the G-Sync-capable display does a great job of bringing out plenty of details without any noticeable stutter. You’d probably get a few more frames per second with a full-fat GTX 1070 (instead of the capped performance of a Max-Q GPU), but the compromise doesn’t seem to bog down the gaming experience much – especially when you consider the Max-Q variant allows the Omen to keep from getting too loud when its fans power up to full speed.

As you’d expect, this monster can also handle a heavy workload. It handled my usual setup of some 40-odd Chrome tabs, a text editor, Photoshop CC, and Slack with aplomb. Just don’t expect to get much done without a power source; even with the most aggressive battery saving mode turned on and the screen brightness turned down, I could only run it for about two hours before it asked me to plug in a charger.

That’s kind of a deal-breaker for me, because while I intend to play some modern games on my next laptop, I also need to be able to cover events, write at airports, and edit images and audio on the move. Many gaming laptops manage around four or five hours while running these tasks, so it’s disappointing to learn that the Omen is mostly a house cat in this regard.

Who’s the Omen for?

If you’re looking for a powerful gaming laptop that’s as fun on its own as it is when plugged into a large high-resolution monitor, the Omen is an excellent choice. You get most of the trimmings you’d expect from a modern laptop, with sensible features, plenty of ports, a comfortable keyboard and trackpad, and great build quality.

It’s a little hard to recommend to content creators and anyone intending to use this for work most of the time. There are loads of other options with longer battery life, as well as with screens that offer greater color accuracy. Unless you’re hell-bent on a 1070 GPU, you should look elsewhere for your next laptop.