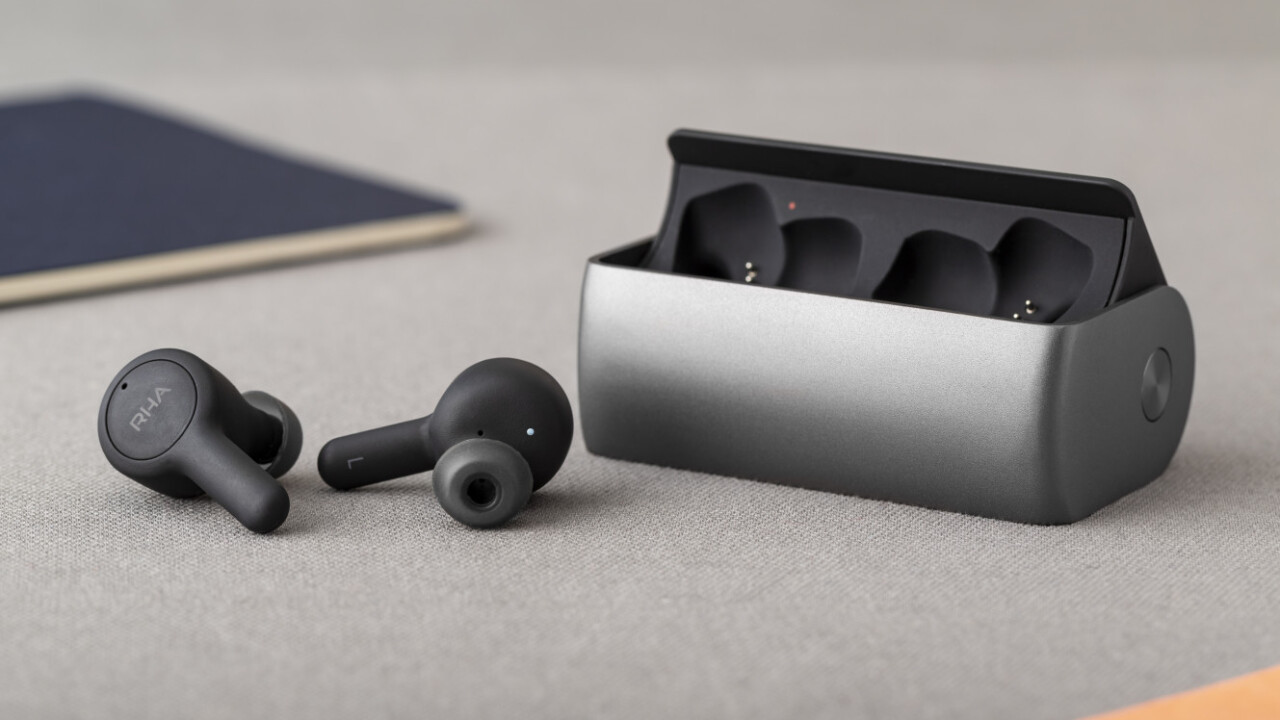 Totally wireless headphones tend to be fundamentally compromised. Sure, you get to walk around like a cyborg, with little bits of plastic and metal hanging out of your ears, but when it comes to the holy trinity of durability, battery life, and audio quality, they underwhelm.

At least, I thought that was the case, and then I got to try out RHA’s newest TrueConnect buds. Believe me, they’re good.

Literally every complaint I’ve had about totally wireless buds in the past, every whinge and belly-ache, doesn’t apply here. Not only do they offer impeccable audio range and depth, but they’re reliable and have an endurance seldom seen among its kind.

But before I get ahead of myself, I should probably do a proper review, shouldn’t I? Right we are…

The RHA TrueConnect buds come in a carry case which looks a bit like a squished cigarette packet — roughly the same dimensions, but it’s not a perfect cuboid. The carry case supports fast charging and provides the buds with an additional 20 hours of listening time. Combined with the 5 hours of juice on the buds themselves, that comes to 25 hours in total. That’s pretty respectable, and slightly surpasses Apple’s AirPods, which offer around 24 hours of juice.

The buds themselves are physically more prominent than others we’ve tested before — like CrazyBaby’s Air 1S, and Anker’s bargain-basement Soundcore Liberty Lite. They’re larger. Like the AirPods, they come with a small “breadstick” that dangles down across the ear.

I don’t mind that though. For starters, it’s more visually apparent when you’re listening to music, allowing you to avoid awkward episodes of inadvertent rudeness. I assume the extra bulk has allowed RHA to cram in further battery storage, too.

It also makes it easier to drop the buds into the charging case. There’s a hole for the breadstick, which ensures it stays fixed in place while recharging and guides each bud to the metal connectors. This design approach solves one of my biggest bugbear with the class, which is that it’s far too easy to accidentally charge only one earbud.

The buds tightly gripped my ears, and I never freted about one potentially falling out. They’re also IPV5 rated, meaning they’re both sweat-proof and splash-proof.

While I was reasonably satisfied with the comfort levels of the RHA TrueConnect, I did feel the need to take breaks from listening every couple of hours. I’m like that with most in-ear headphones, however. In terms of comfort, they simply can’t compete with a pair of comfortable, padded over-ear cans.

Perhaps that’s because there’s something inherently unnatural about sticking bits of metal and silicone in your ear-holes?

As I mentioned, battery life on the RHA TrueConnect is excellent, surpassing even Apple’s AirPods. I was also deeply impressed with the reliability shown by RHA’s first wireless effort. Synchronization issues were few and far between — although very occasionally the left bud would drop out, before very quickly reconnecting.

So, let’s talk about audio. The RHA TrueConnect is an excellent all-rounder and lends itself favorably to a variety of musical genres, as well as podcasts and radio programs.

Take, for example, ‘Graffiti’ from CHVRCHES spectacular new album, Love Is Dead. The Glaswegian band are experts at blending synthesizers with punchy basslines, and this song is no exception. The TrueConnect faithfully preserved Lauren Mayberry’s spine-tinglingly mournful vocals, while simultaneously drawing out Iain Cook’s bass playing into the foreground.

The buds performed spectacularly, whether tasked with playing bass-driven tracks, like GoGo Penguin’s ‘Hopopono,’ or more stripped back affairs, like Peggy Seeger’s folk love song, ‘The First Time Ever I Saw Your Face.’

Who should buy the RHA TrueConnect?

As I mentioned at the start of this piece, most wireless buds tend to be a bit compromised. A testament to this fact is the number of earbuds we receive but ultimately decide not to cover because we don’t think they’re good enough.

The RHA TrueConnect is a very different beast. It’s arguably the strongest truly-wireless effort we’ve seen before. From battery life to audio performance, it surpassed expectations.

The snug fit and IPV5 rating makes these buds a compelling choice for enthusiastic gymrats. They’re also great for the commute, and kept me sane on a recent two-hour journey to London.

If you’re tempted, you can pick up a pair on Amazon or RHA’s website, where they retail for £150 in the UK, or $170 in the US. Units will ship later next month.