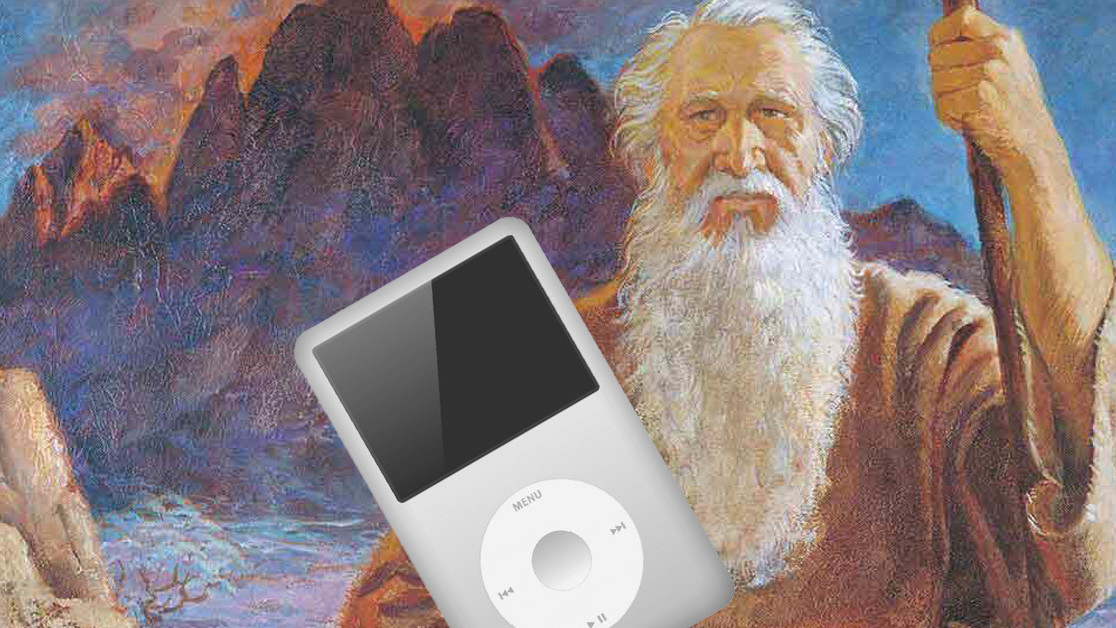 Come, pull up your chairs. Closer. Closer. Good. Now listen closely, we’re here today for one reason: it’s the iPod‘s birthday and I’m going to tell you why it’s the greatest gadget ever.

The first version of the device was released on October 23, 2001 – a full 17 years ago. That means if the iPod was born in the UK, it could now drive. It’s old.

But, before we get into the meat of the argument about why the iPod is the greatest gadget ever, we need to define some things we’re talking about. This will also include a whole section about minidiscs, so strap yourself in.

Alright – so what do you mean by gadget?

It’s a piece of hardware that has one main purpose. This means that computers and smartphones are out, but things like the PalmPilot (an electronic personal organizer) and the Nokia 3310 are in. Make sense?

Yep, but what kinda iPod are we talking about here?

Basically, I’m talking about the old click-wheel classic. Everything in the range from the very first iPod:

To the final iteration, the iPod Classic:

The iPod Nano (until the 6th and 7th generations) and the iPod Mini are also acceptable members of the iPod family.

This means it’s a big shake-of-the-head to the iPod Shuffle (I like to browse my music, thank you very much) and the still-available-from-Apple iPod Touch (if I wanted a shitty iPhone, I’d buy a shitty iPhone).

Basically, if it has a clickwheel and a screen, it counts. It counts hard.

Understood. So why’s the iPod the greatest gadget ever?

Look, I could go into the impact it had on the music industry, or how it revitalized Apple’s business, but those arguments have been made countless times before. Instead, I’m looking at the impact the iPod had on me.

We’re going back in time, aren’t we?

I got my first MP3 player around 2002 – a little Panasonic device powered by a single AA battery and with an SD card slot. In that slot I had a whopping 64MB of storage. In other words, it held just over an album’s worth a music.

For a while, this was enough. I could happily headbang while walking the dog. Then, disaster struck. I got a Saturday job.

On one hand, it was the worst job I ever had. I was creosoting fences, nailing bits of wood together, sweeping roads, pressure-washing concrete – basically a smörgåsbord of shit work. But there was one positive to this totally-illegal-labor-for-a-thirteen-year-old: I got to listen to music all day.

The only problem was that aforementioned single 64MB SD card. Listening to the same album eight times a day can really take a toll on a person.

Luckily, I was introduced to a better option in the same way we are first confronted with things like bad language, unsatisfying snogging, and sniffing glue: on the school bus.

And that better option? Nope, not the iPod. Minidiscs.

Yes, Minidiscs – the most rock and roll format of all time.

Well, at the time SD cards were crazy expensive, so upgrading to one with larger capacity was way out of my price range. Constantly adding and removing albums was also a hassle.

Minidiscs also had a recording mode called LP4. Basically, this let you fit 320 minutes of (low quality) music on an 80 minute disc. Minidiscs were also reasonably cheap (meaning you could carry several on you) and you could transfer music to them from a computer. This, to my young teenage mind, made them perfect.

So, I saved up the money from my Saturday job, and got myself this:

And everything was great. I became a minidisc maverick. Favorite songs? I had a minidisc for that. Genre collections? Right over here on this minidisc. An artist‘s discography? Guess what – it was on minidisc.

I had dozens of these things nestled amongst crusty socks and other smelly detritus that littered my bedroom floor. And it worked great…

I feel there’s an “until…” coming…

…I came across the iPod.

The moment has stuck with me. I was on holiday with my family in glorified caravan and not much to do. Remember those pre-WiFi days where your only entertainment was what you had with you?

It was the first time I used my sister’s iPod. While the minidiscs I had could hold six or so albums worth of songs, you still had to flick from track-to-track to see what was on it. Listening to a specific song wasn’t easy. Hell, for a while I genuinely kept a notebook of what songs were on what minidisc. I was not a cool child.

Using that iPod was something else though. It was a revelation. While there were songs I desperately wanted to hear but couldn’t, she had every single song she liked on this palm-sized device.

There have been a few times technology has given me what I can only refer to as an epiphany (I get you, religious folks) – ISDN internet, the iPhone, my first laptop – but nothing has ever felt as right as the iPod did at that moment.

And… you got one?

It was the next step of my love affair with the device. My first was an iPod Photo:

And the second (and final) was a 160GB iPod Classic.

So you grew up with iPods?

Wherever I was, my music was with me. At work, on holiday, out with friends – everywhere. The iPod was a constant. It soundtracked my life.

I found the iPod to be hardy as well, with mine surviving a multitude of drops and extreme weather. And it just worked.

Yes, there were other good MP3 players, but the iPod was simple enough for a child to use, but had enough complexity to keep music nerds hooked.

It’s easy to forget how easy iTunes made music management too. Other devices generally required a lot manual work, with you dragging and dropping music to and from the device. On iTunes, it just synced.

I can’t overstate how important this was to someone who spent countless hours tweaking their music on iTunes, standardizing file names, creating genres, and finding high quality artwork. All so my iPod would encapsulate my feelings about music.

What really made the iPod the greatest gadget ever, rather than just a brilliant device, is how it changed our relationship with music.

Yes, Walkmans and other portable music devices (including my minidisc player) had been around for a while, but they were always poor substitutions of the at-home experience. That was where proper listening was done. It was a precious, solitary time. You could explore music and spend time picking the perfect album for your mood. It was special.

And what the iPod did was allow you to take that experience everywhere.

That might not sound too revolutionary, but consider other art forms. As good as modern day televisions have got, the cinema is still the best place to see a movie. No matter how good screens are, nothing beats really seeing a painting in a gallery. The iPod changed the way we interacted with art.

But what about streaming music? Surely that’s better than an iPod?

Look, streaming’s great. It’s normalized having the ultimate listening choice, but the music library model is still better. The iPod was the ultimate curation tool.

There’s a reason why this article included so many anecdotes – because the iPod itself became a reflection of my life with music.

It stored the forgotten songs, the one-hit wonders, the dodgy rips, the albums I loved, those I didn’t, and everything in between. Letting someone flick through your iPod – or doing the same to someone else’s – was as good as a long conversation.

As brilliant as Spotify and other streaming services are, they don’t change to reflect your music taste. Yes, you have playlists, but when you open the platform, what do you see? Generally, a selection of music and recommendations chosen by someone else. Not you.

An iPod only changed as you willed it to. If you put a new album on there it appeared. If you left it alone, it stayed the same. It wasn’t just a tool to listen to music with, it was your tool. That’s why the iPod is the greatest gadget of all time.

And if you don’t agree? Well, friend, it looks like you and I might have to step outside.