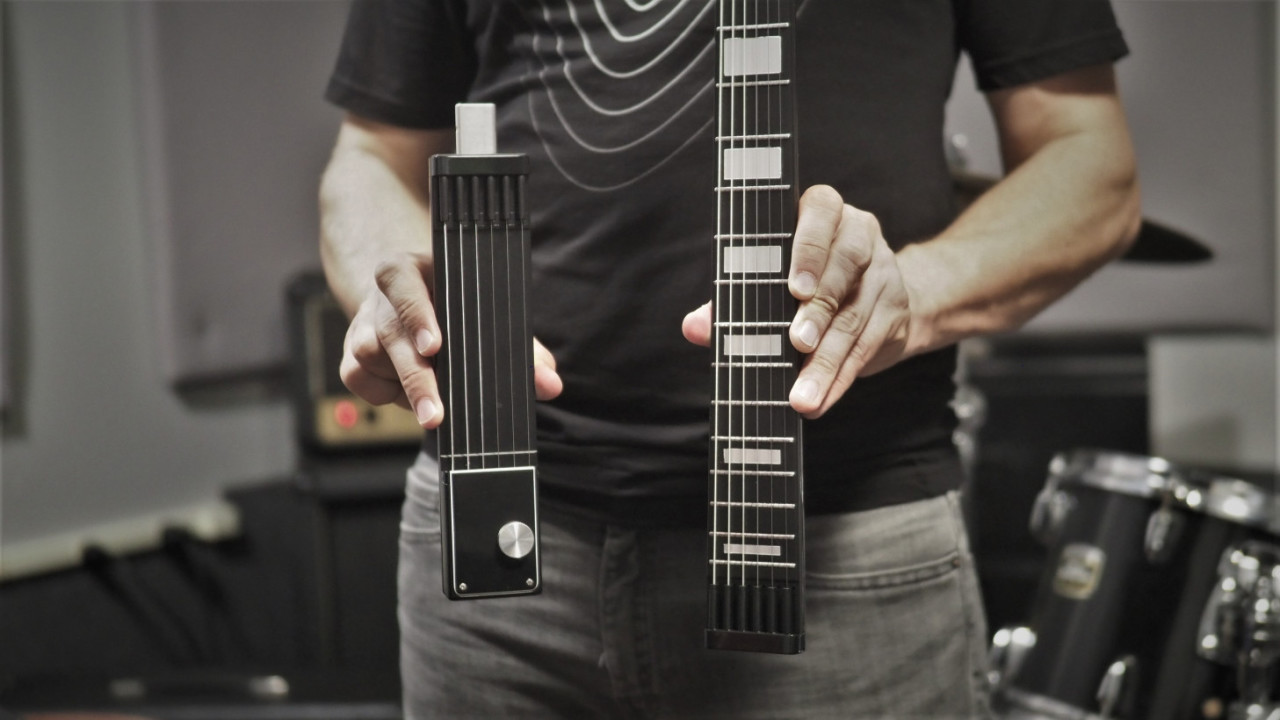 If you’ve ever tried to learn a musical instrument, you probably know that it’s more important to practice consistently every day than cram a marathon session before a lesson. Problem is, most instruments are bulky and loud, limiting the times and places you can practice.

Jammy wants to be the solution for guitarists. It’s an electric guitar that can split apart into various pieces for easy transport. A Stratocaster or Les Paul is about 40 inches long, but Jammy is just 17-inches when split into its component pieces. That’s small enough to fit in a backpack or carry-on.

Moreover, Jammy can output to MIDI, and never needs tuning. In fact, its digital output means you can quickly switch among ten different tunings, while the design still allows you to replace strings and adjust their tension to your liking.

It started off as an Indiegogo campaign last year and is expected to ship this November. Pre-order pricing is $349, while retail is $449. There’s also an optional ($50) detachable frame that fills out the shape more like a real guitar.

Disclaimer: I’m not a guitarist. One day, but not I’m not cool enough yet. I do play piano though, and wish I had a similarly portable solution.

Jammy consists of two main pieces: a neck with 15 standard-sized frets, and a slim body where you do the strumming. The strings on both sections are not mechanically connected – you couldn’t take the thing apart otherwise – but instead use pressure and velocity sensors that communicate with a digital signal processor. Jammy says you’re still able to perform bends, hammer-ons, pull-offs, palm muting, and other guitar-y things.

Because it operates in the digital realm, you can switch between a variety of onboard guitar and pedal sounds, and arrange FX chains via the companion app. Pushing on the volume knob also allows you to switch between sounds without having to open the app. There are both 1/4″ and 1/8″ audio outputs, as well as a USB-C port for charging – battery is rated at four hours.

That USB-C port also outputs MIDI, so even if you don’t like the idea of jamming on a digital guitar, it could still be an attractive solution for people who want to compose tracks with MIDI, as there are far fewer options in the guitar world than for keyboard players. Another neat trick: it can automatically save everything you play, so you don’t have to worry about losing that masterpiece you composed in a random moment of inspiration.

In case you’re wondering, I couldn’t detect any latency playing the two guitar chords I know. In fact, maintaining low latency is why Bluetooth isn’t supported for audio; it’s only used for connecting to the companion app.

It won’t be a product for everyone. The prototype I used had some creaky plastic, and though Jammy says it’s put a lot of effort into durability, that’s something it can only prove in practice. And again, I’m not a guitarist so there could very well be caveats on the feel I’m not picking up on.

For its part, Jammy does not claim to replace a traditional guitar. From its FAQ page:

We do not intend to replace a standard guitar. Our instrument is made for people who just want to strum a chord or two while traveling, but can’t stand the hassle of carrying a full-fledged six-stringer around. We also target guitarists who need a stringed MIDI controller in their recording setup. We have nothing against your ordinary axes, we actually love them.

Still, as far as I can tell, there isn’t anything else quite like it on the market. If Jammy delivers with its final product, it should at least provide something close enough to a real guitar in a super-portable package you can use anywhere.

I’m looking forward to spending more time with it once we get our hands on a production unit. Maybe then I’ll learn more than two chords.

If Jammy happened to strike a major chord with you, you can pre-order at the link below.