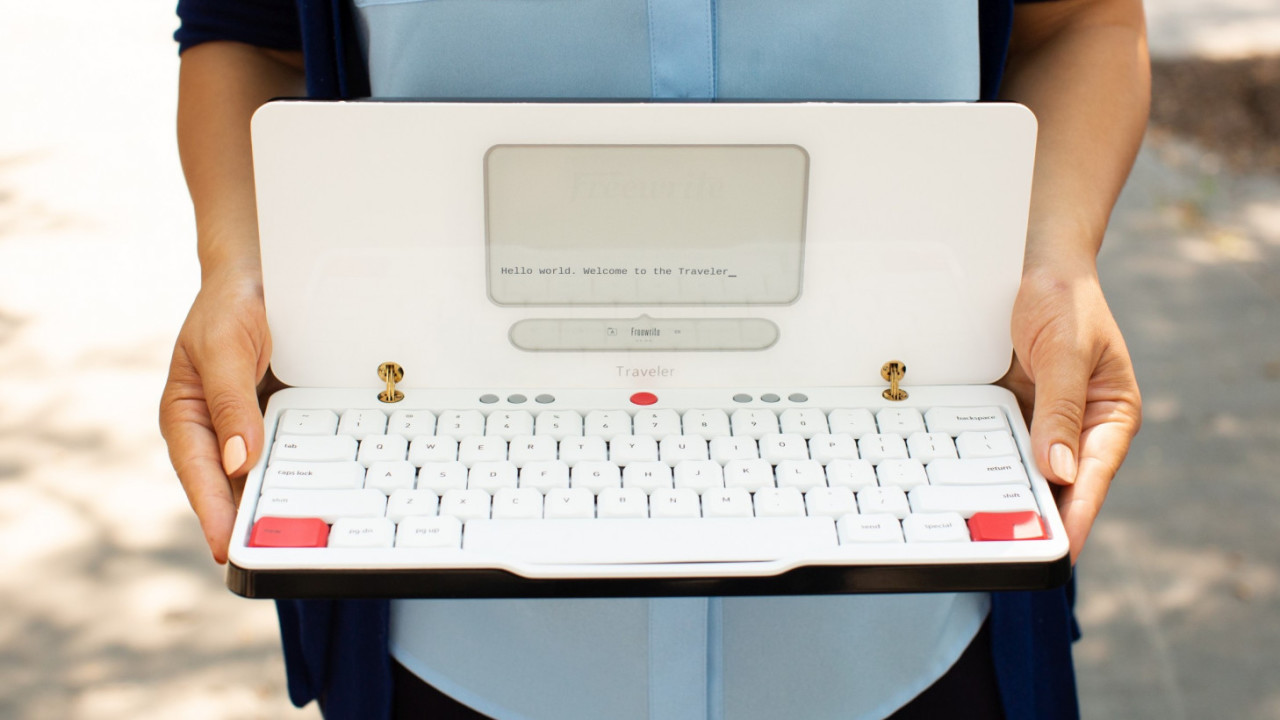 Avoiding distractions is the biggest challenge to writers in 2018. Notifications, Netflix, email, YouTube, calls, games, and more all seem particularly appealing as you sit down to work on your next masterpiece – or in my case, article.

That’s where Astrohaus’ Freewrite Traveler comes in. It’s basically a portable, foldable typewriter that strips down the “techy” aspects to the bare minimum for productivity. You have a Kindle-like monochrome display for visibility in the sunlight, and WiFi connectivity for automatic cloud syncing. A couple of function buttons let you access document folders for reference too.

And that’s about it. The Traveler is so spartan, so focused on writing momentum, that you can’t even copy and paste. Heck, the keyboard doesn’t even technically have arrow keys, although Astrohaus will let you use WASD to navigate around text – something that you couldn’t even do on the original Freewrite.

As a recap, that original Freewrite was shaped more like a traditional typewriter, which allowed it to have full-size Cherry MX Brown switches and a nice mechanical heft, but also meant it was too bulky for to stuff in the average bag.

The Traveler uses scissor-style switches instead. It would’ve been nice to see Cherry’s new low-profile switches, but in my brief demo, typing on the Freewrite was as satisfying as any scissor keys I’ve used. The 2mm of travel probably helps with that.

The battery lasts 4 weeks with about 1 hour of daily use, and charges via USB-C. It can save 1 million+ pages internally and sync to Google Drive, Dropbox, Evenote, and Astrohaus’ own Postbox, so storage won’t be an issue.

Astrohaus says people who used the original Freewrite were about twice as productive; The new model’s portability should hopefully mean you’ll be just as productive in more places. Unfortunately, you’ll have to wait a while to get one. Its Indiegogo campaign launches today withan early bird pricing of $309 (MSRP $599) and is set to ship next June 2019.

That’s a long time to wait, and any crowdfunding campaign comes with risk of delay and disappointment in the final product. But considering the company is already well past its funding goal and has already delivered on the original Freewrite, it’s not as tenuous a prospect as some other campaigns.

I for one, can’t wait to get my hands on one. Maybe then I’ll finally get through my backlog of articles. In the meantime, I guess I’ll go back to watching puppy videos on YouTube.