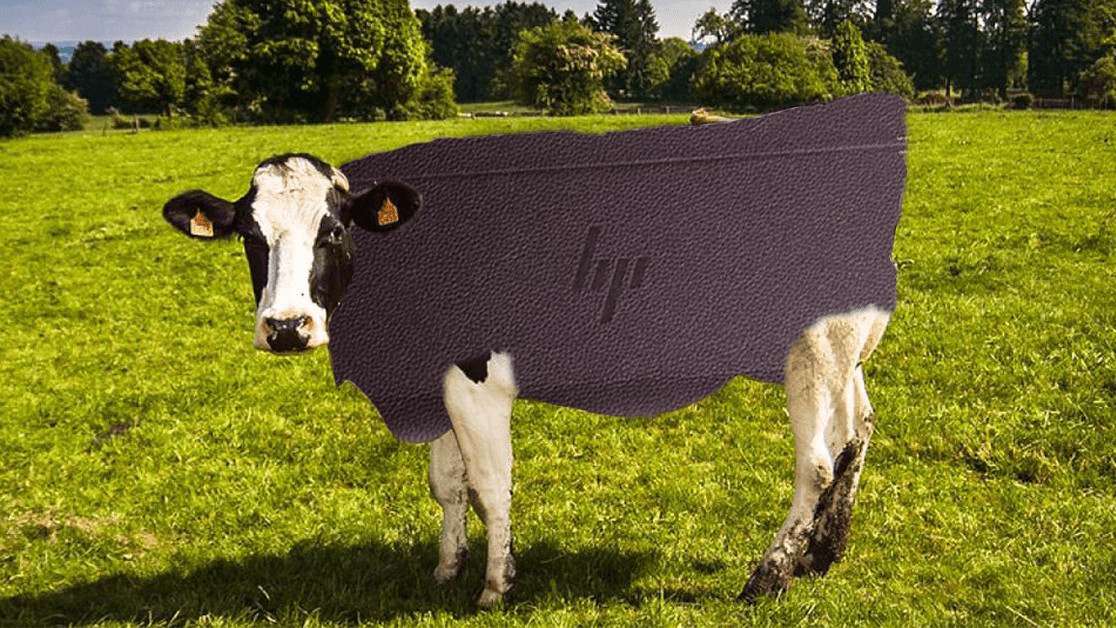 We have a lot of questions about HP’s lovely new leather-bound laptop, the Spectre Folio. Will it have that gorgeous leather smell? Will it age like a fine book? Just how sticky will it get?

But, most importantly of all, how many cows are going to utter their ultimate moo before being murdered and turned into HP Spectre Folios?

We’re here to find out.

The first port of call was trying to get some information from HP itself. I was hoping I’d get a straight answer when I asked:

Unfortunately, my cunning approach didn’t exactly, you know, work. The answer I received?

A percentage isn’t going to cut it. I need to know the precise(-ish) number of cows that are going to die, dammit. This means we need maths. First stop, we need to find out…

The size of the laptop

We’re getting closer. Now, let’s convert it out of the heathen imperial system and into the cold, harsh world of metric:

Next up, we have to work out roughly how much of HP’s Spectre Folio is covered in leather. Let’s look at some photos.

Clearly, leather’s coating both sides of the device. We’re getting somewhere.

This selection shows us that the only other substantial bit of leather is underneath the keyboard (2nd picture from the left). Let’s have a closer look.

Ah, so there’s a touchpad in there too, good to know.

First things first, leather is covering both the top and bottom of the Spectre Folio. To find the area of this coating, we’ll times the devices width (32cm) by its depth (23.44cm), before multiplying that by two. This gives us 1,500.16cm². Or 0.15m².

Then, we need to work out the area of the leather around the trackpad.

Next, we need to work out how much leather an average cow can produce. And by work out, I of course mean take a figure from elsewhere.

Getting hold of specifics was slightly tough (I did learn that a single cow can produce 20 American footballs though), but this blog on upholstery states that an average cow hide will product 4.75m² of leather. That’s good enough for me.

This means that an average cow can produce 28.5 Spectre Folios.

To actually discover how many cows will be felled by HP’s hands, we need to work out the number of Spectre Folio’s that’ll be shipped. Time for some more assumptions.

To begin, let’s assume that 2017 and 2018 will have very similar sales figures. So, according to Statista, HP shipped 55.48 million computers in 2017. This gave them 21 percent of the personal computer market share in that period.

Now, IDC found that the “Detachable Tablet” category (which the Spectre Folio falls under) shipped 21.9 million units in 2017. These devices accounted for 5.2 percent of the personal computer market.

For the sake of argument, let’s assume this is true of HP’s sales too. This means that 5.2 percent of its 55.48 million computers shipped will be detachable tablets, which comes to 2.88 million.

A quick glance on HP’s website shows that it currently sells six different types of 2-in-1 devices. For ease, let’s say HP sells an equal amount of each. This means that over the course of a year, HP can expect to sell around 480,000 Spectre Folios. Which sounds pretty realistic.

How many cows will they need to murder if they sell that many?

HP is going to send 16,842 bovines to the murder factory to support its new product line.

That’s an awful lot of cows.

But how many cows is it really?

So, good riddance? Maybe? I guess?

If you’d like to support the cow slaughtering cause and buy a HP Spectre Folio, head in this direction. No judgement over here.