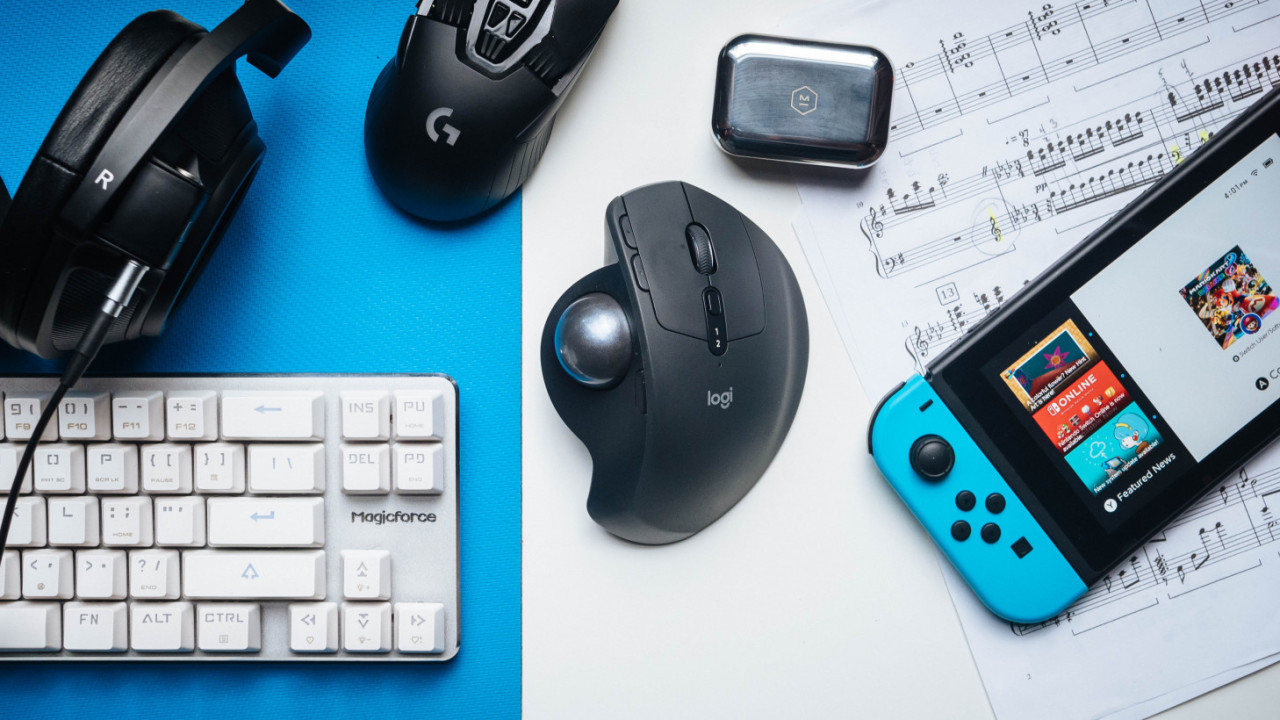 Using a trackball mouse in 2018 might seem as anachronistic as buying a zip drive or answering machine, but unlike those things, trackballs have some diehard fans. Some think they’re superior to traditional mice for design work, some use them for comfort reasons, and others just think balls are fun. I’ve been using Logitech’s latest trackball mouse, the MX Ergo for the past month – it nearly convinced me to make the switch myself.

Like the even-more-recent MX Vertical, the Ergo’s main selling point is it’s ergonomic design. It includes an adjustable plate that lets you use the trackball flat against your desk or titled into a semi-vertical position. While I’ve never felt uncomfortable using a regular mouse, the upright position on the Ergo does feel more comfortable, and I can see how the stationary trackball setup could reduce strain to your arm or wrist.

It only took a few minutes to get used to zipping around with a trackball, and a few days before it felt natural. It also wasn’t long before some the benefits became apparent. l can see why some designers and artists prefer trackballs; I don’t run out of mousepad room when making selections in Photoshop, and I don’t have to constantly readjust my position. I also seem to have a bit more control for fine movements, and Logitech includes a sensitivity button to slow down tracking for tasks requiring utmost precision.

But my favorite thing about using a trackball is its placement flexibility. Sure, it’s a lot bigger than an average mouse, but as you don’t have to move it around your desk, it doesn’t require a large swath of empty space.

As much as I like to think of myself as someone who keeps his desk tidy, it’s not true half the time. I have a large mousepad on a fairly large desk, but it’s often strewn with review units, documents, food, etc. I usually keep my digital piano on my desk too, meaning everything really has to be tidy for me to take advantage of my full mousepad.

None of that matters with the MX Ergo. I leave it in one place and never have to move it. And when I do move it, it’s because I can use it on any surface.

My PC happens to use a 55-inch TV as a monitor, so sometimes I’ll bring the trackball with me to the couch when I want to watch something. Other times I’ll place it on the small flat portion of my digital piano or even on the keys itself. A trackball mouse is a godsend here; it’s a pain in the butt trying to move around music software using a regular mouse with a limited surface area. For a trackball, a small surface makes no difference.

There are really only two reasons I haven’t fully switched over. One, I prefer a few more buttons on my mouse. The MX Ergo has more customizable buttons that your typical mouse, but I’ve been spoiled by Logitech’s own G903. It has a myriad of things to click, all of which I use regularly.

Second, as you might’ve guessed given my other mouse, is gaming. Now, I got used to gaming with a trackball for gaming quicker than I expected, and actually think it’s perfectly fine for most titles. Unfortunately, I usually play FPS games (CS:GO in particular) on my PC, and the MX Ergo just isn’t made for that type of gameplay. Even if I could get used to the form factor, the tracking hardware isn’t quite fast enough for high-level play.

There is something immensely satisfying about quickly sending the trackball spinning and landing a headshot, it’s just I can’t play as well with a trackball overall. Maybe things would be different if its hardware were designed with gaming in mind, but as is, I prefer using the G903 for any title with a crosshair.

But those caveats are individual to me. Outside of FPS games, I find the Ergo’s trackball perfectly usable, and most people don’t use as many buttons as I do. It’s arguably more comfortable than a traditional mouse, is great for editing images, and can easily work on any surface. Oh, and battery life has been good enough – 4 months on a charge, and I haven’t charged it again since I recieved it – that I can actually forgive it for using a micro USB port.

The MX Ergo didn’t quite win me over, but I split my time evenly between it and the G903. I don’t expect trackballs will ever become particularly popular in an age where most people don’t even use a mouse in the first place, but if ergonomics or limited space are concerns, the MX Ergo is worth your consideration.