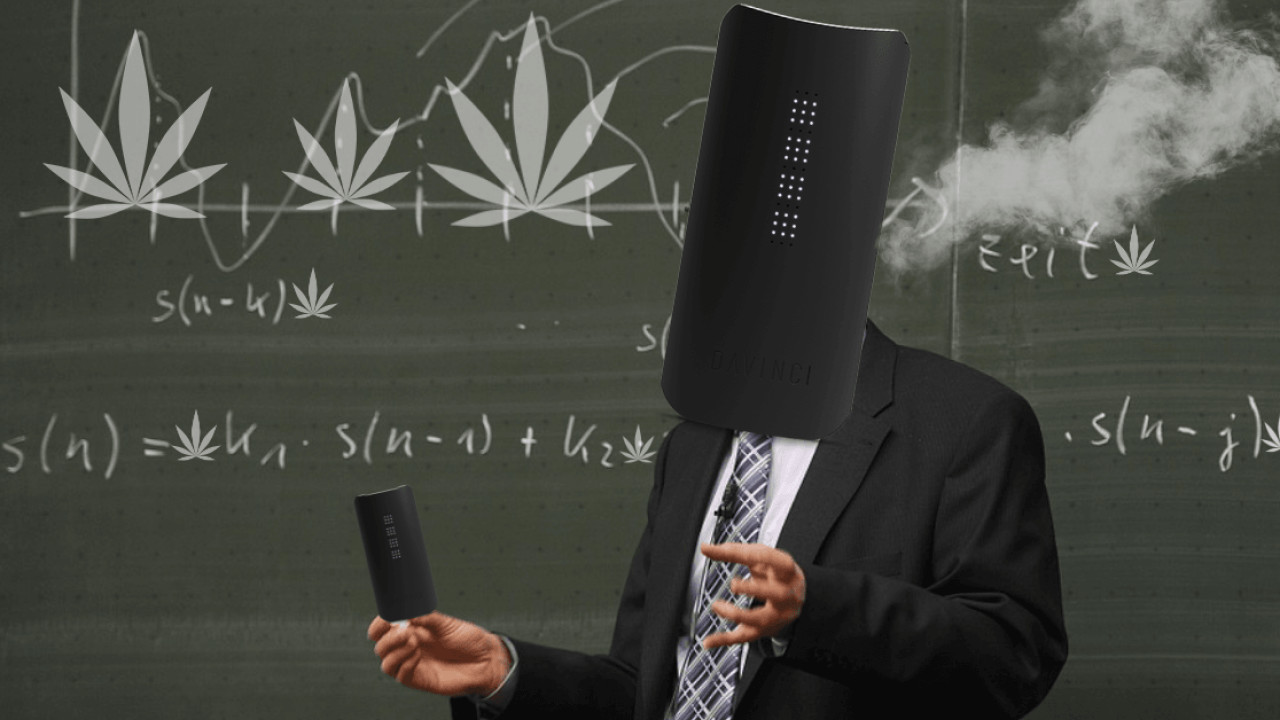 Sorry, what’s that? You roll your weed up in paper? And burn it with fire? Look, I admire the nostalgia, but it’s all about the vapes these days and I want to find the best the world has to offer. So, this time round, I’m going to be looking at the Davinci IQ.

While the vape market is as crowded as a tube system during rush hour, a few models have stood out. And alongside the Pax 3 – which we have already covered – the Davinci IQ is one of the vapes at the top of the smokey tree.

While the IQ is a bit of a looker…

…it has less of the slick, polished, Apple-esque feel than the Pax 3.

It’s weighty and feels rugged, like it could survive a few stoned fumbles. Size-wise, it’s small enough to be easily transportable, fitting snugly in the palm of the hand.

What are its, uh, key features?

Well, number one is that it lets you vape weed and get high.

Anytime. So the Davinci IQ has two compartments, one on the top and one on the bottom. The former houses the battery and the chamber through which the vapor travels.

And, when the lid is closed, you vape by drawing in through the mouthpiece. Here, because I know you’re interested, is a photo of the mouthpiece

This lid also opens up, with a battery and a chamber underneath.

The removable battery is a double-edged sword. On one hand, this will extend the life of the vape, but on the other, it does remove a sense of slickness from the device.

I did find an issue with the lid design though. On occasion, while I was smoking the top lid would creep open. It wasn’t a huge issue, but was slightly irritating – especially as a magnet could probably solve this problem.

What about the bottom lid?

I didn’t find the same problem here, so it could be down to the way I was holding it or a quirk in the unit I was using.

Anyway, the bottom of the Davinci IQ is where you put your devil’s lettuce.

That ball on the lid you can is referred to as ‘The Pearl.’ It’s made from zirconia – just like the vaping chamber – and helps spread the heat across the packed bowl.

One thing that surprised me was that this area was smaller than some of the other vapes I used. It’s not a huge issue – there’s still plenty of room in there – but it could turn off the heaviest smokers.

Does the Davinci IQ smoke well though?

Very well. Very, very well. The device is wide enough that you can comfortably fit your lips easily over the top of it, making dragging easier, and you can easily conjure satisfying clouds of vapor.

This positive experience was also substantially improved by the extended mouthpiece included in the kit:

This attachment made it easier and more enjoyable to toke from the device, as there was no awkwardness in attaching your face to the smoke hole.

Another element that makes the Davinci IQ quite so good is the control you have over it while smoking.

To turn it on, you tap the power button on the right side of the device five times. It then buzzes, the LEDs on the front of it spring to life and it begins heating up.

This is where it gets cool. Those four blocks you see in the second half of the GIF represent what Davinci calls ‘Smart Paths.’ In other words, they’re pre-assigned temperatures. This is important as different cannabinoids are released at different heats, so this feature helps get you to your perfect personal high, without the need for knowing the precise temperature.

But, if that’s what you’re after, the Davinci IQ has your back. With a tap of a button, you can change the device to a precise temperature.

Of course, you can do this on other vapes with an app, but I found the ease of this approach a huge boon – especially when it was something I wasn’t expecting to care about. Now? I genuinely care about the temperature I smoke at.

Still, there’s a trade-off to this, as the buttons and amount of lights do give the Davinci IQ a workman-like look, rather than a futuristic and smooth alien aesthetic. That might not be a problem for many people though.

From my perspective, the amount of settings and features you can activate with those buttons (for example, stealth mode or checking the battery) outweigh what you lose in looks. It really is an absolute pleasure to use.

What about the battery life?

Overall, the device would easily last me for an evening or two smoking, but the battery life didn’t seem as extensive as other vapes and charging took a bit longer than I expected, but this wasn’t really a deal breaker.

How much is it going to set me back?

Well, all this quality doesn’t come cheap. The Davinci IQ will set you back around $275. Now, it’s a lot of money – especially if you’re used to only needing some papers and roaches – but I thoroughly enjoyed using it and, overall, it feels very sturdy and well put together.

The Davinci IQ is for weed enthusiasts who want control over their smoke. It’s for someone who enjoys good design, but finds direct functionality more important that just looks. Basically, it’s for anyone who takes their marijuana seriously and wants a high-quality vape.

I honestly didn’t expect to enjoy the Davinci IQ as much as I did. Yes, there are some small things to improve in further iterations – such as a slightly more secure lid and the battery life – but overall I found it to be a great piece of technology.