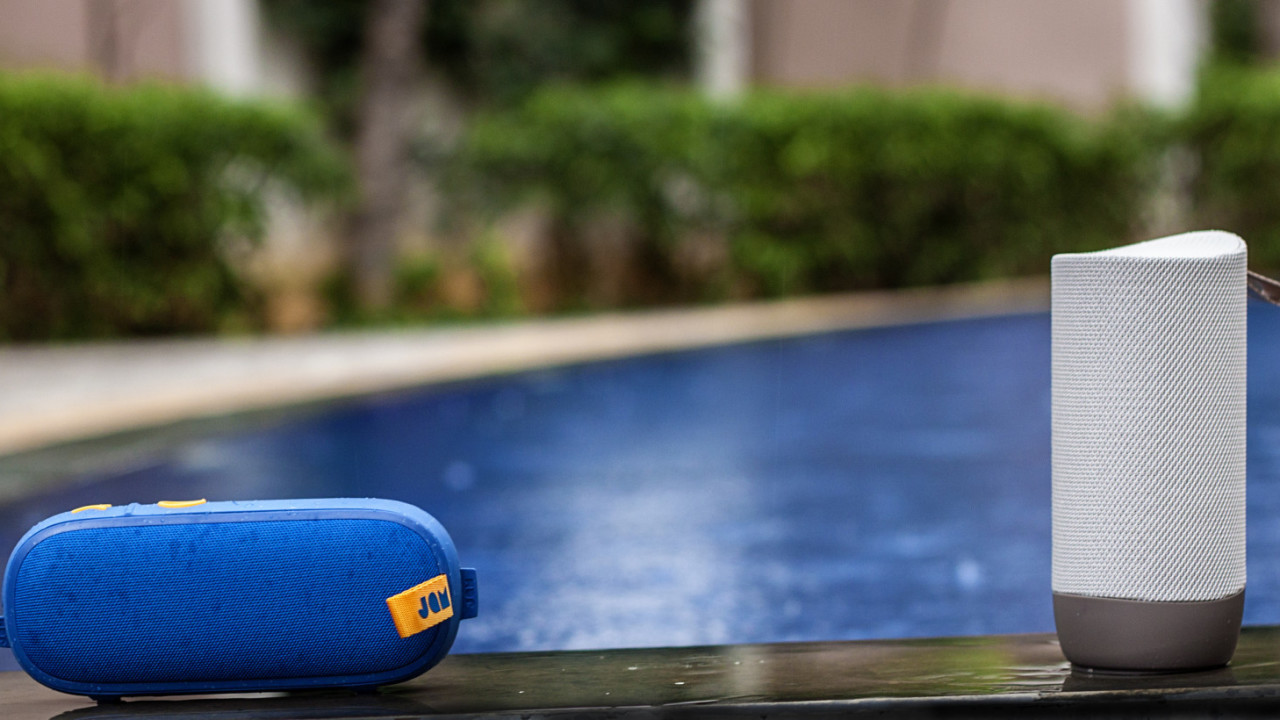 Michigan-based audio brand Jam isn’t looking to reinvent the wheel with its new range of Bluetooth speakers – but it is trying its darnedest to make them look cute as buttons, while surviving pool parties and days out at the beach.

I got to test the inventively named Hang Around speaker, as well as one called Zero Chill. While they’re not the best speakers I’ve heard, they’re pretty compelling for outdoorsy folks who want durable audio gear on the cheap. And the fact that you’ll never have to worry about carrying a charging cable for these sweetens the deal a fair bit.

The Hang Around speaker features a simple pill-shaped design with a rubber-coated body, oversized buttons at the top, a fabric loop to hang it with, and a microUSB charging cable that slots into the device for storage.

The Zero Chill speaker looks like a cross between the Google Home and the Amazon Echo, but it’s slimmer than both devices. The rubberized bottom portion is actually a cavity for the microUSB charging cable, which can be spooled out to juice up the speaker while it’s placed vertically.

Both speakers are IP67 rated, which means they’re dust-resistant and can withstand splashes of water, as well as being submerged down to a meter’s depth for half an hour.

In real life, that means you can use these speakers around water or in the shower without having to worry about damaging them. I left them out during a heavy downpour, and even left them right by a swimming pool where they were frequently hit with splashes of water as swimmers passed by – and they worked just fine afterwards.

I was particularly impressed by how Jam designed both speakers to fit their charging cables within their bodies, so you don’t have to worry about losing them or leaving them behind before you leave for a trip. The Hang Around has spaces for both ends of the cable on its sides, and the rest of the length slots into a cavity along the bottom, like so:

The Zero Chill’s bottom cavity has room for a short spooled cable, and said cable connects to the microUSB port down there thanks to a right-angled jack. There’s an additional cutout to make it easy to plug the device into a nearly wall socket or portable charger.

As with most Bluetooth speakers, these two don’t do a whole lot beyond pairing wirelessly to play music and letting you answer calls. However, you can additionally connect two of each speaker model together for stereo sound. Sadly, I couldn’t test this out for myself – I received one of each for my review, and simply couldn’t get them to pair with each other.

The Zero Chill speaker sounds pretty good for $60. It can fill a room at its maximum volume, but rock and metal tracks tend to push the speaker a bit too far, causing a small amount of distortion. You should be just fine with pop and dance records, though.

Sadly, the Hang Around speaker, which is $10 cheaper, doesn’t perform as well. Its output starts to distort at a lower volume than the Zero Chill, higher frequencies sound rather sharp, and the bass reflex port at the back doesn’t do much to boost the low end.

Both speakers pair quickly and painlessly, and claim up to 20 hours of play time on a single charge (the Zero Chill is rated at 22 hours). That’s fairly accurate, and so you won’t need to worry too much about juicing them up often on your next camping trip.

Who are these speakers for?

With their thoughtful designs, Jam’s new offerings are a smart choice for anyone who doesn’t want to worry about their speakers getting dinged up or damaged by water. They’ll happily survive some roughhousing outdoors, and still keep the party going.

Just don’t expect high-end audio output from this. The $150 Harman Kardon Traveler considerably outperforms it on that front, and packs a phone charger into its svelte body to justify the higher price.

The $50 Hang Around simply doesn’t sound very good, and so I’d recommend that you shell out just a bit more for the significantly better $60 Zero Chill. It’s well built, easy to use thanks to its large buttons, and can take a beating. The fact that it houses its own cable makes it easy to pack and carry with minimal fuss.