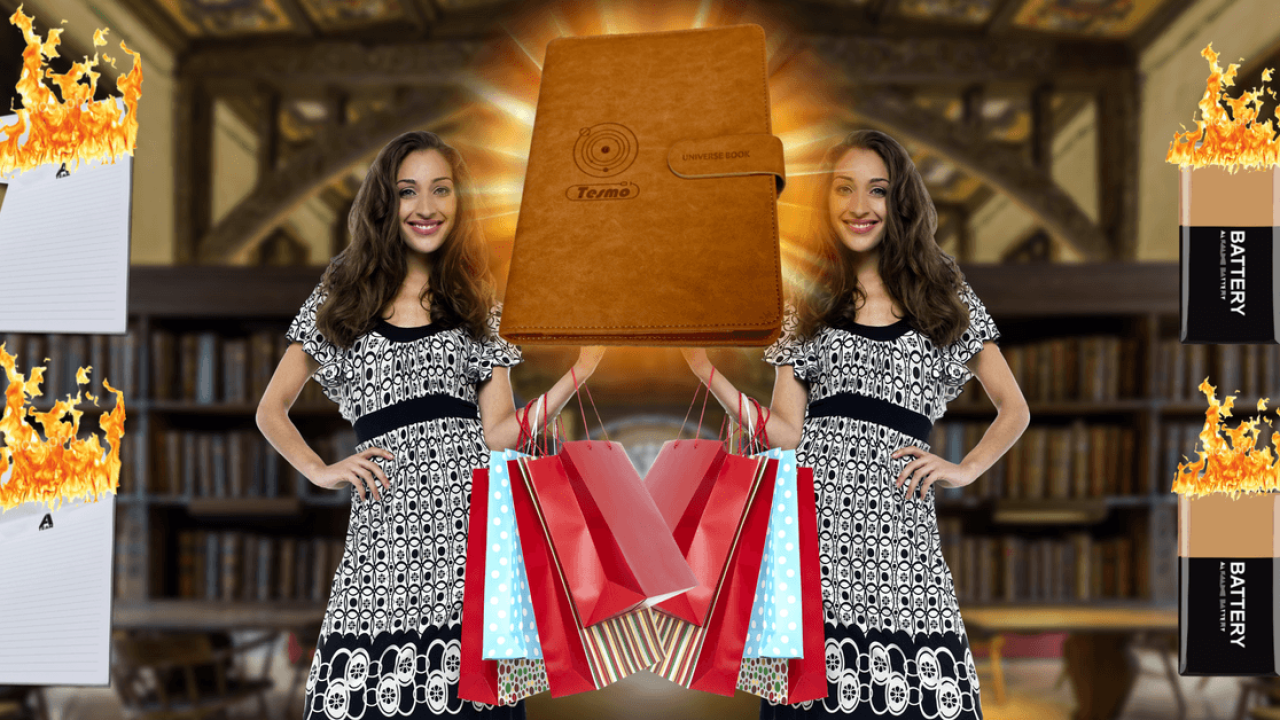 I’m a sucker for stationary, seriously. My house is filled with unused notepads, my bag teems with pens, and, much to the annoyance of everyone around me, I slow down whenever I walk past a pretty-looking office supply store. This, friends, was why I was excited to test the Tesmo Universe Book.

It’s a notebook that – and wrap your noggin around this – also functions as a power bank. For some reason.

It has a range of cables (a micro-USB, Apple lightning, and an adaptor for USB-C) and also features wireless charging for Qi capable devices, such as the iPhone X and the Samsung Galaxy S8. The battery in the Tesmo Universe Book is 8,000 mAh, meaning it should charge an average phone around three times.

Yeah, as an idea, I don’t mind it at all. The prototype we got sent feels pretty good too. It’s covered in a plush-feeling leather and there are three different color options available: brown, grey, and black.

That circular drawing in the middle is where you put your wireless charging device. Honestly though, I’d probably prefer a smaller Tesmo logo and image on there, as it sort of ruins the classy vibe.

Size-wise, the Tesmo holds A5 paper, but has about an inch of material either side of the insert. And, where the rear inside of the planner has charging cables, the front is filled the usual slots you have on these bits of stationary, such as card slots and note pockets. Like this:

Any other info I need?

Well, it comes with a diary-like insert that’s quite self-help-y. You know the ones, with quotes on the pages and places that urge you to write what you’re grateful for. Whether this is a good thing depends entirely on you and how much you value mindfulness. Still, the more I think about it, the more I like the idea of this ‘mood book’ – it’s a much better insert than a plain old diary.

Luckily for the grumpier among us, Tesmo used the standard format for this planners, so getting replacement inserts that are a bit more… practical is easy.

I was joking when I called you a nerd earlier, sorry. I really like stationary too. Might have to buy myself a Tesmo Universe Book

Hold on there, friend. While it’s a cool idea, there are some pretty large design flaws that don’t make it the best notepad I’ve ever used. Especially when it’s going to retail at $129.

First off,  when you’re charging your phone with a cable from the Tesmo, you really don’t have much range of motion. You’re stuck on the upper right of the pad. An extendable cable would be much better.

There’s also an issue with the wireless charging. When I tested it out on a friend’s phone (I’m not fancy enough to own an iPhone X, come on) it worked fine, as long as it was on the front cover of the Tesmo Universe Book.

In other words, you really can’t use the notepad while you’re wireless charging.

There was also an issue with writing on the last pages of the insert. Due to the fact there’s no hard surface between the notepad and the area where the charging cables were stored, my pen regularly dropped into the gaps, making it tricky to, you know, write. Literally just providing a piece of thick cardboard at the back of the notepad would solve this issue.

I can see this being a good gift for the forgetful stationary enthusiast who wants to feel better about themselves. Know someone whose phone always runs out of charge and wants a mindful notepad? The Tesmo Universe Book might solve both.

Still, for $129 I think you can do better. My advice would be to grab yourself an Anker portable charger, like this PowerCore, which has more than twice the capacity of the Tesmo and only costs $50.

And, after that, look at a Midori Traveler’s Notebook. These things are beautiful leather journals you can add inserts too, such as diaries, plain refills, and more. The journal costs about $50 and the inserts hover around the $10 mark. Honestly, you won’t regret it.

Sum the Tesmo up please

It’s cool. I like it. But it has some flaws.

It’s a well-made, premium-feeling product that I enjoyed fiddling about with. I do think the price is a bit high and the company could change up how the charging works though.

Still, while I might not buy it myself, I could imagine it making a cool present.

If you’re interested in finding out more, you can head over here. But, before investing, please do be aware that Kickstarters are always a risk.