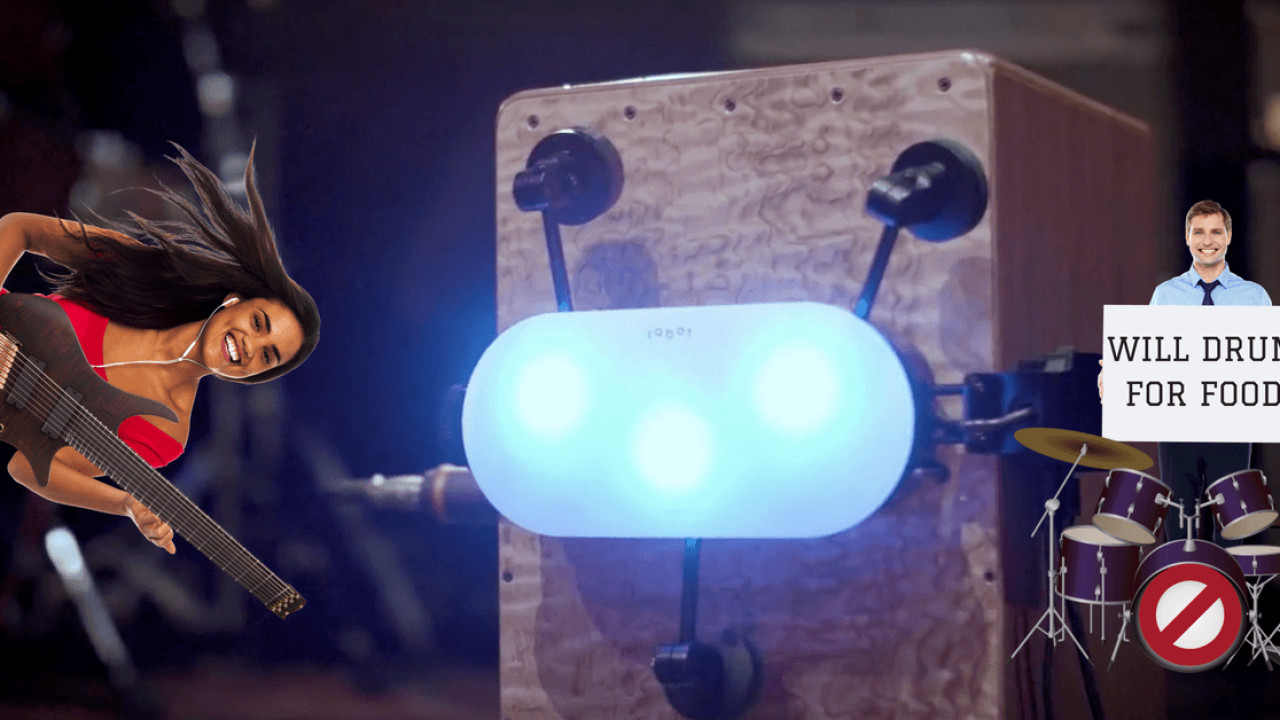 Just when you think you’ve seen it all, someone goes and invents a cajón-playing robot and launches it on Kickstarter. Cabot (which, one assumes, is a portmanteau of cajon and robot) attaches to the percussion instrument and, when connected to a smartphone, blasts out a rhythm of the user’s choosing or creation on the drum.

Also, it looks like the facehugger from Alien if, rather than H. R. Giger, they were designed by Apple. You can see it in action here:

The CEO of the Cabot team, Hideaki Iio, was inspired to create the device so he could, and I quote, “totally enjoy jamming.”

He told me Cabot’s intended market was “solo musicians [or] performers,” so “they can accompany Cabot [on stage] or enjoy a unique jamming experience at home.”

As weird as the device looks, it might actually find a niché. When I had dreams of playing scorching guitar solos on stage (but was really just alone in my bedroom with an out-of-tune guitar), I would’ve loved to practice with Cabot. The thing is, in those days YouTube and cheap speakers didn’t really exist, so finding things to play along with was far, far harder.

In response to this concern, Iio was steadfast, believing that, “there is a difference between sound from speaker and the sound made by playing a real instrument,” like the Cabot does.

It’s a fair(-ish) comment, as seeing someone perform to a backing track removes some of the magic of a gig. With Cabot retailing for around €860 (a figure that is still tentative) though, it’s a substantial investment, especially compared to a drum machine or a piece of software.

A reason Iio quoted for the expense was having seen “many crowdfunding projects set a low price and [fail] to deliver,” something he doesn’t want to happen with the Cabot. I think anyone who has backed a promising campaign and either saw it fail or completely underwhelm should admire that approach.

Despite missing this crowdfunding pitfall, Cabot appears to be walking right into another: shipping dates. The information around this is very vague, with a tentative date of March 2019, dependent on production issues. Hmm.

Anyway, let’s imagine Cabot hits its funding target, ships promptly, and starts entering bedrooms across the globe. When I stepped out of my room and onto (the very, very) small stage, I did so with one of my friends on drums. What would’ve happened to him if I grew up with Cabot? Would he have aimlessly wandered the streets, hitting things not meant to be hit at all?

“Some people see [Cabot] as a replacement of drummers,” Iio said. “This is not our intention and we are not focusing on it. You can control Cabot with foot switch. You don’t control drummers. It’s different experience.”

I can see why Cabot makes sense for some. It could be a fun device to play with, but it’s questionable if the experience is substantially better than a drum machine – especially considering the price difference. These days, my musical ambitions are low enough that I’m happy to just noodle along to YouTube videos, but, if you’re a bit more serious, Cabot might be worth looking into. Until the next crazy musical gadget, at least.

Cabot is on Kickstarter, if you want to contribute, you can do so here.