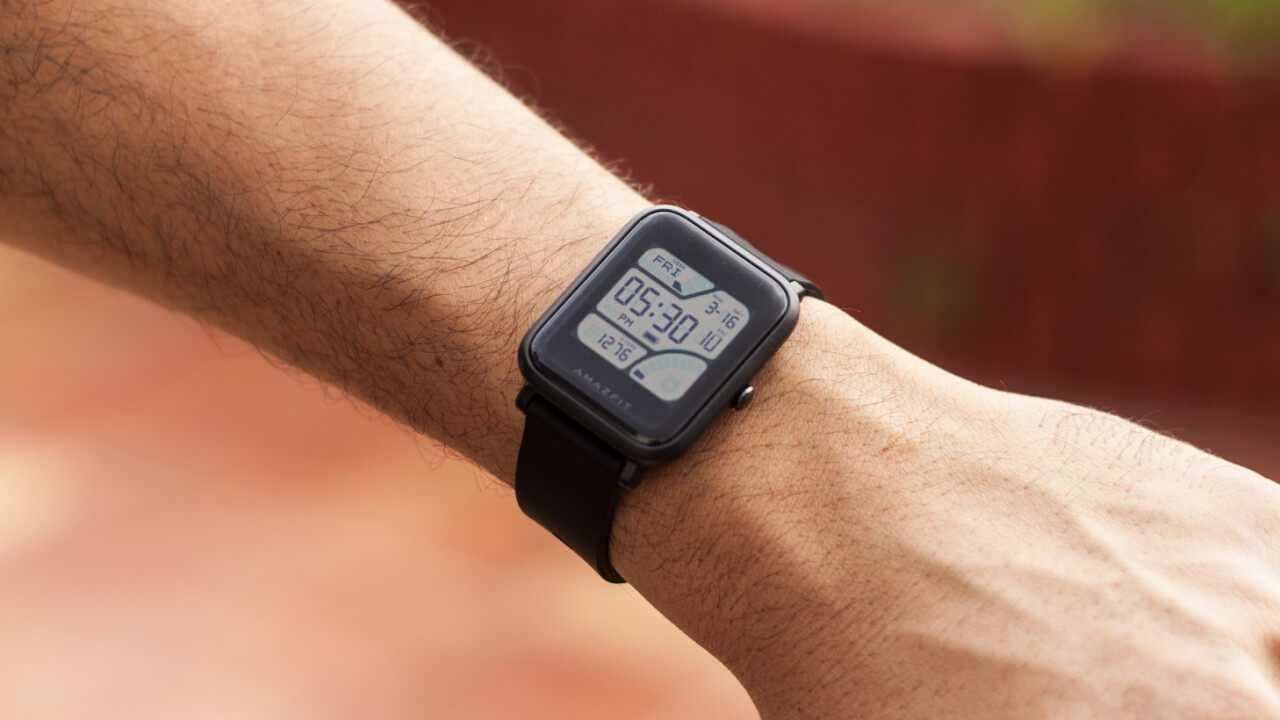 Earlier this year, Amazfit, a brand from Xiaomi’s wearable tech supplier Huami, launched its Bip smartwatch to beat out the competition on price and battery life.

For $100, the Bip brings a large color display, a battery that can keep going for up to 45 days on a single charge, fitness tracking capabilities, and the ability to display notifications from your phone. But how does it compare to similarly priced devices, and other smartwatches? I strapped it on for a few weeks to see if it’s all that.

With its rectangular plastic case, the Bip looks more like a digital watch from the 90s than the slim fitness bands flooding the market these days. That sets it apart from the crowd, while also making it easier to read the time and keep an eye on your activity stats and notifications.

There’s a bit of a bezel surrounding the screen, and then there’s the plastic case around that. My Bip came with a black rubber strap, with quick-release pins that allow for changing straps without tools and within a minute. They don’t make for a particularly premium feel, but the overall design comes together nicely enough if you’re okay with a utilitarian look.

Amazfit kept things real simple on the Bip: there’s a weather view, an alarm, a timer, a compass, a shortcut to your settings, and an activity screen to see how much of a workout you’ve got in through the day.

Interacting with the device requires you to swipe and tap, and the experience is certainly better than on smaller devices, simply because there’s more room for your paws.

However, that’s about all that’s nice about the Bip as a smartwatch. It’s awfully limited, because the proprietary platform doesn’t support an app store or even allow for an official watchface marketplace. You can’t snooze notifications or reply to messages with preset responses, and you can’t control music playback on your phone through it.

That makes it perhaps the most basic smartwatch you can buy – heck, some devices that call themselves fitness trackers also handle notifications. This is essentially the feature phone of smartwatches – and for some, that’s not entirely a bad thing.

While I’m not a huge fan of smartwatches myself, I was in awe of how clever Pebble’s OS was back in the day; it did a great job of organizing phone notifications and other activity info into a timeline, and allowed for plenty of functionality in an interface that didn’t feel like it was cramming too much into a small space.

This isn’t anywhere close, and it certainly isn’t like Wear OS or watchOS. It’s good at simply displaying information, and that helps keep the battery going for far longer than practically any other wearable with a display of this size.

The Bip connects with Xiaomi’s Mi Fit app on your iPhone or Android device via Bluetooth, and beams across a fair bit of data, thanks to its GPS and heart rate tracking capabilities. It also does sleep tracking, and can remind you to meet daily goals that you set in the app.

To that end, it’s actually pretty good. I found the Bip’s step tracking to be fairly accurate; a friend who graciously tested it for me for a couple of days alongside his $150 Garmin VivoSport noted that the Bip was better at tracking actual steps, and disregarded false positives, such as arm motion when brushing your teeth.

However, its heart rate monitoring wasn’t up to the mark; it frequently reported major drops in heart rate while my workout was in full swing, and often recorded significantly lower heart rates than the elliptical at my gym, as well as the VivoSport. That makes this component worthless, and Amazfit would’ve been better off leaving this out: it also chews up a fair bit of battery life.

Speaking of which, the company wasn’t kidding: you really can get a few weeks’ use out of the Bip if you use it only for fitness tracking (with the HR monitor turned off). That means you don’t have to keep its charging cradle handy to juice it up every other day. And even with all its bells and whistles active, you should get at least a week on a charge.

The well-designed app lets you view your activity history, displays your run routes and distances on a map, and even helps you compare your quality of sleep with other users. It can also send your data over to other services like Google Fit. Overall, it surfaces enough data for you to get a comprehensive idea of how your workouts are going over time.

The Bip is a nice enough fitness tracker with a design that you don’t see every day. It’s well-built, with an easy to read display, and its long battery life allows you to wear it on vacation for several days without having to worry about carrying along its proprietary charger.

I’d happily recommend this to folks who run or jog often; it’d also make for a great gift for someone who’s been meaning to get into shape – especially folks who’d appreciate a large display that’s easier on the eyes than slim fitness bands.

However, if you’re in the market for a smartwatch, you can do a whole better if you stretch your budget a bit: Mobvoi’s TicWatch runs Wear OS and comes in at $155; Fossil has a bunch that start at a little over $200. Fitbit has a pretty $200 Versa on sale as well, but it’s rather basic for its asking price.

H/T Rahul Gonsalves and Pratul Kalia for their help with this one.