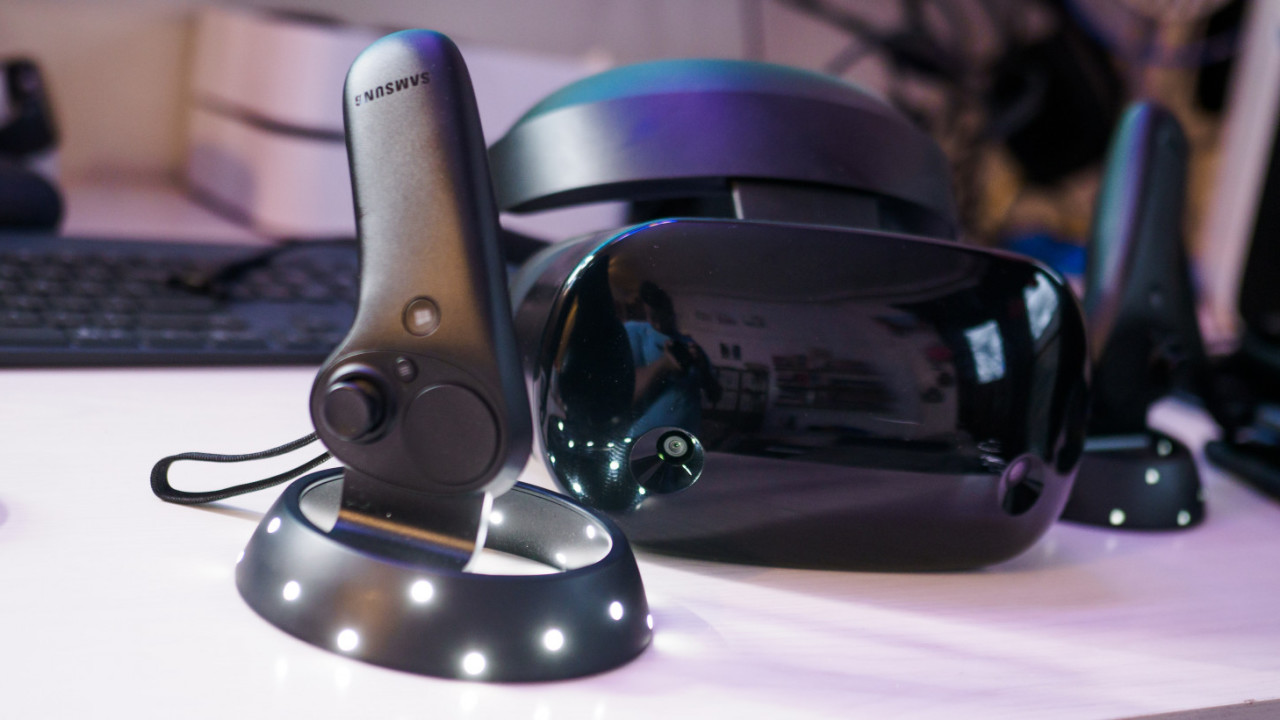 When Microsoft announced its entrance into the VR headset market, its partner products were attractive and relatively inexpensive, but didn’t live up to the Oculus Rift and HTC Vive in terms of pure image quality and specs. Enter Samsung’s HMD Odyssey, a $499 headset that can compete with the best of them.

I’ve been living with the Odyssey for the past couple of months, spending many an hour immersed in Microsoft’s mixed reality world.

The Odyssey’s combination of some of the highest resolutions around and OLED technology makes it one of the more pleasant VR experiences I’ve tried. For comparison, the Oculus Rift and HTC Vive both have 2160 x 1200 resolutions, while the Odyssey runs at 2880 x 1600. There’s a small amount of black smearing during dark scenes with a lot of motion, but that’s a problem OLED tech hasn’t been able to completely work out; I’ll compromise for the improved colors, sharpness and black levels.

The headset itself is super comfortable for short bursts, although the use of pleather means it can get warm during extended play sessions. I also took some issue with the headphones. They sound solid, but I wish I could remove them to more easily use my own headset. More annoyingly, it was difficult to get them to sit comfortably on my ears without finagling for the perfect fit.

Caveats aside, I’ve tried all of the current mixed reality headsets, and though some have advantages in the comfort and price department, the sheer improvement in image quality on Samsung’s headset make it worth the extra cost.

Of course, this would all be naught if the VR experience weren’t up to snuff, but Microsoft’s Mixed Reality portal is a glimpse of the future I want to live in. A somewhat unfinished and occasionally buggy glimpse, but the future nonetheless.

The good starts with the setup experience. As soon as I plugged in the HMD, Microsoft’s Mixed Reality Portal opened. I was prompted to pair the controllers, downloaded a few updates, then calibrated the headset to my room.

The whole process took less than 10 minutes and was surprisingly easy. Because the headset uses 3D mapping technically borrowed from the HoloLens, there was no need for setting up external cameras and extra wires – something I seriously appreciated in my cramped studio apartment.

And if you don’t need the room scale environment – or if you don’t have enough free space – you can ignore the mapping step altogether. The experience was largely similar and I was still able to move around with my feet. I just wasn’t warned when I was about to slam into a wall.

In VR, the mixed reality home replaces the desktop. In the same way the 2D desktop was supposed to be an analog for a physical desk where you might keep documents and folders, the home expands that potential into 3D space.

You can stick mixed reality apps onto any wall, place 3D models all around your home. You can resize these or reorient them to your liking, although I wasn’t able to find a way to stick a screen onto the ceiling. You can even access your desktop within mixed reality, like using an IMAX sized monitor, albeit a very blurry one.

Thanks to a partnership with Steam, you can access SteamVR using a Windows Mixed Reality headset, immediately giving you access to a myriad of titles not available on the Windows Store. It’s in beta, so the experience is still kind of buggy – sometimes it wouldn’t load at all until I restarted my computer. I also noticed sometimes the same titles performed worse on steam than they did with the Mixed Reality portal.

Still, it’s good to see Microsoft working with partners to prevent increasing fragmentation in the VR market. The heart of modern VR is still in gaming, and it’s where the mixed reality experience shines best at the moment.

That being said, using Mixed Reality at regular intervals the past few months helped me appreciate Microsoft’s vision for the future of computing. I work from a small apartment but with mixed reality, I can pretend to work in a giant loft. The possibilities within that virtual space feel endless. There’s just not enough to fill it up with.

It’s almost frustrating to see so much potential stifled by the limits of modern technology. The usual VR caveats still apply: the headset is bulky, resolution is far lower than our eye’s visual fidelity, youre isolated from the rest of the world, and you need to be tethered to a PC.

I want to be able to use a virtual 200-foot monitor for work and watching movies, but the image is too blurry for extended use. I wish I could edit my photos in a virtual environment, but the app support isn’t there. Then there are the occasional disconnects and bugginess from being a first-gen product.

Still, with Samsung’s Odyssey and Microsoft Mixed Reality, I see a glimmer of hope for future. The HMD Odyssey has the best viewing experience I’ve tried so far, and Microsoft took a step forward for accessibility in terms of price and ease-of-use. I might not be able to use my virtual home as a real work and entertainment environment, but for once, that future feels tangible.