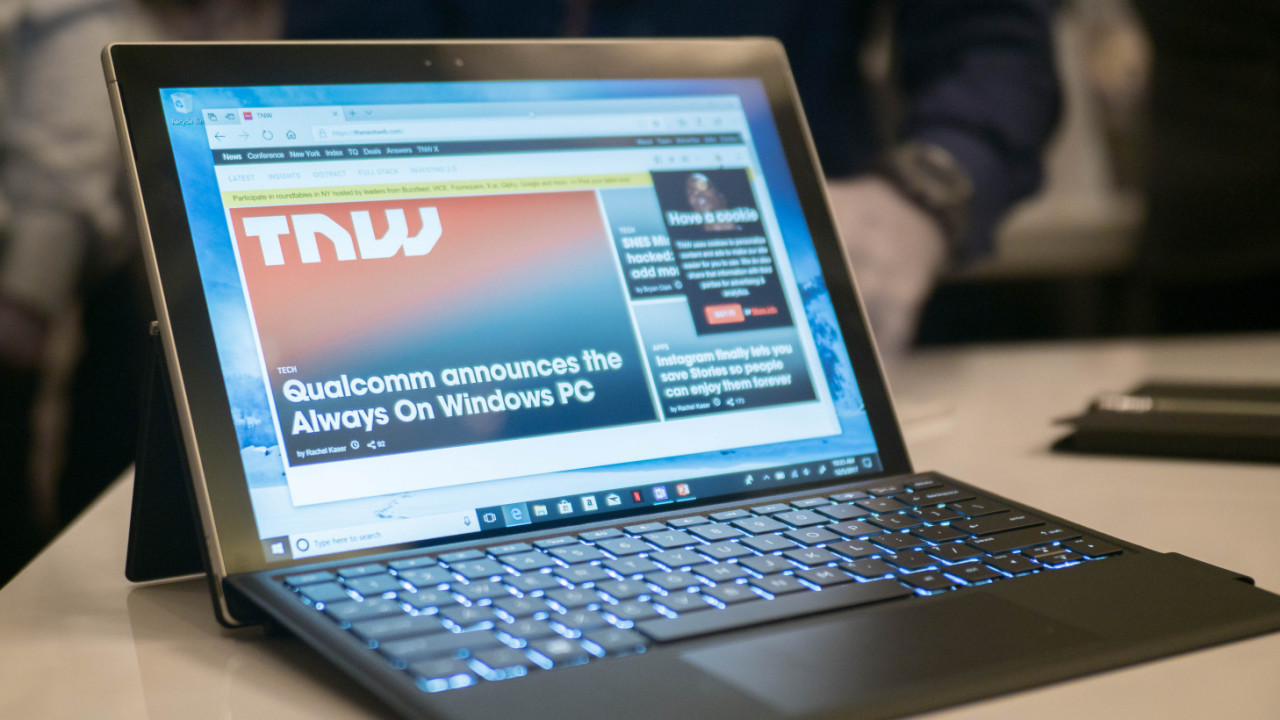 It’s been several months since Microsoft announced it was bringing mobile-style ARM processors to Windows 10 and now we’re finally seeing the fruits of that labor. Say hello the “Always Connected PC,” the first batch of which are powered by Qualcomm processors.

Qualcomm apparently thought I was cool enough to fly me out to its event in Hawaii (disclaimer), where it showed showed off two Windows PCs, the HP Envy X2 and the Asus NovaGo. They’re powered by the Snapdragon 835 – the same chip in the Galaxy S8, Pixel 2, and the vast majority of Android flagships in 2017.

The Envy x2 is very akin to the recent Spectre x2 at first glance. However, it uses a kickstand in the vein of the Huawei Matebook E, integrated into the keyboard cover rather than the tablet itself. That means that, unlike a traditional kickstand, the laptop is fully covered – it’s basically always in a case.

I only had a few minutes with the device, but the hardware felt premium. Typing felt better than most tablet keyboards, perhaps even as good as the Surface Pro, and miles ahead of the iPad Pro. The included pen was smooth with no obvious latency. The 1080p screen isn’t the sharpest around, but colors and contrast were vibrant, and you won’t miss the extra resolution too much on a 12.3-inch display.

Mostly, I was impressed by how thin and light it was, something surely aided by the new chipset. It’s 6.9mm thin and 1.5 lb (HP’s website says 1.21 kg for some reason, but it stated the former on stage). Picking it up without the keyboard portion, it felt more like an iPad and less like a PC stuffed into a tablet form factor. Even with the keyboard attached, it still felt super light.

The device comes with 8GB of RAM and 128GB of storage by default, and the only ports are USB-C and a headphone jack. HP isn’t providing a price quite yet, but considering the Spectre x2 starts at $1,149, we imagine the Envy x2 will start close to the one grand mark. HP has more specs and information here.

Asus’ offering was clearly aimed at the budget market with a starting price of $599, and that somewhat shows in its design. That’s not to say it’s bad – in fact, it feels quite solid – but it doesn’t have the sleekness of a premium ultrabook.

Still, it’s an all metal design with a good screen (100 percent sRGB) and smallish bezels, and the flipping-hinge mechanism felt solid too. I had no immediate complaints about the keyboard and trackpad, and the stylus felt responsive as well. There are two USB-A ports and and HDMI port, but USB-C is disappointingly omitted.

The tablets come with Windows 10 S, meaning you can only run apps from the Microsoft Store by default, but you can upgrade to Windows 10 Pro and run regular Windows apps. However, according to Qualcomm, they will only run Win32 applications if not available through the Windows Store. Software that only comes in a 64 bit version will not work, but most programs generally still include a 32-bit variant.

It also remains to be see how much of a performance hit Win32 programs will see when emulated to run on ARM chipsets. Until we can test how they perform with legacy software these laptops might actually be best left to running Windows Store apps or used only as a secondary laptop. The last thing you want is to have to use some crucial software for work or school only to find out it doesn’t work on your brand new laptop.

All that being said, performance on Windows S felt surprisingly good, with quick loading times and smooth animations – smoother than I’ve seen from many budget laptops. And this is just the beginning; as ARM processors become more popular in Windows, developers will be able to further optimize their applications.

Really though, the story of Qualcomm-powered PCs is all about the battery life and connectivity. Unfortunately thhose aren’t things we can test in a brief hands on, but even if HP and Asus only manage to squeze half of the claimed 20-22 hour battery life, you’d still be outlasting pretty much every other laptop currently on the market.

As Qualcomm put it, instead of measuring our battery life in hours, we’ll think about it in terms of days or even weeks. I would no longer have to carry my laptop charger with me “just in case.”

Conversely, PC manufacturers could use the extra efficiency to reduce PC sizes significantly while still providing solid battery life. I don’t think laptops need to get any thinner, but manufactures will be able to experiment with lighter, smaller form factors thanks to the increased efficiency and smaller chipset size of ARM processers. And as more entry-level laptops adopt Qualcomm chips and the world moves to 5G, we’ll likely see the majority of computers come with wireless internet connectivity, not just a handful of models.

We’ll have to see how the laptops perform in the long term once we get our hands on devices in 2018. If app compatibility doesn’t become a pain point and battery life holds up to scrutiny, Qualcomm’s processors – and other ARM chips, once they join in on the fun – could actually change the way we use our PCs. I’m looking forward to the day we can get this type of battery life from higher-performance chipsets too.