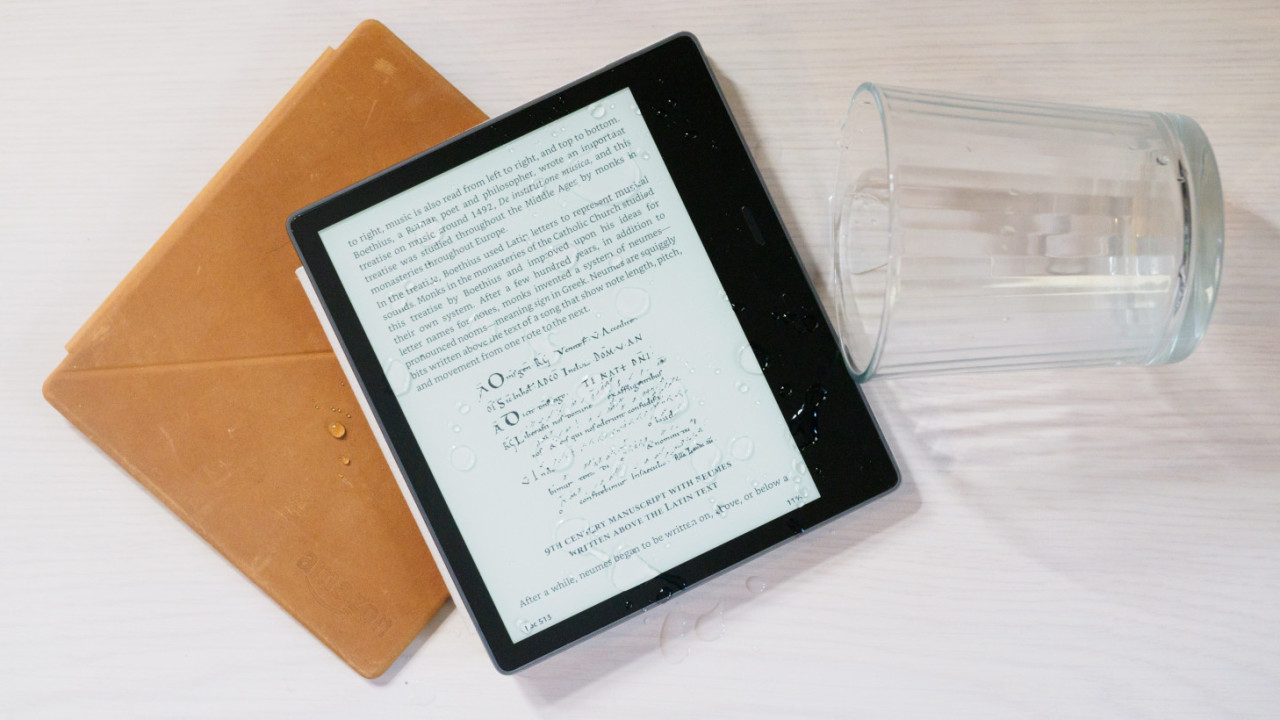 TL;DR Amazon’s new $249 Kindle Oasis is waterproof and comes with a bigger screen. If those things matter to you, you should get one.

I could pretty much end this review there, and you’d know most of what you need to know about the new Oasis. Like last year’s model, it’s a luxury indulgence with superior build quality and design compared to its cheaper siblings. Unlike last year’s model, you’re getting a tangible improvement over Amazon’s cheaper Voyage and Paperwhite models.

It all starts with that 7-inch screen. That extra inch over 6-inch display on every other Kindle – except the ill-fated DX – may not sound like much, but it goes a long way towards making the Oasis feel more like a proper book.

I do most of my reading on my phone nowadays, and my daily drivers in the past few months have all had 6-inch screens or larger. Though their tall aspect ratios mean they have a smaller overall area than a regular Kindle, it was close enough I didn’t feel like I was missing out no much. The new Oasis, on the other hand, feels a bit more like a normal book. I still wish Amazon sold a size closer to an actual paperback, but I’ll take what I can get.

The Oasis has the fastest refresh rate of any e-ink display I’ve tried, and though Amazon doesn’t provide exact figures, it’s speedy enough that I rarely felt inhibited. For basic interactions like navigating the UI, swiping pages, and rotating the screen, and even typing, it’s just a little slower than using a regular touchscreen, other than a quick flash of black when the Kindle needs to refresh the entire panel. That said, you still can’t scroll smoothly, but that’s to be expected.

It’s nice to see how much e-ink technology has evolved over the years. At 300 dpi and such a relatively large screen, it’s definitely the best time I’ve had reading on an e-ink display. The panel is not quite as white as a sheet of paper is in low light, but for the most part, the fill light does a good job of helping it emulate the contrast of real book. The lighting is also perfectly even on my review unit, unlike some other Kindles I’ve tried.

As with last year’s model, Amazon is using a lopsided design, which helps you read comfortably using one hand. It’s a bit annoying having to flip the device over for a hearty left-handed grip, but overall I prefer the design to the other Kindles – in part because it actually keeps satisfyingly clicky page turn buttons.

Thankfully, Amazon has abandoned the battery case from last year. While it was a somewhat cool concept to extend battery life on a slim and light device, it was a bit of overkill on a Kindle. Besides, I much prefer the new cases which can fold to use as a kickstand when your hands are occupied. My one complaint is that the magnets on the cases are weaker than I’d like, making it pretty easy for the case to come off accidentally if you’re not being careful.

I’ve only had the device for a bit less than a week, which is not enough time to test its battery life, but you can expect similar performance to other Kindles. Amazon rates it at six weeks with wireless connectivity turned off and an average of 30 minutes of reading per day. Considering my Wi-Fi + LTE model was constantly connected and it’s only lost about a third of a charge since I received it, I’d say it’s safe to expect at least a week or two for heavy users.

But that does bring me to a small quibble: the Kindle Oasis uses a micro USB charging port, even though it’s late 2017. I know I’ll only have to charge it a couple of times a month, but there’s no reason Amazon shouldn’t be using USB-C at those stage on a device that starts at $250. It means I need to carry around an unnecessary extra cable if I want to take my Kindle on vacation and forgot to charge it at home. It also would’ve been nice to at least be able to use USB-C headphones or a dongle for Audible and music connectivity, but as it stands, Bluetooth is your only option.

Oh yeah, then there’s the IPX8 waterproofing – the reason you probably want the new Oasis in the first place. I didn’t exactly torture test it, but I ran it under a faucet for a few minutes and dropped it in my sink. It still works, so as far as I’m concerned, that’s good enough. IP ratings are technically done with fresh water, but Amazon says the Oassis was designed to survive a dunk in a pool or bathtub, as well as a splash of saltwater at the beach. I wouldn’t recommend actually reading underwater.

$250 is a lot of moolah to spend on an e-reader, but whether or not it’s worth it depends on how avid of a reader you are. For many people the Kindle Paperwhite will provide the same basic reading experience for just $120. But for those willing to spend more, the larger display and waterproofing are enough reason to fork out the Benjamins on their own. The premium design is just a nice bonus.