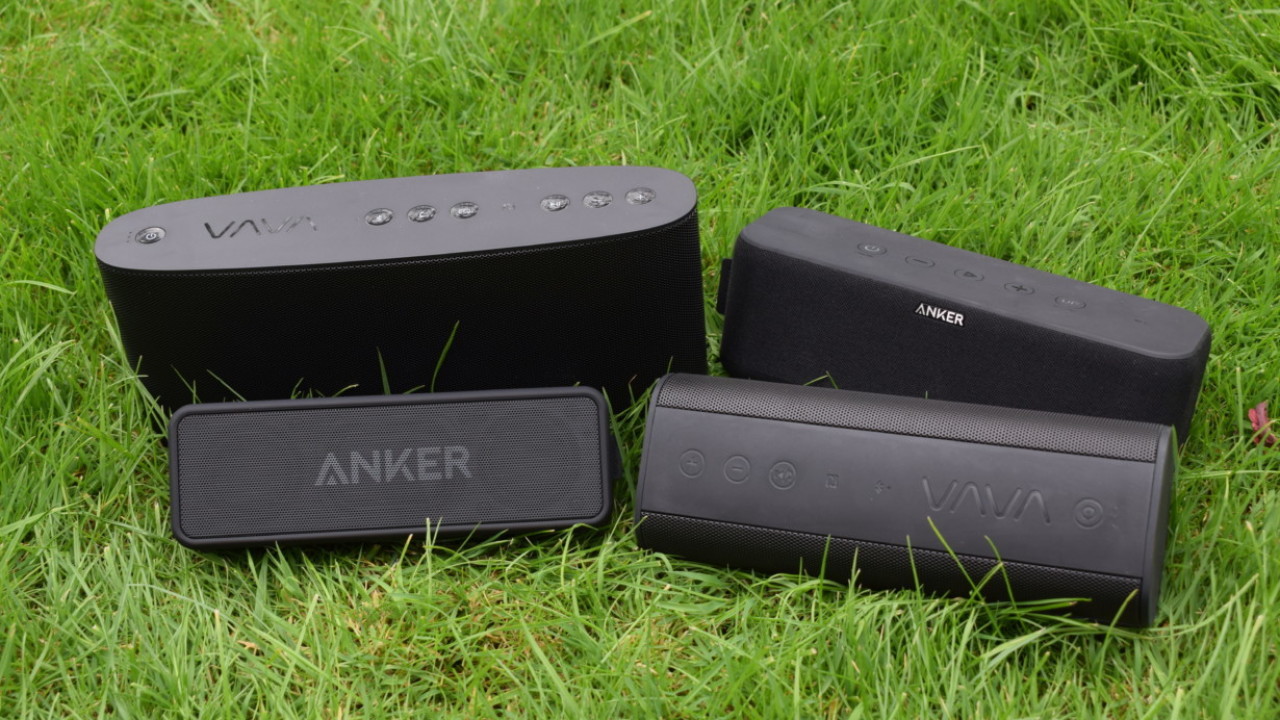 Look outside. See that brightly burning ball of gas, hovering above our heads? That’s the sun. It won’t be around much anymore; summer is almost over, bringing with it a malaise of rain, early sunsets, and seasonal affective disorder.

So, enjoy it. Go outside and get some vitamin D. Walk to the park or the beach, and take along a six-pack of beer with you. And if you want to chill out with some tunes, but don’t want to splurge on an ultra-expensive Bluetooth speaker set, perhaps consider one of the following.

This round-up is going to be a little unusual, as it’s going to focus on two brands in particular: Vava and Anker.

You probably already know Anker. It makes a lot of great, cheap tech. My bag is stuffed with its USB cables and chargers. They also make audio equipment, like headphones and speakers. In this whistle-stop roundup, we’re going to take a look at the SoundCore 2 and the SoundCore Boost 2. Both products came out earlier this summer.

And then there’s Vava. It’s okay if you’re unfamiliar with it, as as it’s perhaps not as well known as Anker, and available in fewer markets. Its products are more expensive, but they also come with a slightly more premium bent. We’re going to take a gander at the Vava Voom 21, and the Vava Voom 20.

And no, I have no idea how Vava hasn’t been sued into the stone age by Citroën.

I figured it makes sense if we start with the cheapest item, and then work our way up. That means we’re starting off with Anker’s SoundCore 2, which currently retails on Amazon at $39 (down from its usual price of $89.90).

The SoundCore 2 is the most diminutive speaker on our list, and although not really pocketable, it easily fits into a satchel or handbag. This tiny footprint conceals a 24-hour battery, which will outlast even the most raucous parties.

Of all the speakers I looked at, the SoundCore 2 felt the most rugged (with the VAVA VOOM 20 closely following). It’s IP5 rated, which makes it ideal for trips to the pool and the beach. It’s clad entirely in rubber, which suggests that it’ll be able to withstand even the clutziest of owners.

Lift the device’s rubber flap, and you get the typical connectivity speaker ports. There’s a MicroUSB socket for charging, as well as an AUX in, should you be fortunate enough to have a phone with a headphone jack in 2017.

Sound quality was pretty solid. I guess its biggest weakness is the ability to project volume; when using it in my home office, it gave presence to whimpering acoustic-folk artists, like William Fitzsimmons. This just doesn’t translate well to outdoor environments, where there’s greater ambient noise.

As someone whose tastes gravitate towards depressed, bearded singer-songwriters, the SoundCore 2’s distinct lack of ‘oomph’ when it comes to bass isn’t an issue. But otherwise, be warned; it disappoints in this regard. I tried it out with one of the bass-heavier tracks from Aussie folk-rockers Camp Cope, and… yeah… Not great.

Well, it matches it ounce-for-ounce in certain areas. Like the SoundCore, it’s IP5 rated, making it able to survive splashes (and perhaps the occasional soak).

Like the SoundCore, it feels rugged, although admittedly VAVA went less crazy with the rubber cladding. Ports are concealed behind a rubber tab that you’ve got to peel back, and include a MicroUSB socket for charging and AUX in. It also packs a USB port, because the speaker doubles as a power bank (more on that later).

And in certain areas, it surpasses it.

Sound quality was pretty stellar, particularly in the bass department. Listening to some Gogo Penguin, the bass felt more pronounced than it did on the SoundCore 2. This was particularly observable in tracks like “Branches Break”.

Treble was also pretty well-balanced, with Julien Baker’s aching vocals resonating clearly above the twang of her electric guitar. And when cranked to its maximum volume, it didn’t become distorted. I really liked this.

The VAVA Voom 20 offers more connectivity choices, too. In addition to AUX and Bluetooth, it also throws NFC into the ring.

That said, it’s not for everyone.

While it’s only moderately bigger than the SoundCore 2, it’s a lot heavier, and I can see why it might be a drag carrying this around in a purse.

Battery life isn’t as enduring as the SoundCore 2, with Vava advertising a paltry 8-hours. Should you decide to charge one of your devices with it, you can expect to cut this down even further.

The Anker SoundCore Boost is the bigger brother of the SoundCore 2. Literally, it’s bigger in every way, especially in the price tag, retailing at $79.99 (usually $89.99)

It packs the usual suspects – at least for its price range. It’s got NFC and USB-charging, as well as an AUX port. It’s rated to IP5, and although feels less solid than the SoundCore 2, it’s got enough rubber to make me think it could survive a drop or two.

It also packs a built-in microphone, allowing you to take calls without having to pick up your handset

And did I mention it’s loud? Listening to some GoGo Penguin in my room on a medium-high volume, and I could literally feel the floor vibrate, thanks to its superb bass.

I used it outside, and it simply soared over the cacophony of people and cars, making it ideal for al fresco music appreciation.

As a side note, it comes with a BassUp feature which (duh) augments the bass attributes. This didn’t feel particularly noticeable, and I didn’t feel the need to have it switched on.

Unfortunately, it comes with an Achilles heel – or rather, an Achilles treble. It just feels flat and mediocre, taking the shine away from anthemic punk tracks, likes those from The Smith Street Band, and maudlin acoustic shoegazes from Elliot Smith alike.

I guess what makes the VAVA Voom 21 so unusual is that it feels less like a portable speaker, and more like a speaker that can be portable, should you so wish. Having played around with it for some length, though, I don’t feel like parks and poolsides are its native habitat.

That’s because it’s big and heavy. It’s a bit too big to throw into a satchel or handbag. You wouldn’t want to throw it into a backpack and have it bang against your laptop either, as it’s not rubberized like the other units I looked at.

And while you can charge it via its built-in USB port, it also comes with a 15-volt DC plug, which you can use to plug it into the mains. Ultimately, the VAVA Voom 21 feels better suited to the kitchen, or a living room.

It comes with a meaty 6,700 mAh battery – the biggest of all the devices we’ve looked at. Unfortunately though, life is capped at roughly 10 hours.

That’s hardly a surprise, as it comes with an ability to project volume unlike any of the devices we’ve looked at. It stood tall both within the house, and on a trip to the park, which is tragic considering its form-factor feels so ill-suited to such jaunts.

Inside the metal chassis of the VAVA Voom 21 is a 20W sound system, consisting of a 10W subwoofer and two 5W drivers. These produced clear and delightful treble, even when I cranked the volume to its ear-splitting maximum. Bass was prominent, but nowhere near as good as the SoundCore 2.

Unlike the other contenders, the VAVA Voom 21 has a ‘listening mode’ button, which lets you cycle between three different audio presets. There’s Standard, Classic, and Surround.

Ultimately, these felt a bit like a white elephant, and I spent my time predominantly listening on standard.

Everyone gets a participation trophy

I thought long-and-hard about this. Ultimately, I don’t want to say that one speaker is objectively the best, because I strongly feel they all excel in different areas.

The SoundCore 2 and VAVA Voom 20 both felt the most rugged. Next time I go to the beach or pool, one of these will likely accompany me.

I felt that the VAVA Voom 20 inched the SoundCore 2 when it came to sound quality and volume. That said, if battery life and portability are your biggest concern, stick to the Anker Soundcore 2.

In terms of overall sound quality, I found myself leaning to the VAVA Voom 21 and VAVA Voom 20, although I’ll concede the SoundCore Boost has significantly better bass than anything I played around with.

My favorite overall was the VAVA Voom 21. It’s gorgeous and loud, and I want to keep it in my kitchen. It excelled in all facets of listening – from mopey folk tracks, to bass-heavy jazz, to podcasts and phone calls.

That said, would I take it to the park with me? Hell no. It’s just way too big and bulky and metallic.

This wasn’t meant to be an exhaustive list of Bluetooth speakers under $100. I just wanted to spotlight two devices from two compelling rival manufacturers, and both came out rather well.

That said, there are others worthy of our attention. My colleague Abhimanyu recently raved about Lofree’s gorgeous Poison speaker. At $70, it fits into this price point, and you should read his review. I’ve also heard good things about the JBL Flip 3.

If you feel we’ve missed any out, let me know in the comments below, and we’ll have a gander.