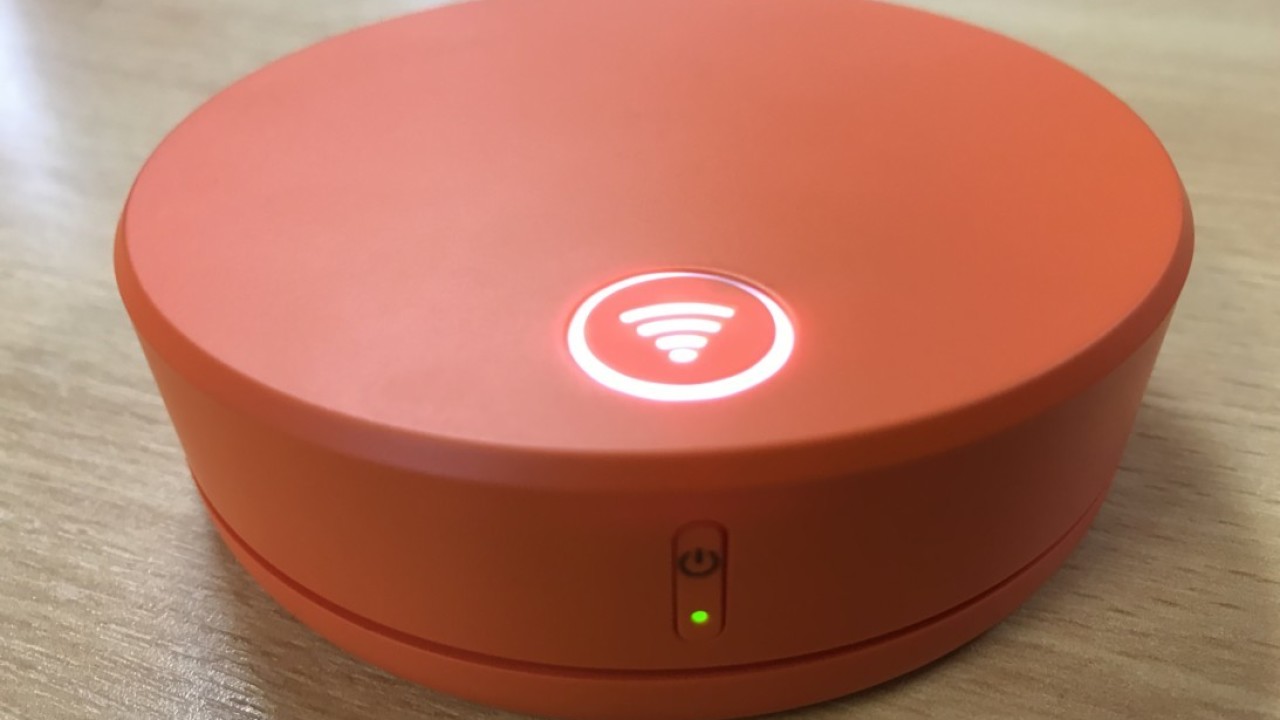 Solis is the latest travel Wi-Fi hotspot from Skyroam. The premise behind it is simple; when you’re abroad, rather pay through the nose for Internet access, you pay a single flat $8 fee for 24 hours’ access. The device works in over 100 countries, including the US, Israel, most of Europe, and Australia.

I’ve owned the original Skyroam device since 2014, and it’s long been a constituent part of my “go bag,” having saved me a huge amount on roaming charges over the years. And the latest update improves on the previous offering, bringing to the table faster LTE internet, plus the ability to charge your other devices.

I spent the past week playing around with it. It’s a solid product, and although I still think it deserves pride of place in your travel luggage, I can’t help but think its value proposition isn’t as clear as when the original first launched, way back in 2014.

Hands on with the device

For whatever reason, the official color of Skyroam is a garish “high-visibility jacket” orange. The original looked a bit like a wedge of cheese, while the Solis is a thick orange disk, as demonstrated in the above video. Suffice to say, it’s not about to win any beauty awards, although you’d be hard pressed to lose it on a dark night.

When you first use the Skyroam Solis, you have to twist open the device and remove some contacts from the battery. Forget to do this, and the Solis won’t work. This isn’t technically difficult, although it’s a bit of an effort. Just imagine the toughest jar of pickles you’ve ever opened, and multiply that by ten.

Unlike the original Skyroam, the Solis is a much simpler product. There’s no touchscreen or buttons. To manage the device, just connect to the hotspot and you’ll be taken to a capture page. Here, you can see how much battery life is left, and how many day passes you’ve got left on your account. If you’ve ran out, it also lets you purchase more. 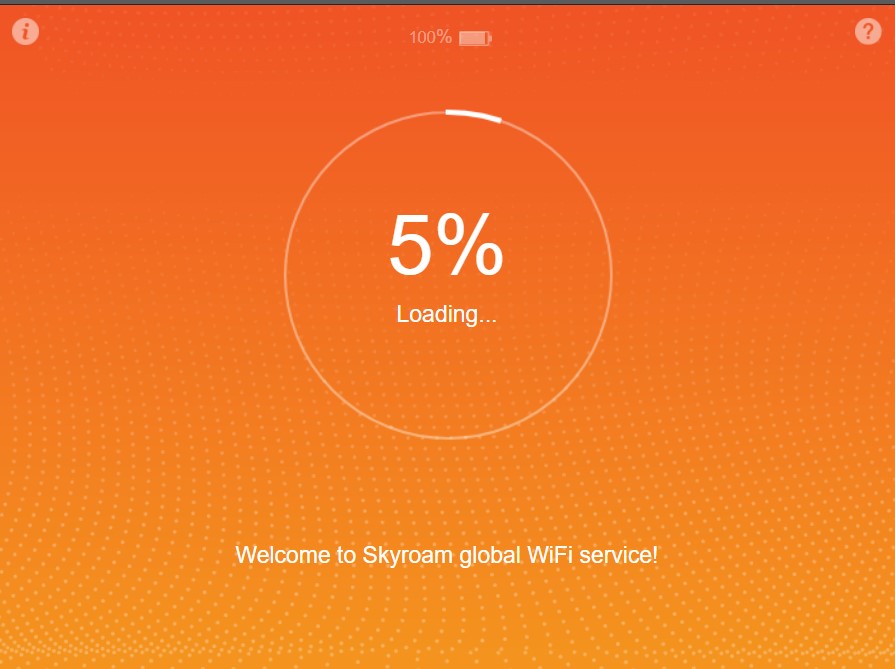 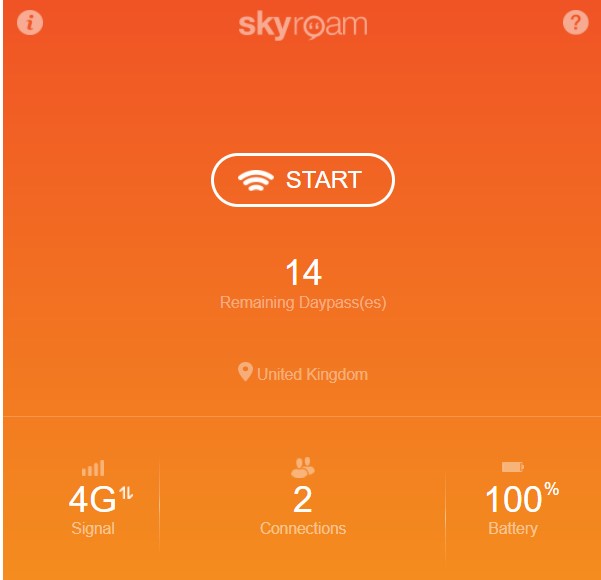 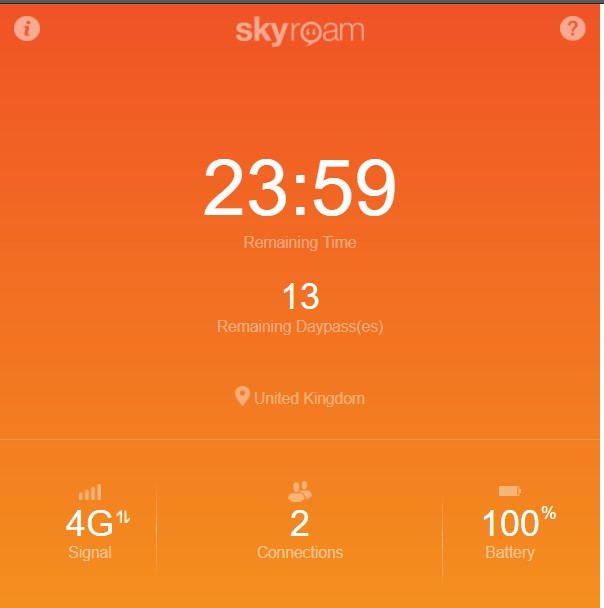 Annoyingly, it’s not particularly well formatted for desktop browsers, although I suspect that’s because Skyroam expects people to use it predominantly on their mobile devices, as demonstrated by its usage policies. More on that later.

The Solis comes with a USB-C port, which is used for charging. It also comes with a USB-C dongle, should you wish to charge your phone or tablet. Although, as pointed out to me by a Skyroam representative, this comes at the expense of Wi-Fi time, as the hotspot and powerbank functionality all shares the same power reservoir.

In terms of battery life, it comes with a 6,000 mAh battery. This will give you about 14 hours of internet access, although this will vary depending on how many devices are connected, and how heavily it’s being used. I connected my laptop and iPhone to it, and after two hours of constant use (mostly consisting of Twitter and Spotify), it still had 93-percent of juice left. The Solaris lets you connect five devices simultaneously, making it great for couples and families, as well as those who hoard gadgets.

Speeds were solid, although as you’d expect, they varied massively. I checked speedtest.net from several different locations to get a bigger picture. These ranged from leafy, quiet suburbs in the middle of the working day, to crowded city centers.

Latency was pretty solid, hovering around the 40ms mark. There was a greater spread between download and upload speeds. At its slowest, I got about 9Mbps down, while elsewhere I saw speeds as high as 42.25 Mbps. Upload speeds, however, were consistently good.

This matters less than you think though. If you use more than 500mb in a 24-hour period, Skyroam throttles your connection to 2.5G speeds, which are scarcely better than dial-up. So, forget about torrenting the latest Game of Thrones on your next business trip, or streaming hours of HD video. It’s clear that Skyroam intend the Solis to be used for light browsing, emailing, and social media.

The Skyroam Solis is an obvious improvement on the previous model. Battery life feels improved, and fast 4G LTE internet is a welcome addition. It’s easy to use, and well-built (as was the original, having survived being drenched in several pints of beer). In terms of reliability, I honestly can’t fault it. And it’s way cheaper than racking up a huge roaming bill. On that basis, I’d recommend it

That said, I kinda feel like its raison d’etre is less clear in 2017.

If you’ve got a phone from the EU, and travel mostly within the European Union, then you already get free roaming. There’s no need to purchase a separate device, as well as pay $8 per day.

Crucially, more and more mobile providers are offering inclusive international roaming as part of their plans. In the UK, for example, Three’s Feel At Home, which lets you use your data, SMS, and voice allowances in over 30 different countries — including the U.S., Israel, and Australia. Moreover, certain T-Mobile USA plans offer free and unlimited 2G data, in over 140 countries. There are similar offerings in Australia, and other European countries.

Put simply, the offer of unlimited international data isn’t as alluring — or as rare — as it used to be.

I’m also not convinced about the portable charging capabilities of the Solis. It just feels a bit like a white elephant; nice to have in principle, but doesn’t really work out in practice.

As mentioned, it only has a 6,000 mAh capacity. You won’t get many charges out of that, and as I said earlier, this comes at the expense of the Wi-Fi longevity. It also only has one USB port, and the included USB-C adaptor is easily lost, as demonstrated by the fact that I’ve… already lost it.

In the interest of fairness, a Skyroam representative says that a future software update will unlock Bluetooth and GPS functionalities, as well as a programmable smart button. While details on that are pretty limited, I’d be interested in how that changes the value proposition of the device.

If you’re still tempted, you can pick up the Skyroam Solis from today. It retails at $149, and can be picked up from the Skyroam store, as well as Amazon. The company also plans to make it available to rent from vending machines in several airports, including San Francisco, Oakland, Atlanta, and Houston.