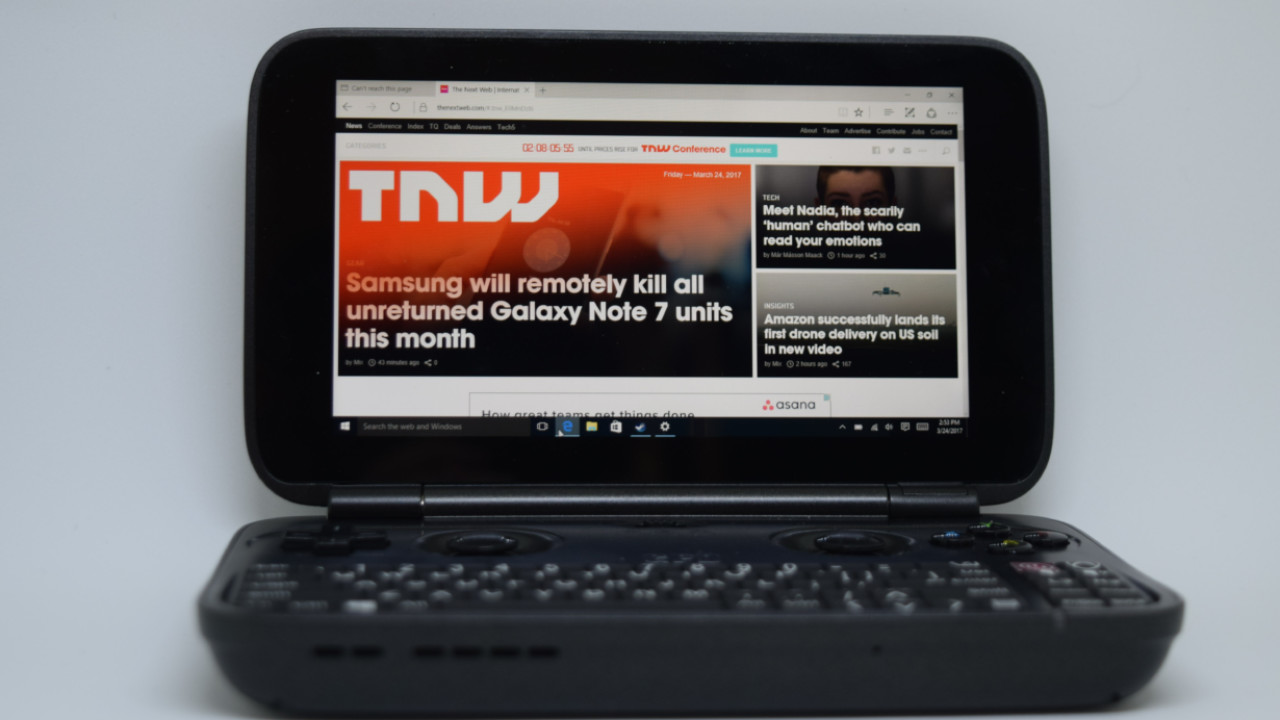 There are a few exceptions (most notably the Razer Blade), but most PC gaming laptops are huge, hulking behemoths. Carry one in your rucksack for any length of time, and you’re all-but-guaranteed to have the same back problems as a 75-year old former coal miner.

I bring this up simply to contrast it to the GPD Win, which is the subject of this review. Put simply, this is the smallest (and, dare I say, most unabashedly bonkers) PC gaming machine I’ve ever laid hands on.

The GPD Win boasts a 5.5-inch screen, and occupies roughly the same footprint as an old-school Nintendo DS. It’s distinctly pocketable, and when you lift open the clamshell lid, you expose a full QWERTY keyboard, and a controller system that’s distinctly reminiscent of the Xbox’s. Oh, and did I mention it can run Skyrim?

Hands on with the GPD Win

If you haven’t heard of the GPD Win before, that’s okay. It’s hardly a household name when it comes to gaming.

Without boring you with the details, the idea came from a team based in Shenzhen, China, who had the bright idea to create an ultra-ultraportable laptop that could still handle AAA-releases – albeit with some compromises when it comes to resolution and detail. One ridiculously successful IndieGoGo campaign later (it eventually raised 535 percent of its original goal), and here we are.

So, let’s talk about specs for a bit. The GPD Win packs the following:

If you’re not exactly hopping about those specifications, remember that this is a device designed to be used on the move, and as a result places an emphasis on cautious power consumption and portability.

One thing I didn’t mention is the dedicated gamepad controls. This needs a bit of explaining.

Given that WASD has been the default standard for movement in PC games since the late 1990’s, you can remap these buttons to something more useful without encountering any real problems.

Both sets of buttons felt solid and responsive. While certainly not as ‘clicky’ as the buttons on an Xbox controller, they’re not far off.

Then there are two joysticks, made by Japanese firm ALPS Electric. These were delightfully easy to grip, and felt tactile and responsive.

The right stick is used to control the mouse. For day-to-day tasks that didn’t involve gaming, I found this to be a little sluggish, and even a little imprecise. Hitting small things – like the ‘X’ icon to close a window – was a bit of a struggle.

I admit, I haven’t used the left joystick much. That’s because, for a reason which I can’t really understand, it’s mapped as a scroll wheel.

This is great if you’re playing a shooter and you want a quick way to traverse through your arsenal, as many games allow you to switch weapons though the scroll wheel. But my brain instinctively though that it would be used for movement, and it was a bit of a disappointment to find out that wasn’t the case.

It’s weird how much these buttons contrasted. Both L1 and R1 sat at the corner of the device, and are pretty tactile and responsive.

But I can’t express enough how terrible I found the L2 and R2 buttons, both of which can be found at the back of the device. Not only did each of these have a huge amount of travel time – which resulted in either missed- or late-presses – but they were just so… squishy.

The frustrating thing is that because the device is so small, you’ll inevitably end up using those keys, as most adult-sized hands are too big to comfortably grip the L1 and R2 buttons.

So, let’s talk about how the diminutive device handles games. Although the GPD Win certainly has the appearance of something that’s weedy and underpowered, looks can be deceiving, and the device was able to handle most titles I threw in its direction. 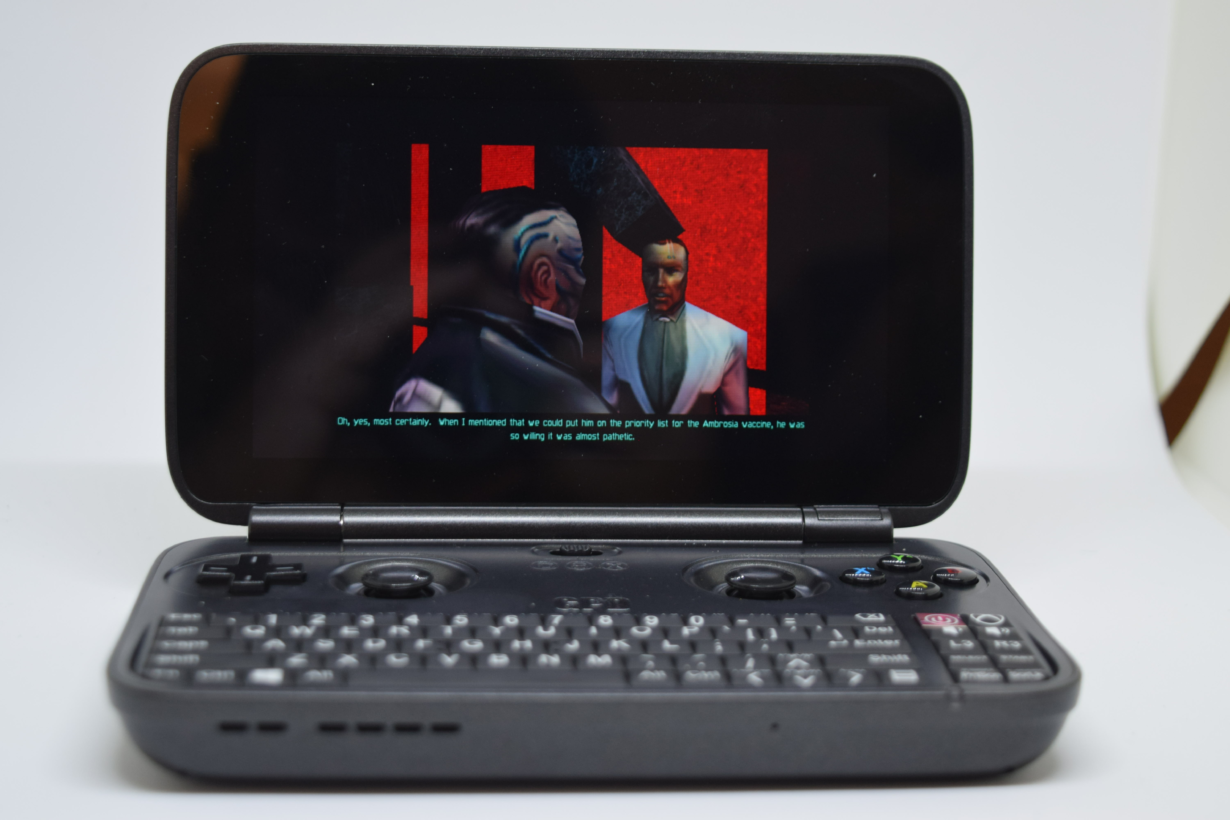 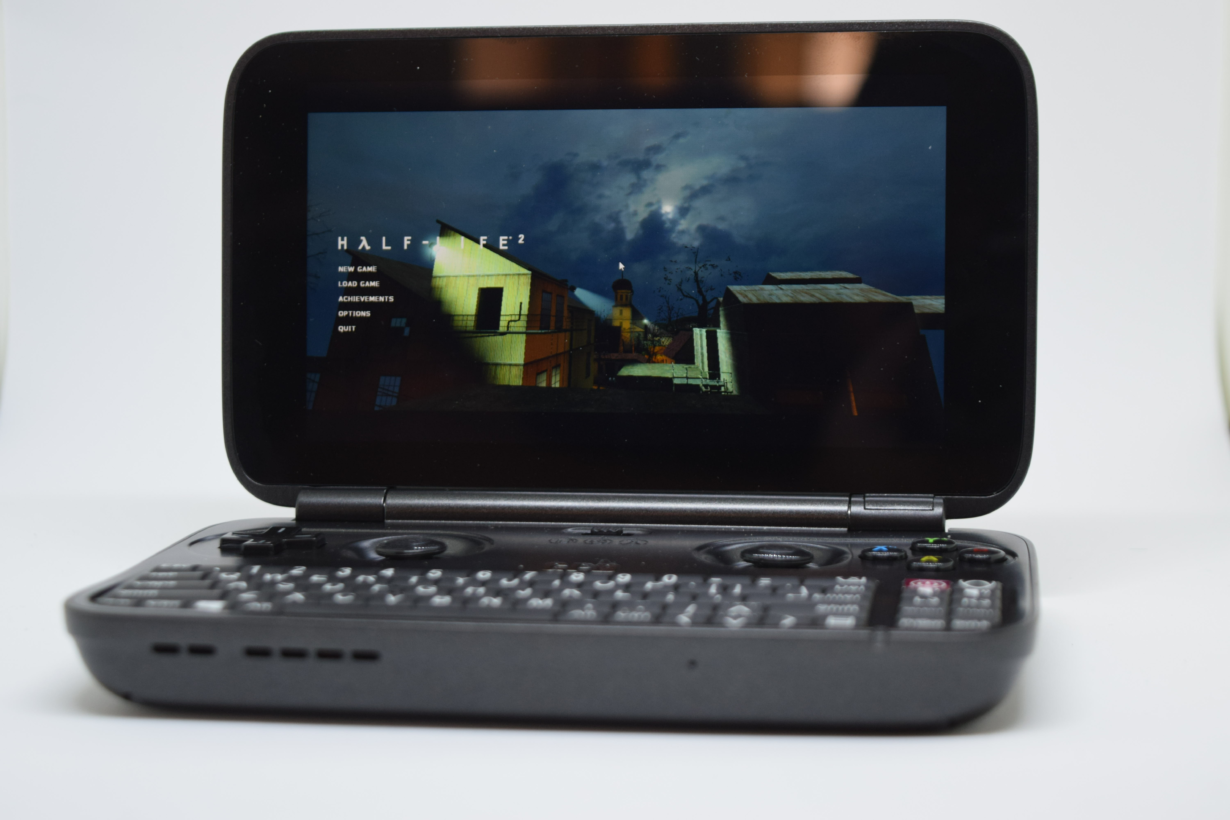 Other users have reportedly had great success with more modern games, like Fallout: New Vegas, The Elder Scrolls: Skyrim, Alien Isolation, and even Goat Simulator.

One of the first things I noticed was how gameplay wasn’t particularly hampered by the fact that the device is tiny. When you think about it, it’s crazy how effortlessly games can scale across different form-factors – from 5.5-inch laptops like the GPD Win, to 12-inch MacBooks, to ginormous LCD TVs.

But I will confess, I did notice the strategies I adopted with several games changed, as I was no longer in my ‘comfort zone’.

Take, for example, the original Deus Ex. This game starts at New York’s Liberty Island, which has been occupied by a terrorist force called the NSF. You play the character of JC Denton, who works for UNATCO – the United Nations Anti-Terrorist Coalition.

Once you land, your brother (who works for the same agency) will run up to you and provide you with a secondary weapon – either a sniper rifle, a rocket launcher, or a crossbow. But I figured that if you run past him into enemy territory, he will give chase. When the enemy NPCs engage him in combat, he’ll swiftly eliminate all of them, essentially doing most of the work for you.

Because I wasn’t particularly familiar with the device, and my muscle memory wasn’t really built up for it, I looked for shortcuts. I avoided secondary quests, and I depended more on stealth to get the job done. If I could take out an adversary from a distance with a sniper rifle, I would.

As a perennial optimist, I’m inclined to look on this as a good thing, as it gave me new perspectives on games I was already deeply familiar with.

Let’s talk about performance for a little bit. Although I played several games, the ones I spent the most time on were the ones mentioned above. It helps that they are amongst some of the iconic games of all time (excluding The Walking Dead: Season Two which, although is definitely a great game, isn’t exactly what you could call iconic).

Every game I tried worked without any stutter. Even in the most ferocious fight scenes, the GPD Win soldiered on, with no perceptible lag. Obviously though, it wasn’t like I was playing them on the highest graphical settings. You could charitably describe my config for Modern Warfare 2 as looking like a greasy pizza stain.

Although, that’s not too much of an issue. Remember, you’re using a 5-inch screen. Even if you could crank the visuals to maximum, you wouldn’t really be able to appreciate them.

And you’ll be pleased to know that any gaming marathon won’t be cut short by any battery longevity issues. The GPD Win packs a battery that’s more than three times as large as that of the iPhone 7.

According to the manufacturers, the GPD Win will let you watch Netflix for about eight hours, and play games for between six and eight hours. Anecdotally, I found their estimations to be pretty spot on.

My biggest complaint with the device is the placement of the loudspeaker. Because, as speakers go, it’s excellent. Not only is it ear-piercingly loud, but it’s also crystal clear. Every spoken word, every gunshot, is exquisitely audible.

But annoyingly, the speaker is located where your palm goes when you grip the laptop, meaning that you invariably muffle it. That’s a shame, and a huge let-down in what is otherwise an excellent mobile gaming device.

I’m only going to briefly touch on this, because I don’t think the manufacturers ever envisioned the GPD Win as a laptop-replacement. Rather, it’s something that would complement an existing laptop- or desktop-setup, allowing you to effortlessly game on the move.

Nevertheless, it is a fully-functional Windows 10 computer. And if you try hard enough, you can get some shit done with it. Browsing was fluid and fast, and I was able to pig-out on open tabs without the device pleading for mercy.

The biggest issue I’ve encountered was in reading text. Remember, the GPD Win has a screen that’s roughly the same size as your smartphone, yet it uses the same version of Windows you’d use on a standard-sized laptop. As a result, words are squished, and you inevitably find yourself squinting to make out stuff.

On the web, that’s not much of an issue, as you can simply pinch to zoom. But there are a lot of apps that don’t afford you that option.

Thankfully, if this turns out to be such a big issue, you can always connect the GPD Win to an external monitor or projector through its USB-C or HDMI-C port.

Typing certainly takes a bit of getting used to. The GPD Win has a full QWERTY-keyboard, which is super cool. While the device is small, the keys are well-spaced and eminently pressable. I wouldn’t type out a long blog post on it, but for typing out URLs, tweets, and Wi-Fi keys, it’s fine.

My biggest irk is that it uses some kind of ghastly membrane-keyboard. Maybe I’m spoiled – after all, I was a BlackBerry user for many years – but I just didn’t dig the lack of tactile feedback.

Another complaint is that although it includes a built-in microphone, it lacks a webcam, essentially making it useless for video conferencing.

I wasn’t blown away by the wireless range either. From my bedroom, my Dell XPS 13 is able to get three bars, while the GPD Win failed to connect entirely. That said, it does support 802.11ac, so you can’t complain that much.

As a side note, it’s worth mentioning that there’s a thriving community of GPD Win hackers and enthusiasts, who have figured out how to get all sorts of Linux distributions running on the device. So, if you’re tempted by the hardware, but Windows isn’t your thing, you’re in luck.

But anyway, I digress.

As someone who travels frequently – usually from the comfort (ahem) of coach – the GPD Win is a no-brainer. With a battery life of almost eight hours, it can endure the entire length of a transatlantic flight. It’s powerful enough to handle most of the titles that clutter my Steam library.

But it arrives at an interesting time, when the mobile gaming market is changing, and in a state of flux.

I’m not just talking about iPhones and iPads. Earlier this month, Nintendo shook up the static and dusty console market with the Switch. This long-awaited hybrid console lets you play gorgeous, detailed titles like Zelda: Breath of the Wild from quite literally anywhere. And it does this at $299 – a full $150 less than what the GPD Win goes for on Amazon.com.

It’s probably worth checking out the Nvidia Shield Tablet K1. Although it lacks the built-in controller, the flexibility of Windows, and is a little bit long-in-the-tooth, this gaming-oriented tablet computer offers impressively beefy specs, a better screen, and is a little bit cheaper.

Despite that, I’d still recommend it, for the simple reason that it does something few other devices do – it gives you access to your entire catalogue of PC games, in a delightfully portable form-factor.

Yes, it has some pretty significant shortcomings – such as the short Wi-Fi range, and the irritating speaker placement – but it does let you play Half Life 2 on your morning commute. And how can you argue with that?

The GPD Win retails on amazon.com for $449. The device is also available through a variety of third-party resellers, too.

If you’re based in Europe, I recommend you get the device from GearBest. At the time of writing, it’s selling the GPD Win for €311 (or £272), with units shipping from its EU-based warehouse. The advantage of this is that you won’t get stung with import duties and taxes, which would almost definitely be the case should you import the device from China or the United States.