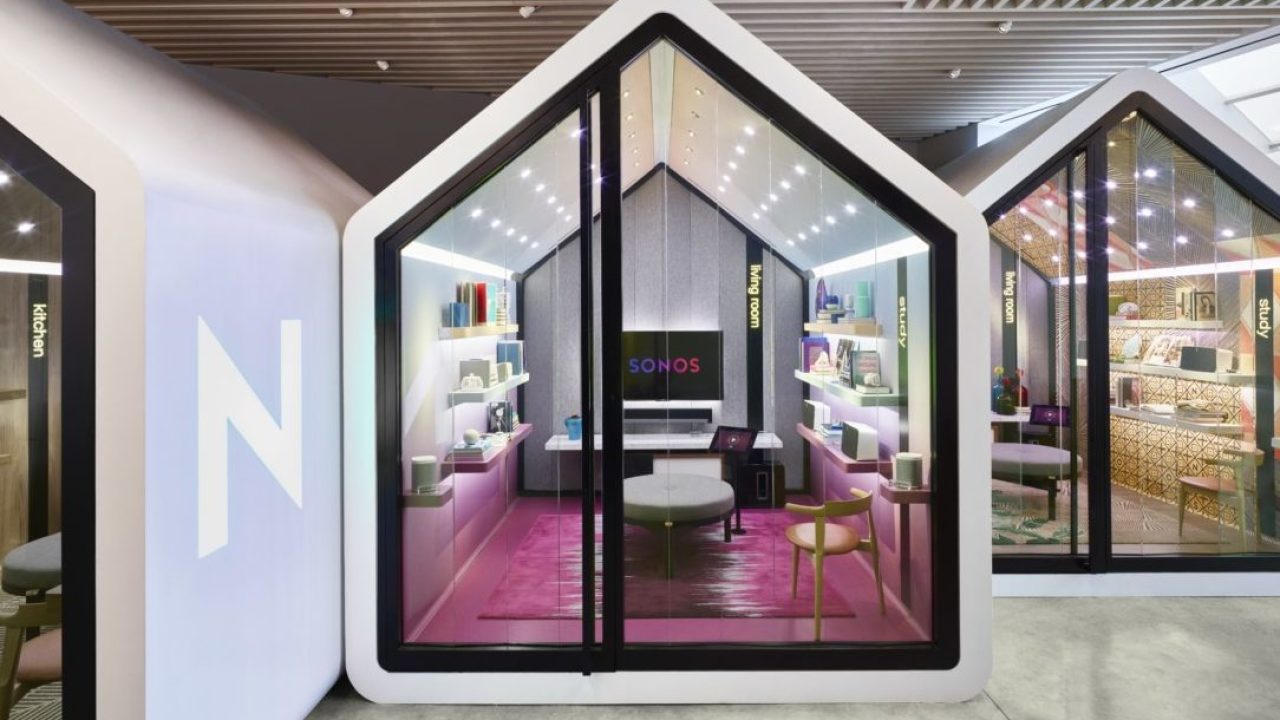 Sonos is preparing to launch its first its first ever flagship retail location in New York City on Tuesday July 19 (101 Greene Street in SoHo, for you locals). I was able to get a tour of the location in before it opens up to the public, and it’s pretty darn cool as far as tech stores go. It kind of makes the Apple Store look like a Radio Shack.

Of course, the store wants to sell you speakers, but it takes a relaxed approach to sales. Sonos says much interest in its product comes from people simply experiencing it in the homes of friends, so rather than bombard you with a boxes of products or loud music everywhere, listening experiences are mostly divided into seven ‘pods’ representing five different styled homes, as well as two lounge areas for customers to relax while they’re in the area. There will also be occasional public events hosted at the store as well.

You can see the unique layout as soon as you walk into the store. To the left is a series of shelves highlighting a set of products (currently, the excellent Play:5 speakers), as well as the aforementioned listening pods. The pods are acoustically sealed, and I was impressed at how little sound leaked from them as other members of the press blasted music while testing out speakers.

Towards the end, there’s an awesome ‘Wall of Sound,’ – which Sonos sees as the centerpiece artwork – made up of 297 speakers and acoustic foam. The company hopes this will be the piece to catch people’s eye when looking through the large windows from the outside.

Speaking of acoustics, the entire store was tuned by Sonos engineers to have about half of surface be reflective, and half of them absorptive. The detail is impressive, and you can see little acoustic touches throughout. There’s an absorptive, paneled ceiling reflective flat concrete floors, and zig-zagged glass on the pod doors.

But my favorite touch  are the microperforations covering much of the wall space. Basically Half of the walls are flat, but, the other half features tiny holes to improve the acoustics, while also being a (very) subtle visual nod to the Play:5’s design. You have to look close to see them.

To the right of the pods is the customer service center, which is really just a designated area with some tabletop space and artwork. Customer reps use handheld units, so they don’t need to be at a desk to chat about any problems you might have. The point is to make sure customers don’t feel like salespeople are breathing down their necks.

Meanwhile the actual products are just barely visible behind one of the perforated walls. Again, Sonos wants to feel closer to a home than a plain old store.

Downstairs, you’re greeted by another lounge space and listening room, as well as a virtual fireplace that extends the length of the Wall of Sound.


The pods themselves are basically cool little apartments. Each wall of the pod represents a different room, but can also be used to test a surround sound setup try out the multi-room listening experience. As is the theme throughout the store, you’re mainly meant to try out the experience for yourself without being harassed by store employees.

In each pod, there’s a tablet that will guide you through features, or simply let you use a standard Sonos app to select music and play them on one or several speaker. The only feature omission is TruePlay, which automatically calibrates your speakers to make up for acoustic deficiencies in your home. It’s one of Sonos’ best new features, but given that all the rooms are designed to well, sound good, the company can’t quite show off the feature effectively.

Sonos says there are currently no concrete plans to build more retail locations, but it’ll look at how the New York store performs before assessing building more. While it’s not like it will magically move millions more units, the lounge-y vibe and awesome design will certainly catch the eyes of curious passerby, and help spread the word. I wouldn’t be surprised to see more Sonos stores pop up over the next few years.