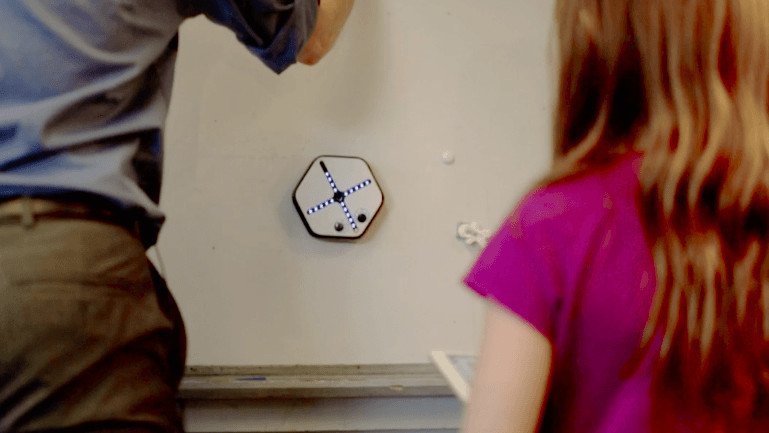 Teaching kids to code is probably something that will be part of school curriculum in the not-so-distant future or at least it should be. Being able to code is an invaluable skill and learning at a young age leaves time for ample discovery and exploration.

However, as anyone who has ever tried to teach a kid something that requires a decent amount of concentration knows, it’s no easy feat. Luckily, there are a number of toys and games to help make the process more engaging. The newest of these is Root – a small robot created by a team of researchers at Harvard that can teach anyone from a five-year-old to an adult how to code.

So how does it work? Root can be programmed for coders of all levels, including adults. You can use simple graphical icons or a basic coding language and move on to Javascript when the time’s right, so it’s not the kind of device that’s useless once you’ve mastered the task.

Controlled via an accompanying app, you can utilize Root’s array of sensors and magnetic panels to drive up walls or along whiteboards to make colourful images with a little pen that pops out on the underside. It also has a touch-sensitive bumper, which is handy in the early days. As well as drawing, Root can be programmed to make sounds and music.

The device has the flexibility and adaptability to be as complex or as simple as the coding and it’s that combination that should make it easier for kids or anyone keen to learn coding to get hooked.

The aim of the team who created Root is really to bring the device to schools. They want to see a Root in every classroom around the world and reckon its possible given that schools already have whiteboards and tablets at their disposals and the device can be used from Kindergarten to final year students so it’s cost effective in that sense.

They see coding as something that’s often viewed as abstract to the world with no real meaning when you’re a kid. However, by putting little robots with flashing lights and sounds in front of kids at a young age, it can help bring coding to life.

The approach to how the device runs is based on the idea that children are taught to understand consequences from a very young age by their parents and when they start school. Once they understand the concept, they know if they do one thing – another thing is likely to happen as a result. The same principles are applied to how the app lets them program the robot to begin with so it’s about robot behaviour.

Root isn’t available to buy commercially yet but you can reserve one for $199 now and the creators say it will be ready to ship “early next year” and interested schools can contact the team at the Wyss Institute at Harvard University.