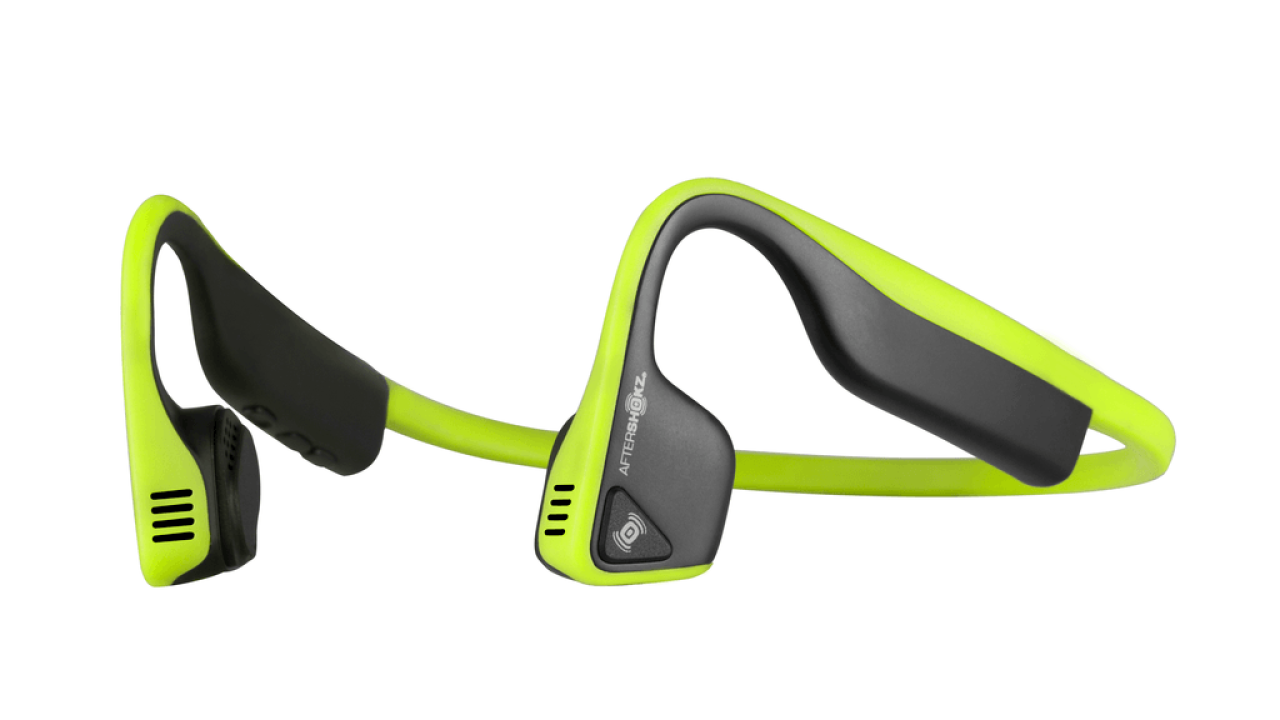 At CES last week, I met with representatives at the AfterShokz booth to discuss its line of bone conduction headphones. I also picked up a pair of Trekz Titanium headphones to try out somewhere much less noisy.

I have mixed feelings.

To those new to bone conduction, it’s important to note that these “headphones” aren’t designed to sit in your ear, like an earbud, or to cover it, like an over-the-ear headphone. Instead, they rest right in front of your ear, and deliver sound through vibration in your cheekbones. You don’t feel a thing.

As far as looks, fit and features go, AfterShokz is miles ahead of any other bone conduction headphone I’ve tried. The headset weighs about the same as a good set of ear buds and has an uber-flexible lightweight band that’s comfortable enough to make you forget you’re wearing it.

They also don’t really move once you have them on. If you’re a jogger, this isn’t going to fall out of your ear or slip around like a traditional headphone. Once it’s on, it stays put, and it’s comfortable to boot.

Not having to pull out earbuds or remove over-the-ear headphones for a quick conversation is what makes me want to believe in this technology. It’s a practical feature that could make this a lifesaver for joggers and others who otherwise might miss environmental noise with a traditional earbud.

As cool as this headset is, what has always been a pain point for bone conduction technology is that its biggest benefits (weight, flexibility, open to ambient noise) also lead to design challenges that are difficult to overcome for those looking for a superior listening experience.

The inclusion of ambient noise often means you’ll have to turn the volume up beyond the point you would an earbud. Not a big deal by itself, but there’s already a fair bit of distortion in the lower frequencies; more volume just compounds the problem.

Higher frequencies are rather muddy rather than bright and clear like you would expect. As for the mids — well, they’re there, but lack any real punch. This is less of a condemnation of AfterShokz and more of a problem with bone conduction headphones in general.

The AfterShokz offering wasn’t nearly as shallow and tinny as other bone conduction headphones I’ve tried — but they won’t knock your socks off either.

Although this model demonstrates an improvement in bone conduction audio, the relatively new speaker technology really hasn’t worked out a way to deliver (at least) earbud-like performance. The technology has a lot of promise, but it’s just not there yet.

For those looking for comfortable, lightweight and flexible headphones that are practical in a fitness sense, these are a great choice. For everyone else, it’s probably best to just stick with earbuds or over-the-ear headphones.

The Trekz Titanium model I tried out is available for $129 online at the AfterShokz website.