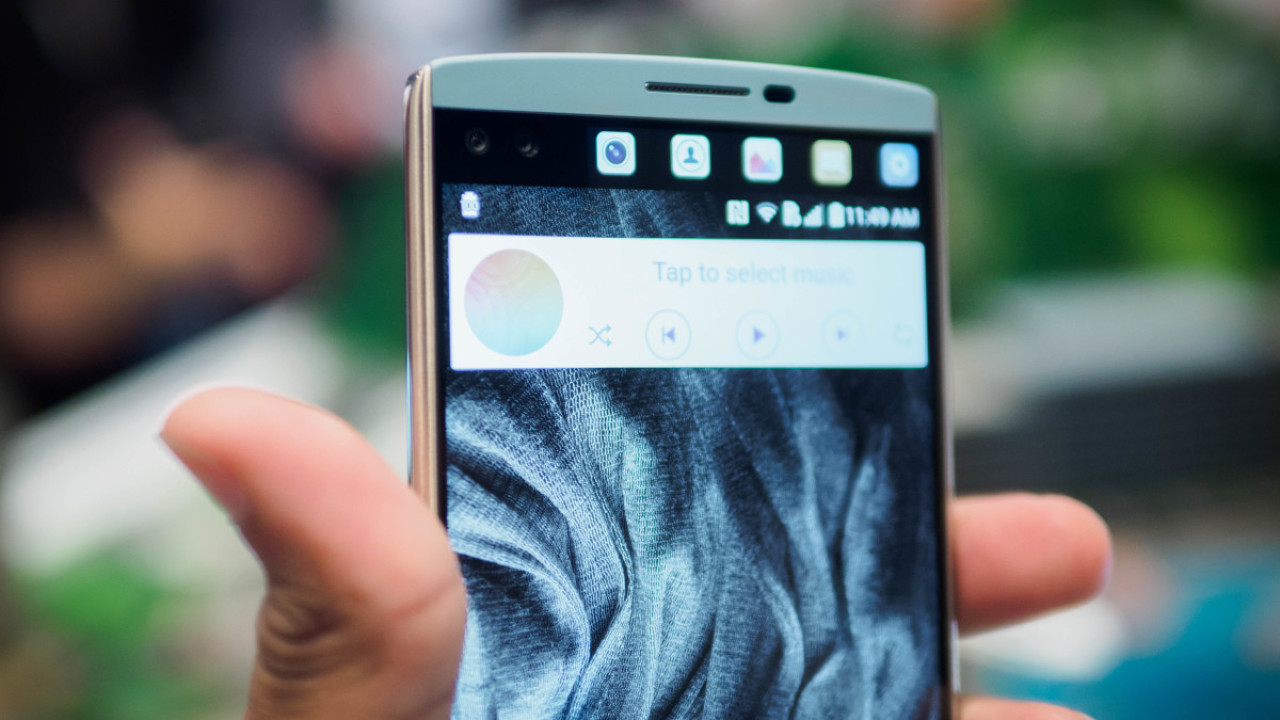 LG has a new flagship line on the block, and it’s starting with the V10. Unveiled at an event in New York today, the 5.7-inch phone takes a lot of what people liked about the G4 and supercharges it with an improved build and an even more powerful camera – especially for video.

Though the phone sounds pretty gimmicky on paper (Why is there a second screen? Who needs two selfie cams?) I came away very impressed from our brief hands-on.

It took me about two seconds of holding the V10 to conclude that it’s easily LG’s best designed hardware. I’d put it up there with the iPhone 6 and Note 5.

The phone is a combination of stainless steel and silicone, and I appreciate that neither front or back look like any other device out there.  The smooth steel sides are classier than the old fake-metal plastic, while the removable silicone back adds a reassuringly grippy layer of durability. LG has experimented with many materials for its removable covers, but I think the V10 strikes the best balance.

In fact, LG is touting ‘military-grade’ durability. While it’s not flexible like some other LG phones, the company says the ‘Dura Skin’ silicone and steel frame allows it to easily withstands drops from four feet. Moreover, the back remains removable, so you can always get a new one if it gets scratched up. No mention of waterproofing, however.

As is LG’s style, all your buttons are mounted on the back panel under the camera, though this time the power button doubles as fingerprint sensor (a first for LG).

The device features a 5.7-inch Quad HD panel (513 ppi) and a second 2.1-inch panel that’s always on and sits above the notification bar and next to the selfie cams (more on this later). The entire front of the device is protected by Gorilla Glass 4.

The phone is powered by a Snapdragon 808 chip – not the fastest chip around, but it’s reliable – flanked by an impressive 4GB of RAM (1GB more than the G4) and a default 64GB of ROM that’s mercifully expandable to up to two whole terabytes.

It’s gonna need all that storage too, because you’ll be using the cameras a lot. On the rear, the 16MP sensor and F1.8 lens array is the same as on the excellent G4, but you’ve also got two 5MP front facing cameras set to different focal lengths – one for solo shots, another for group ones.

The battery is only 3,000 mAh, the same as a the G4. That’s just okay, and perhaps a little worrisome given the V10 has a larger display(s), but hopefully LG has worked the same kind of battery magic Samsung managed with the Note 5 (which has also has a 5.7-inch screen and a 3,020 mAh battery). At least it comes with quick charging by default, and you can swap batteries whenever you want.

The video specs are where the V10 easily outclass any phone before it. It shoots up to 4K at either a standard 16:9 or a cinematic 21:9 aspect ratio, and supports 60, 30 and 24fps at several bitrates. If you’re not familiar, 24 fps is a big part what gives professional video cameras that “movie-like” quality, and as far as I know, this is the first time its been seen on a major smartphone.

You get full manual control during recording, including shutter speed, ISO, exposure, white balance, focus, and zoom. Video is stabilized by a combination of optical and digital OIS, and there is an impressive set of onboard editing tools and quick sharing features.

Perhaps crazier than the video, there are three directional microphones you can manually monitor and adjust to cut out wind noise, or to focus on nearby or far sounds.

The V10 offers more control during video than most DSLRs and mirrorless cameras. Oh, and there’s still an IR Blaster, too.

The second screen allows you to swipe between a customizable set of quick-launch apps, and notifications will appear there when watch full-screen content. If you’re listening to music, you can play, pause or skip without sliding down the notification bar. Yes, it’s a gimmick, but it could be useful.

It also has specialized functionality within LG’s apps. For example, it can control zooming while in the camera, so you don’t clutter the screen with more controls. When the phone is off, besides showing notifications, the second screen allows you to do things like connect to Wi-Fi or turn on the flashlight.

Speaking of screens, LG noticeably improved its Quantim IPS display for the V10. Some people thought the G4’s screen was a little dull and cool, so they’ll be happy to hear the V10 is the tiniest bit warmer and colors are more pleasantly saturated. Blacks seemed deep for an LCD and brightness was about the same as the G4, which is good.

Performance was solid, with no noticeable hiccups. Switching between apps was faster than on my G4, and about the same as on the Note 5 – though that could be partly attributed to being a fresh device. A LG rep demoed speedy fingerprint detection as well.

For stills, the camera app appeared nearly identical to the G4’s, which is not a bad thing. You have pretty much all the manual controls you’d want, though it’s still a little slower shot-to-shot than the Note 5. We’ll have to see how final image quality holds up in the test lab though.

As for those dual-selfie cams, it seems like vanity overkill, but there’s at least a tiny bit of photographic merit to it. As a general rule, filling up a frame with a wide-angle portrait is less flattering than doing so with a narrower field of view, so the two cameras could help you achieve more attractive selfies depending on whether you’re flying solo or with friends. But seriously, two selfie cams.

Returning to video, it’s much too early to make full conclusions on video quality, but I’d argue the level of control here is more important anyway, and we already know LG’s sensor is worthy. Film-makers can simply do more than what most other cameras allow –  interchangeable lens cameras included – and the sample footage LG demo’d looked nearly broadcast quality; we’ll update this post if we can get our hands on the video.

The V10 has a few cheesy-looking tricks, but it also hits a ton of checkmarks. The specs go toe-to-toe with other flagships, it has a fingerprint sensor for Android Pay, the design is one of the most unique and seemingly durable around, and the video chops are miles ahead of what competitors offer.

Besides, LG is pretty much your only flagship choice if you want both expandable storage AND a MicroSD card slot, which greatly pleases the Android die-hard in me.

There are two big question marks left : battery life and price. But if the V10 can last a day on a charge and isn’t exorbitantly overpriced, we think LG could have a winner in its hands.

The V10 goes on sale on in November in the US, and will be available from Verizon, AT&T  and T-Mobile.