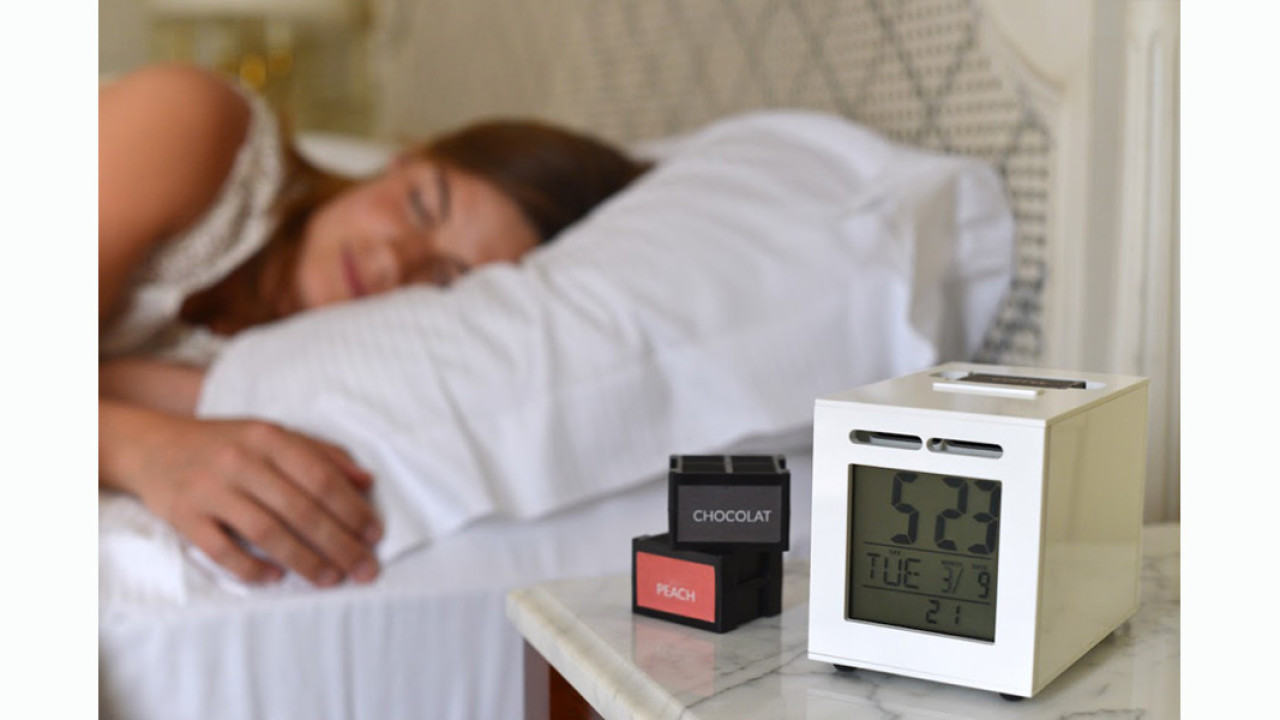 For most us, waking up to an alarm clock is no fun — even if it is carefully calibrated with a favorite musical selection. Something about the sudden combination of sound and light can be inherently jarring — a real downer.

Teenage developer Guillaume Rolland, a French engineering student, has come up with a way to ease that frustration with an olfactory “alarm” clock called SensorWake. At the appointed time, instead of sound or light, SensorWake softly emits a scent that promises to awaken you in two minutes or less.

Launched today as a $50,000 Kickstarter campaign, this patented alarm clock awakens you with a variety of aromas such as espresso, peach, seaside and even the smell of dollars (the ink used to produce US currency).

Guillaume Rolland gets a wake-up scent.

Users set the time they want to wake up — just like a regular alarm clock — and insert a scent capsule into the body of the unit. When it’s time to wake up, the device slowly releases the fragrance until it is strong enough to stir you from your slumber. Scent capsules are recyclable and can be used 60 times.

Rolland says his tests have shown SensorWake to have as much wake-up power as a traditional alarm clock — he and his sisters were also among some 100 test subjects.

“The idea came to me last year, when I was 17 and had to wake up very early for school — like 5 am,” Rolland told TNW. “It was a really big problem. I tested all of the alarm clocks and my favorite music, but it was still very frustrating, so I just tested waking up only with a smell, and I tried it out with my three sisters. When I saw that it worked, I decided to create a prototype.”

When the campaign reaches its financial goals, more fragrances will be added, Rolland said. He envisions users being able to order custom scents as well as seasonal or holiday scents for Valentine’s Day or Christmas, for example. Replacement scent capsules will cost $6.

Just in case a stuffy nose thwarts SensorWake from its gentle wakeup mission, have no fear of oversleeping. If you are not up in three minutes, an audio alarm backup will sound.

The SensorWake Kickstarter will last 35 days. If successfully funded, the product will ship in November.