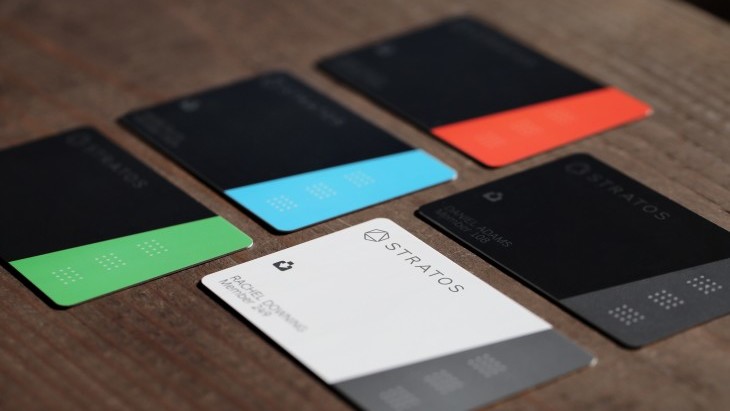 Everyone wants a piece of the payments space and if the excitement for Coin proved anything, people want a single card that replaces all the separate ones they’ve already carrying around.

Stratos, launching today, is a new payments card that exists to replace every single plastic card in your wallet. The card features Bluetooth connectivity and can be used everywhere you’d expect, like at ATMs, restaurants and gas stations.

Using the companion mobile app, you can switch between cards and track your spending. The company is working to add further features like location based recommendations based on your spending history, virtual card downloads (think gift cards or pre-paid cards) and more.

The amazing thing about Stratos is that the company says you can load basically anything that features a magnetic strip onto it like credit, debit, loyalty, membership or even gift cards.

Naturally, one should worry about security with a single card wielding such power, but Stratos says it’s got you covered. If your card isn’t near your phone for a specific amount of time, the card shuts down and can’t be used until it’s close again.

The company also says it uses “bank-level” encryption and stores card details behind either a PIN or Touch ID on your device.

What’s cool about Stratos’ approach versus a solution like Apple Pay or even Samsung Pay is that it says it’ll work on day one with 100 percent of merchants in the US, since it uses technology that already exists.

Instead of requiring a one-time purchase, Stratos is a recurring yearly membership of $95 per year or $145 for two years. The idea behind this is simple; the company wants you to get the most “complete” experience, with a new card every year that features the latest technology or a replacement if you lose it, similar to how your bank works.

That upgrade window makes sense, since the company has plans to adopt more advanced payment methods in the future like EMV and tokenization as card standards change. Stratos is working directly with banks and card providers to enable those technologies.

At launch, Stratos is only available in the US but will work globally anywhere that accepts a magnetic strip card. The company hopes to expand sales as it adds other technologies and support in the future.

The company has received over $7 million in venture backing so far and believes that it has a shot at being the next big payments platform.

If the card does everything it says it can and is able to eventually tackle chip cards too, Stratos could have a shot at being the single card you carry in your wallet.

Stratos card is available for purchase now in the US, and will begin shipping this April.