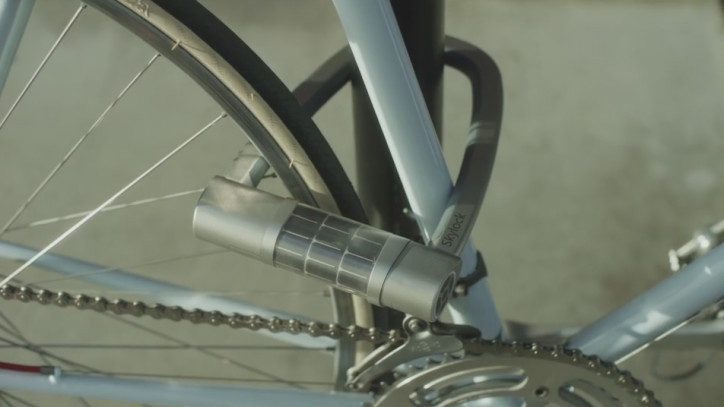 Cyclists get a rough time of it on the roads, and if being side-swiped by cars, trucks and buses all day long isn’t enough, when they finally dismount they still need to lock up their bikes.

To that end, Velo Labs‘ Skylock, a new ‘smart’ U-lock for your bike created by ex-Boeing and Jawbone engineers is looking to crowdfund $50,000 in order to bring the first batch to consumers.

Rather than use a platform like Kickstarter or Indiegogo, Velo is using its own site to host the campaign so it can “maintain control over the timeline and the manufacturing process,” a spokesman told us.

However, unlike a traditional bike lock, you can unlock the Skylock by simply pressing a button on the app, or by setting the proximity settings to automatically unlock when you’re within a certain distance. Consider it keyless entry for your bike.

You’re thinking “what happens if I don’t have my phone, or the battery dies?”. We were too. Handily, the Skylock does still allow you to unlock it using a code via the capacitive touch pads. And it has a solar charger, so its own battery should never die.

Beyond the actual locking of your wheels, the Skylock also has an anti-theft feature that uses the built in accelerometer to alert you (via the app) if anyone starts messing with your bike. You can also change the sensitivity settings on this to ensure you’re only alerted when it is someone actually up to mischief, rather than a cat brushing past.

There’s also a crash detection feature that will pop-up an alert on your smartphone if it detects that you’ve taken a tumble. When it does, you have the choice to either dismiss the alert or press a single button to call for help. Of course, if it’s a particularly bad crash, there’s a chance you won’t be able to reach for your smartphone, or that it would have been damaged somewhere along the way, but it’s good to know the option is there for less serious scenarios.

Rounding off the list of features, Skylock also allows the bike owner to grant access to another user through the app, which is handy if you share a bike with a friend or partner. Alternatively, you could charge for access.

If you’re interested in the project, the Skylock is set to retail for $249 when it launches, but it’s being offered for a discounted price of $159 for the duration of the crowdfunding campaign.