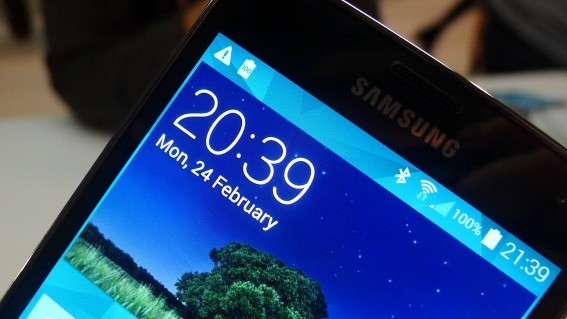 If you’d rather pay the full retail price, with no commitment, you’re look at a $649.99 price tag. Shipping for the pre-orders will begin in “early April” with no specific date given.

Since tomorrow is apparently Samsung day at AT&T, the carrier has put together a promotional offer: you can save $50 off a Samsung Gear 2 or Gear 2 Neo when you purchase a Samsung Galaxy S5. The deal ends on June 5, or while supplies last. It’s not clear why the Gear Fit is specifically excluded.

The Galaxy S5 sports a 5.1-inch full HD (1080p) Super AMOLED display, a new heart rate sensor under the 16-megapixel rear-facing camera, and a 2.1-megapixel front-facing camera. This is all powered by a quad-core 2.5GHz processor, 2GB of RAM, a 2800mAh battery, and either 16GB or 32GB of onboard storage (expandable via microSD card for up to 64GB of extra space).

While the S5 runs Android 4.4 KitKat, Samsung’s Gear watches have ditched Google’s mobile operating system for Tizen. Nevertheless, it makes sense Samsung is trying to push its smartphone and smartwatch devices together: the latter simply isn’t a proven market yet.