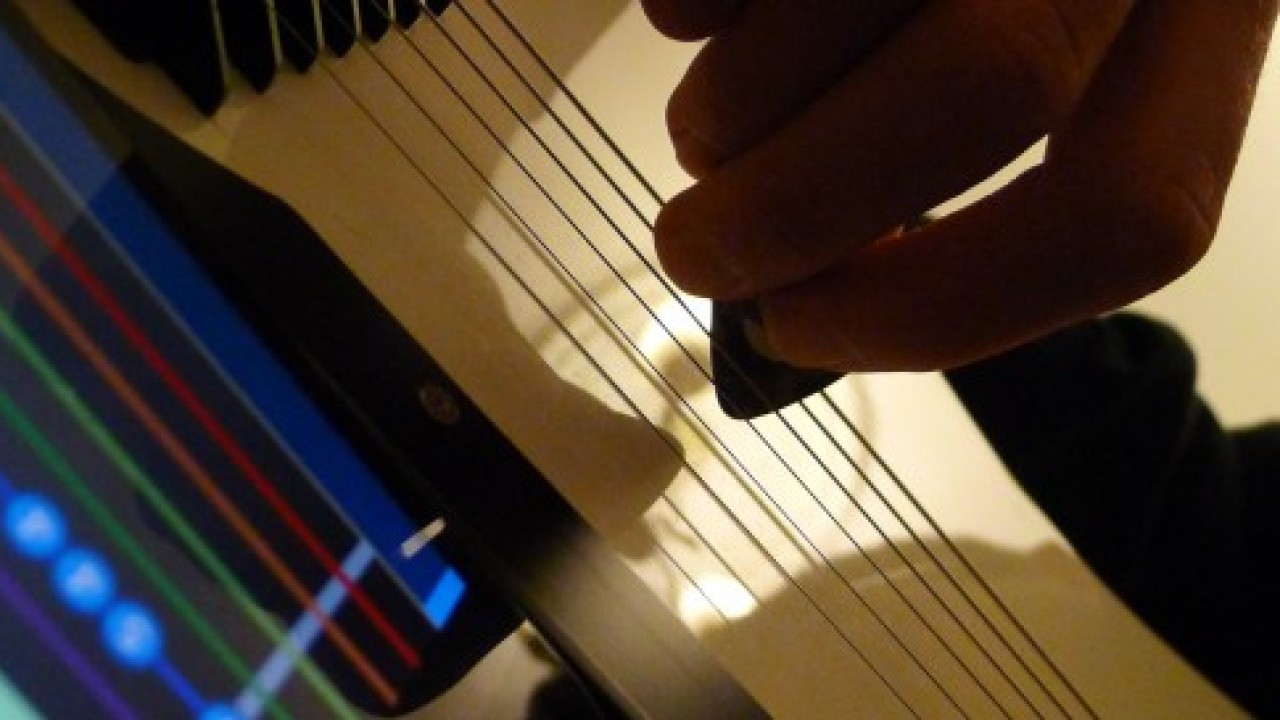 Learning to play the guitar is hard. Lessons are expensive and if you want to teach yourself, it’s difficult to know where to begin. Some will recommend music theory – the basic rules that govern all musical instruments – while others will tell you to just grab some tabs and begin strumming.

In June 2012, Incident successfully crowdfunded a guitar that connected to your iPhone and then lit up an LED fretboard to show you how to play. Imagine Guitar Hero, but with an authentic instrument that doesn’t require a TV to show you which strings or frets you need to hit next.

I played the bass guitar periodically as a teenager, but I was terrible and knew that my small stature was ill-suited to an instrument with such a large neck. Learning a six-string guitar has always appealed to me, but I’ve been waiting for a product that can analyze my performance, show where I’m struggling, make suggestions and track my progress.

(Note: Please ignore the small chip in this photograph. Shipping an instrument from the US to the UK isn’t always straight-forward…)

The gTar is a simple idea, but its lofty ambitions make it a refreshing amalgamation of modern technology and an instrument which, broadly speaking, hasn’t changed for decades. If it works, Incident has the opportunity to redefine music tuition in a heartbeat.

For all of its technological upgrades, the gTar still looks and feels like a traditional electric guitar. The body is solid wood, while the steel strings are held in place with six nuts on the face-side of the headstock. These materials, combined with the plastic fretboard and scratchplate (which gTar uses as a dock for your iPhone) give it the heft and presence that you would expect.

That’s important, because part of gTar’s allure is how closely it resembles an authentic instrument. If you’re going to learn on this device, it should be a seamless transition to any other electric guitar, otherwise you’ll need to readjust your technique and how you handle the size and shape of the instrument.

While the gTar isn’t the most gorgeous guitar I’ve ever come across, it’s pleasing to the eye. Incident has gone for a traditional look, taking a few cues from the classic Fender Stratocaster, which should give it a broad appeal. There’s little sense in offering a niche design and immediately alienating half of your potential customers, after all.

Two strap buttons are fitted at the top of the body and behind the artificial pickups, so you can practise either seated or standing up. The screw holes in the back of the neck point to the components nestled inside, and at first it’s odd to run your hand past them. They’re not irritating or obtrusive in any way, but while practising it’s hard not to notice them in your peripheral vision.

Along the edge of the base, where you would normally plug in a cable for your amplifier, is a power button, USB port and audio out (1/4″ line output). It’s worth noting that while the gTar runs on its own power supply, it won’t charge your iPhone when you dock it. I usually squeezed at least a few three-hour sessions in before hitting the red, which I felt was fine for a device like this.

At the moment, the gTar ships with a 30-pin connector for the iPhone 4/4S. A dock that’s fitted with the Lightning connector, adding support for the iPhone 5,5s and 5c, is expected to ship early this year, however. The docks will also be swappable, so you won’t need to buy a whole new gTar to upgrade.

In all honesty, the new dock can’t come soon enough. Incident is already at a disadvantage because its gTar app is currently only available on iOS devices; to restrict that even further to older iPhone models is a problem that should have been fixed sooner. You can circumvent this problem with a Lightning to 30-pin adaptor (as I did for this review) but it’s an awkward workaround.

By default, the sound of the gTar will come through your iPhone, rather than any external amplifier. It’s a great idea, as it allows you to play the instrument aloud in any location – perfect for when you’re at the park, the beach, a campsite or any other location outdoors.

Even with a little acoustic amplification from the cradle, the iPhone is far from a perfect substitute for a dedicated speaker. Instead, a decent set of headphones are probably your best option when practising at home.

It’s also worth noting that because the gTar creates signals via MIDI (there are no pickups under the strings), you don’t need to worry about tuning the gTar at the headstock. The strings will probably sound off-key when the gTar is turned off, but as soon as you dock your iPhone everything becomes crystal clear again. It’s a strange experience but negates the need for tuning, which is a nice touch.

The success of the gTar rests on its software experience and unfortunately, it’s a little underwhelming. While there are some interesting ideas on display, the app lacks the structure, breadth of content and detailed analytics needed to adequately teach you the iconic instrument.

The app has two modes, called play and free play. The former is a structured mode that teaches you specific songs and scales; they’re ranked in green, yellow and red to indicate their difficulty, although you can also set the track to easy, medium or hard before you begin each one.

On easy, you only need to play the open strings to progress. The frets will illuminate, but you’re not required to hold them down. Every time you strum or pluck the string, the correct note is produced and you’ll see the next chord or fret position move from right to left across the screen. If you’ve ever played Guitar Hero, you’ll have a good grasp of how this all works.

Better yet, gTar will ignore any mistakes that you make. So even if you’re hopeless on the first day, you’ll be able to play the song correctly – it’ll just be at a much slower pace to begin with. Termed SmartPlay, It’s a teriffic feature that should appeal to newcomers; so unlike a traditional guitar, you won’t have to endure some truly horrendous sounds for the opening few hours.

Medium is a little trickier, making fret positions a requirement to continue through the song. SmartPlay is still in full effect – so you still won’t hear any of your bogus notes – but it’ll make you comfortable playing with both hands simultaneously. During my time with the gTar, this is the mode that I used for most of my practice sessions.

On hard mode, SmartPlay is switched off and you’ll hear absolutely everything that you play on the gTar. It’s disappointing, however, that the app still waits for you to play the correct note before illuminating the next one. As a result, I never knew if I was playing in time with the music. You can perform each track as fast or as slow as you like, which is fine for scales and basic music theory, but ambiguous and confusing for songs with a specific BPM.

Even in Guitar Hero and Rock Band, you need to hit the relevant buttons in time (or at the same pace) as the original track. gTar needs a similar implementation – an expert mode, if you will – that will play the song in real-time and illuminate the notes in the correct places, regardless of whether you played them accordingly.

gTar will give you a score at the end of each rendition, but I wanted more in the way of feedback. Information is crucial for progression and I felt like there was a huge opportunity here to show where I was struggling. In what places do I pause the longest? Or hit the most incorrect notes? What percentage of notes were correct? How can I improve my technique?

Finger placement is also crucial for the guitar, but I never knew when I should be holding a fret with my index finger, middle finger, ring finger or pinkie. It was particularly frustrating for chords, or runs which required strumming a series of different frets in quick succession.

Another stumbling block for gTar is its music library. When you’re learning the guitar and you plug it in for the first time, you inevitably go to your favorite songs first. That’s part of the appeal for Guitar Hero and Rock Band – playing classic songs that everyone loves and recognizes. The selection within the gTar app is pretty limited right now, with few recognizable names aside from classical music composers such as Chopin and Beethoven. Incident says the gTar app library is “constantly growing”, but it’s a long way off the vibrant, contemporary selection that I think consumers will expect.

I was also hoping for some structured progression or guidance throughout the app. A series of lessons that I could complete, or a recommendation for which song I should try next. Although each song has a difficulty indicator, I often felt that I was stumbling aimlessly through the gTar app’s song library.

Free play mode is the other half of the software experience, giving you free reign over the fretboard without any specific songs or scales to worry about. It’s the perfect place to kick back and mess around, with a number of light-hearted instrument effects (upright bass, piano, marimba, etc.) to experiment with.

It’s a lot of fun, although I found that playback was often laggy or unresponsive. Perhaps this was because of the Lightning to 30-pin adapter that I was using, but it did affect the overall experience. I’m not the only one to have reported this issue, but the smart pick – which has a metal tip and a wire that connects to the bottom of the gTar – is noticeably more accurate. It’s not an ideal solution though, and the extra wire can be a little annoying.

The gTar isn’t restricted to its own app, however. The device spits out CoreMIDI data, which makes it compatible with a number of other iOS apps, including Argon, Cassini, NanoStudio and Sunrizer XS. I won’t delve into each of these individually – I’m too inexperienced as a guitar player to comment on them – but it represents an opportunity for other app developers to create a deeper and arguably more rewarding learning environment.

The gTar can’t replace a professional tutor. It won’t tell you when you’re holding a pick incorrectly, or if you’re bending your wrist inappropriately to reach certain frets. From a software perspective, that’s probably impossible. Even in the app’s current form though, I was left wanting more. As the saying goes, “knowledge is power” and I wanted more of it. Deeper analysis and better recommendations as to how I could improve, or what to focus on next.

SmartPlay mode is a brilliant idea, but the app needs to tackle the concepts of timing and finger placement too. The gTar holds a tremendous amount of potential, but it’s not the fun, authentic and dynamic educational instrument that I had hoped for just yet.

At $399, it’s not cheap either. You can pick up a decent electric guitar, amplifier and cable for the same amount – or even cheaper, depending on your budget – and learn with some free tabs, resources and songs on the Web. I’m hoping Incident has the chance to develop this idea further though, because there’s a powerful idea here just waiting to be realized. A guitar that is not only authentic and compelling to play, but capable of teaching you music theory and your favorite songs as they were meant to be heard.