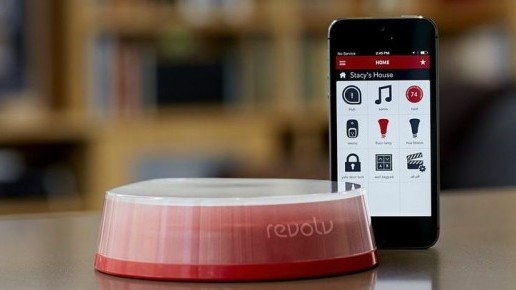 Revolv began shipping its $299 home automation hub today, bringing to market a reasonably-priced solution for controlling your devices from one app. We’ve been testing the hub as part of a smart home setup for the past couple of weeks and have been really impressed with its ease of use and versatility.

Once you’ve connected Revolv to your Wi-Fi network and your other smart home devices, you can use it to program actions and remotely control your setup from a single app. Revolv, which was formerly known as Mobiplug, is only available on iOS at launch, though the company has experimented with an app for Google Glass.

The device comes in a compact tear-shaped form factor. It’s not exactly sleek, but it should blend into your home without sticking out.

In order to accommodate different wireless technologies and protocols from device makers, the Revolv ships with seven wireless radios and support for 10 wireless languages. Not all of them are active at launch, but you’ll be able to use Z-Wave, Insteon and Wi-Fi from day one. ZigBee support is coming in the first quarter of 2014. The remaining radios will be activated through software updates down the road.

You won’t find a Bluetooth radio on board, but Revolv co-founder Mike Soucie said that’s because Bluetooth doesn’t have a wide enough range to make it viable for a wireless hub.

Here’s the equipment I’ve been testing the hub with:

Including the Revolv, that’s about $1,400 for the setup, and it doesn’t include other supported devices, such as the Nest thermostat and Belkin’s WeMo Switch. Chances are you might already have a few of these around if you’re interested in smart homes. Soucie said the company’s goal is to eventually cover 95 percent of devices by the time all of Revolv’s radios have been utilized.

Setting up the whole kit was painless, though it’s worth noting that since I have to send everything back, I didn’t do any installations that required modifying my home. The Yale lock, for instance, came on a demo mount, so I could program and use it like a real lock without having to actually set it up.

Revolv recommends that you have your other devices already configured before turning on your hub, so I set up the Sonos and Philips Hue bridges, screwed in the lightbulbs, and programmed the lock. Next, I plugged in the Revolv and loaded up the app. The hub uses a nifty trick to log onto your wireless network by having you type in your password to the app and then hold your phone over the unit as it blinks your camera flash on and off. I’m not sure what kind of magic is going on here, but the Revolv uses the pattern of the flashes to grok your password and then sign onto the network.

Once logged on, the Revolv starts looking for supported devices. An automated search picked up most of the appliances that were already active, but I also had to manually add a few pieces that needed to be in a discoverable mode. The whole process took about half an hour.

Revolv says it plans to add bridge-less support for Sonos and Philips Hue, which will make setup for those systems a lot easier. It’ll also be a nice bonus if Sonos ever stops including a bridge with its speakers.

Depending on the size of your house, placement of the Revolv might be an issue. You’ll generally want it within a 65-foot radius of all of your devices, though devices connected over a Wi-Fi bridge should be fine as long as they’re both on the same network. I didn’t run into any problems with a setup that spanned several rooms in a single-floor house, but it’s something to keep in mind if your gear is really spread out.

When you’ve got all your devices connected to the Revolv, then you can start having some fun. You’ll have access to basic controls for all of your devices from within the Revolv app, but things get interesting once you start adding actions. The Revolv supports four main types of triggers: motion, time, location and manual. Using these, you can set lights to turn on at a certain time, or when your motion sensor detects activity, or you can program your door to automatically lock when you leave your house.

Maybe I’m paranoid, but I still have trouble being comfortable with using a smartphone to unlock my front door. Key locks aren’t exactly secure either, but the added convenience of a smart lock doesn’t seem worth the risk that could come from hacking or bugs. Ultimately, it’s an issue that needs to be addressed by the smart home industry at large. Wireless-connected thermostats, for instance, also pose a risk if tech-savvy pranksters decide to fiddle with your controls.

When I asked Soucie about how secure the Revolv is, he explained that the device relies on how well you lock down your own router and phone.

“We’re going to enable you to decide how deep do you want to go as far as the security level. We realize there are trust issues. We’re kind of relying that once we’re underneath your firewall, there’s a level of freedom,” he said

Revolv from day-one is already a solid offering, but much of its appeal lies in its potential. The company is well on its way to fulfilling its vision of unifying the connected home under a single app, but it’s unlikely to supplant the apps from each of the other device makers.

The launch group of supported devices covers many of the most popular consumer-grade solutions on the market, but it’s also missing a few key players. Dropcam, which is interested in becoming its own connected home hub with its Pro camera, is conspicuously missing from the list. Soucie said Dropcam is “definitely on [Revolv’s] radar.”

I’d also like to see deeper integration with Revolv’s existing partners. The app’s control of Sonos, for instance, only allows play/pause, moving to the next or previous track and adjusting the volume. I realize it’s a longshot for Revolv to tap into Sonos’s existing integrations with music services, but I would like to see the ability to set speaker groupings. Hue support also remains fairly limited, lacking many of the fun presets from Philips’s own app.

Revolv says it also plans to add ambient learning traits to its app and device, so that it can predict what you want to do. It’s a lofty promise that’s still some way out, but considering the amount of data that Revolv will be collecting from all of your appliances, it’s definitely possible.

In order to live up to its potential, Revolv will need to scale. It raised a $3 million round last year, but for a hardware startup, that’s barely enough to get a product out the door. Since Revolv started taking reservations in August, the company has racked up 2,500 reservations, enough to sell out its first two production runs. That may seem small, but it’s almost 40 percent more than Revolv had anticipated.

I’m confident that Revolv owners will serve as an effective marketing force for the company once their friends see what the device can do, but the firm might still need to fund another round to give it time and resources to ramp up.

It’s actually quite remarkable what Revolv has done with just $3 million. At launch, the hardware impressively manages to make it easy and affordable to outfit your home with smart devices. It also reduces some of the app fatigue that has set in from having to manage individual apps for each of your different systems.

The recent wave of smart home products like Nest and Sonos have given the space a mainstream consumer appeal, and Revolv greatly advances that trend by linking together devices. If you’ve been thinking about picking up a few gadgets to connect your home, Revolv makes it much more tempting to finally pull the trigger.